The Rolex Submariner reference 16803 is both a vital reference of the world’s favorite luxury dive watch and a surprising one. Its importance stems from the fact it introduced a whole laundry list of new features to the venerable Submariner, elements that we now take for granted. However, with the ref. 16803 being launched as recently as 1984, it is surprising that it took Rolex so long to produce the watch in its signature bi-metal combination, Rolesor.

There has been a solid gold Submariner since as early as 1969, starting with the ref. 1680/8, from the generation that introduced a date function. However, seeing as the brand had been making watches with its patented combination of a stainless steel case with a gold winding crown, bezel, and central bracelet links since the 1950s, it seems odd that its most famous creation had to wait for more than 30-years for its two-tone debut.

Additionally, the reference 16803 wasn’t around for very long. The whole of the three-piece ref. 168xx series is considered a transitional series (one that carries over rudiments of previous iterations while also presenting noteworthy updates) and the ref. 16803 was the most fleeting of them all. In production for only about four years, it was replaced in 1988 by the ref. 16613 that would go on to remain in production for the next two decades.

This makes the Rolex Submariner Date 16803 an especially rare beast on the pre-owned market. However (and here’s that word ‘surprising’ again), it remains one of the most affordable examples of any Submariner available. Below, we have put together a guide to tell you everything you need to know about the Rolex Submariner ref. 16803 – an underappreciated icon. 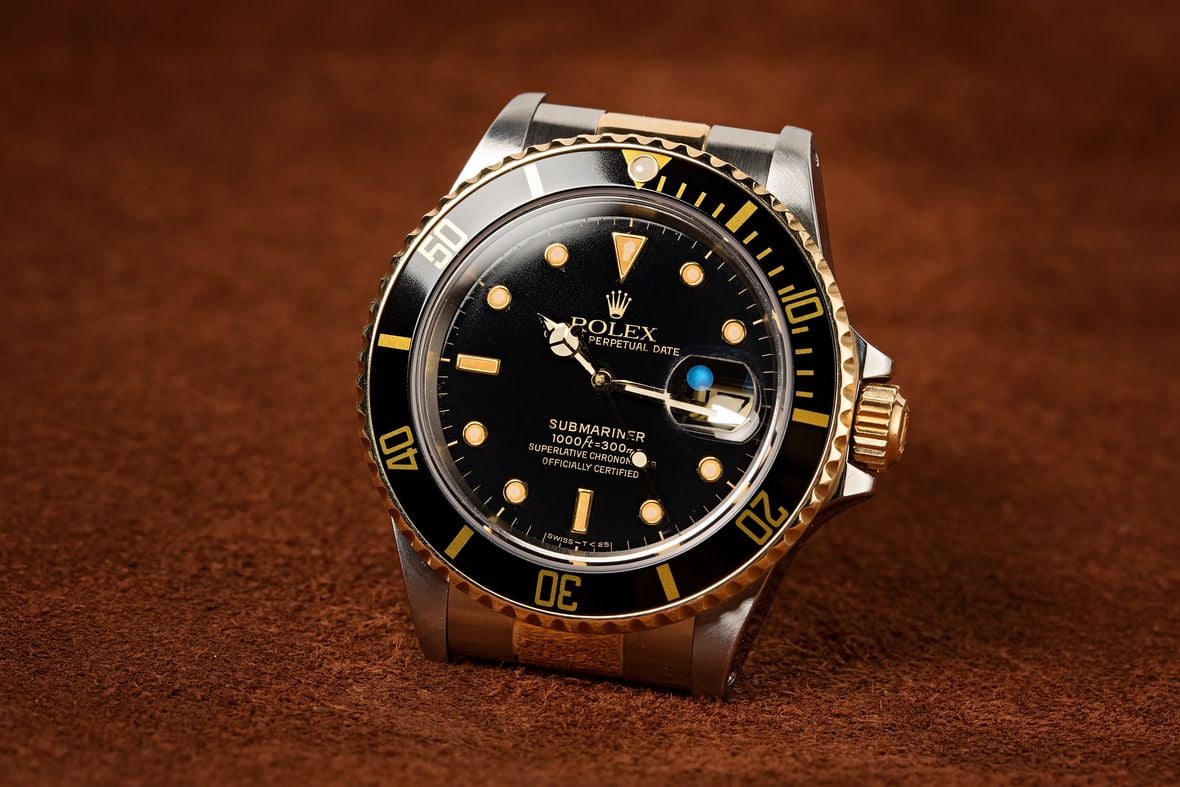 Click here for our ultimate buying guide on the Rolex Submariner. 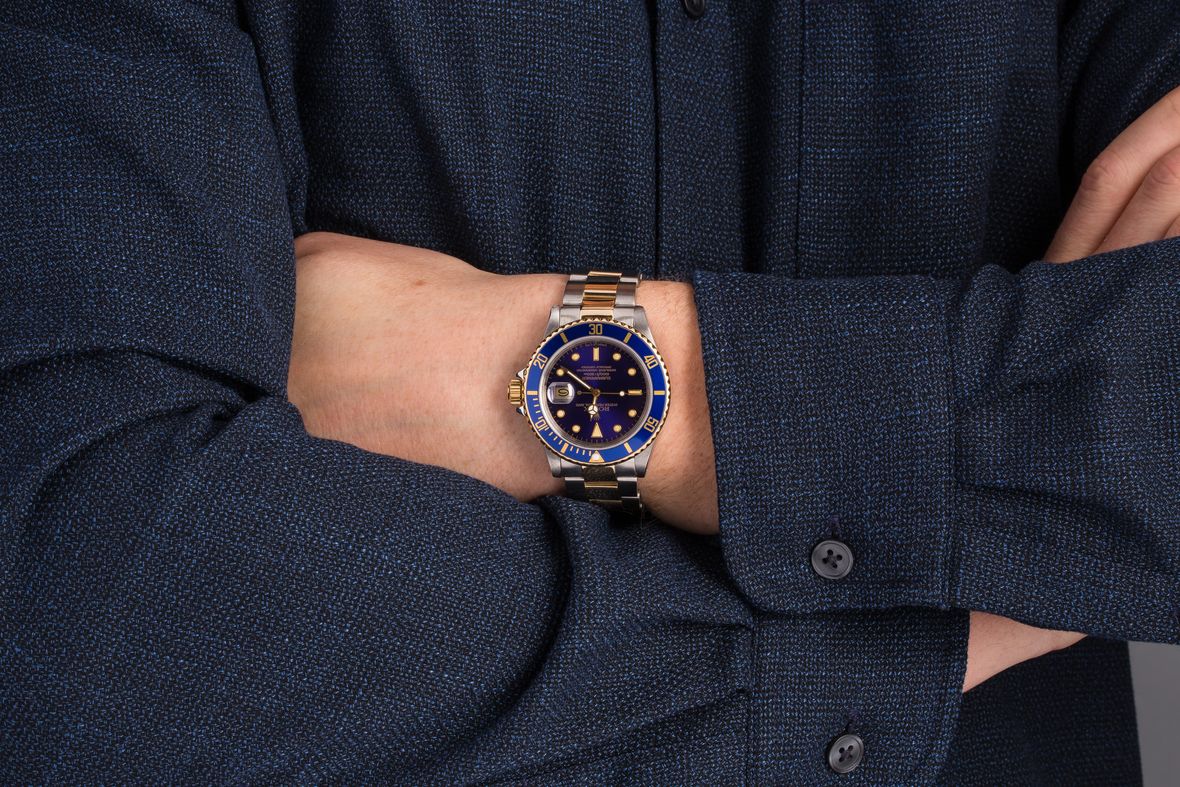 The 1980s was an especially fruitful decade for Rolex. While the ’50s may go down as its true golden age, the 80s was the era when the brand was forced to reinvent itself. With the proliferation of quartz technology, any chance mechanical watches had of competing in terms of price or accuracy were gone and so Rolex decided to go the other way entirely, carving out a new position as the ultimate purveyor of the luxurious lifestyle product.

That opened the gate for a slew of what were once tool watches being issued in all manners of precious metal finery, whether in solid gold or the half-and-half combination of Rolesor. The Submariner, having already been issued in a full yellow gold version for years, was clearly overdue for a two-tone model and the ref. 16803 was it.

The two-tone Submariner arrived five years after the other two pieces that made up the ref. 168xx range (the first generation of five-digit Submariner watches). Those models, the ref. 16800 (all-steel) and the ref. 16808 (18k yellow gold), came along in 1979 and brought with them a whole raft of upgrades over the previous generation, the ref. 1680. Arriving about half a decade later, all of those modernizations were also included with the ref. 16803, and we will take a closer look at each of them below. 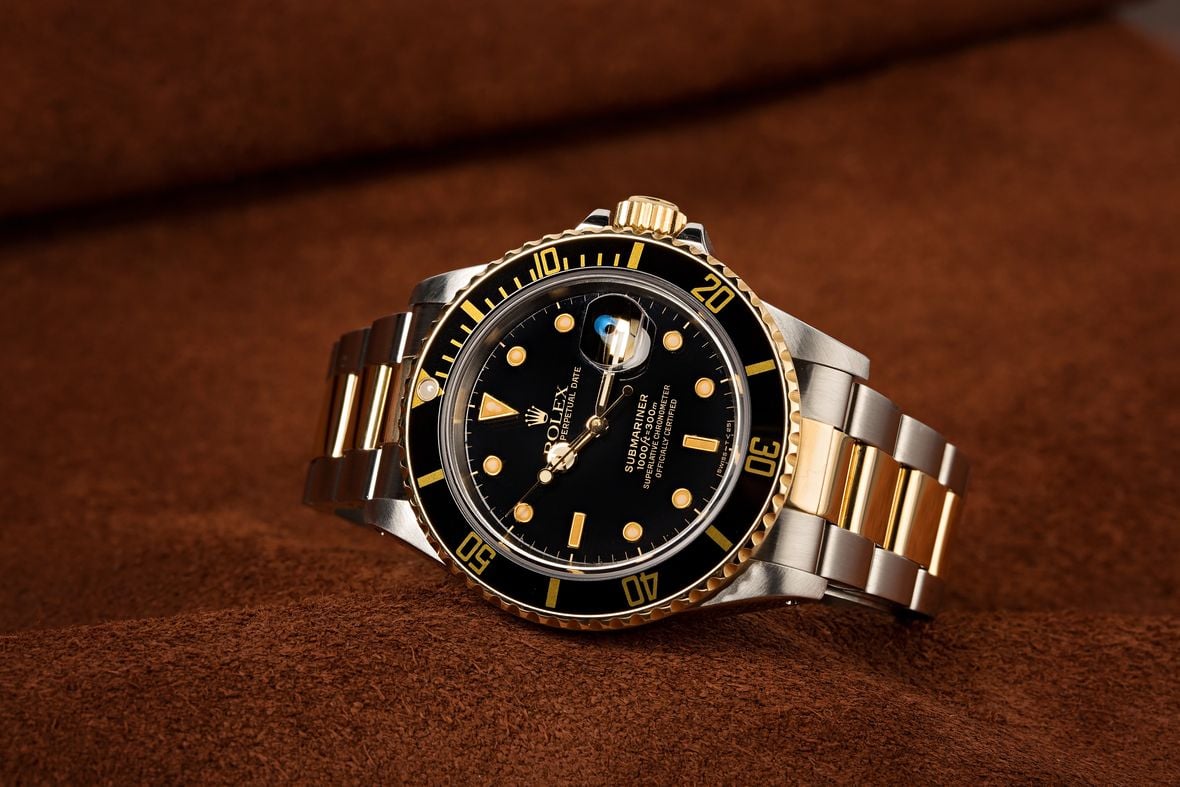 By the time the ref. 168xx series was unveiled, the Rolex Submariner had gone through more than a dozen different references, with their water-resistance varying between 100m and 200m. However, for the 1967 launch of the beefed-up, no-nonsense Sea-Dweller, Rolex had improved upon its own Twinlock winding crown system and had invented the Triplock.

This new screw-down crown system included an arrangement of O-ring gaskets inside that created three separate watertight zones instead of the previous two featured on the Twinlock, giving the new Triplock crown more robust protection. The ref. 168xx series was the first Submariner generation fitted with the new Triplock crown system along with being the first to feature sapphire crystals and therefore, they were the first Submariner references rated down to 300 meters.

Along with enabling a higher water-resistance rating, the decision to replace the former acrylic crystal with one crafted from synthetic sapphire also significantly increased the crystal’s scratch resistance. Ranking only slightly lower than diamonds on the Mohs mineral hardness scale, the clear synthetic sapphire used by Rolex is fantastically resilient. Although the Submariner’s time as a rough-and-ready tool watch may have ended and it was settling into its new role as an outright status symbol, these new Submariner watches were (rather ironically) the toughest ones yet. 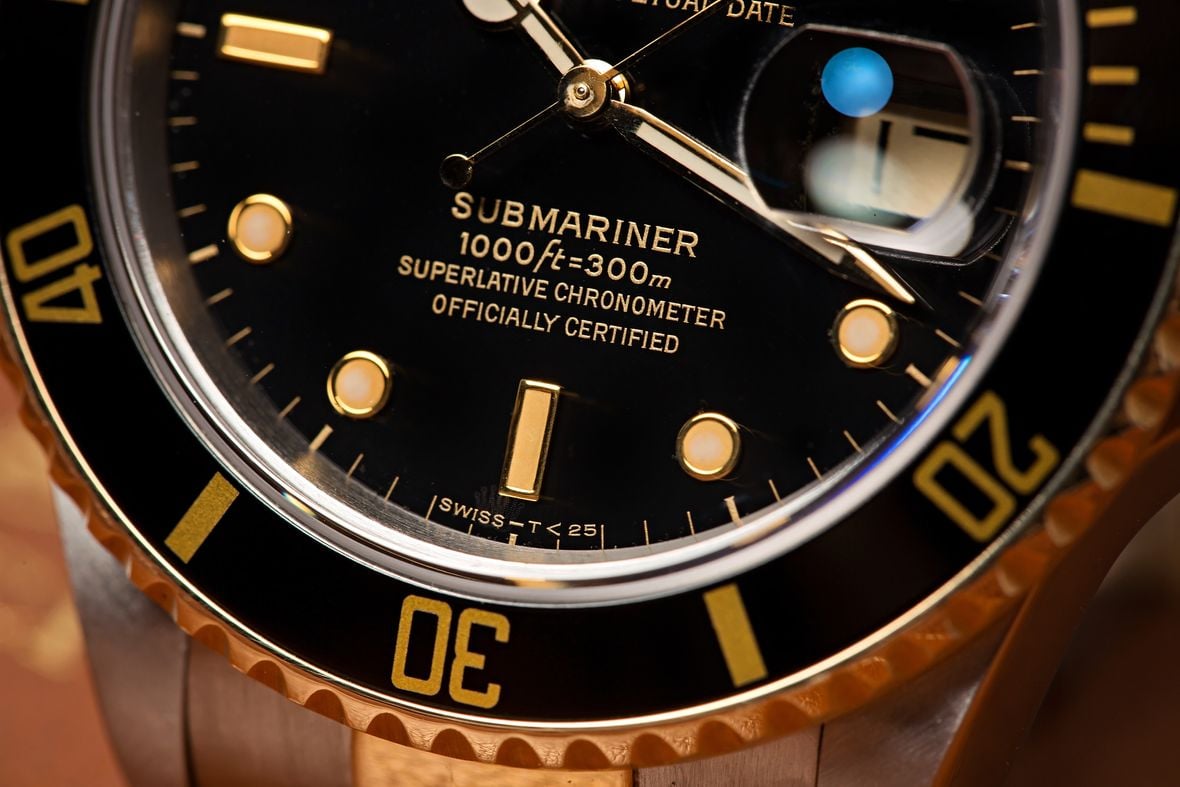 Yet another oddity in the short but eventful life of the ref. 168xx series is that Rolex actually made an extremely noteworthy alteration during its run, but with little fanfare. About two years after its initial release, the brand was finally able to issue the watch with a unidirectional bezel.

The patent for the innovation had been held by Blancpain, who had registered it with the advent of their Fifty Fathoms model in the 1950s. However, with the statute expiring in 1981, Rolex was free to adopt it for its dive watches too. Therefore, the ref. 168xx watches were the first Submariner models with unidirectional bezels.

Why is that such an important development? Well, a bezel that only rotates in one direction (specifically, counterclockwise) is one of the simplest yet most effective safeguards that any dive watch can have. A diver can turn the bezel so that the zero marker (at 12 o’clock) lines up with the minute hand. From here, it is merely a case of keeping track of the elapsed time underwater by reading it against the bezel’s 60-minute scale as the hand travels around the dial.

However, the danger comes should the bezel get accidentally knocked at some point. If it can move in a clockwise direction, there is always the chance the wearer could underestimate the real amount of time they have spent submerged and potentially skipping or mistiming a crucial decompression stop.

By the time the ref. 16803 was released in 1984, Rolex was already fitting all of its Submariner Date watches with unidirectional bezels, so all examples of the ref. 16803 are fitted with the updated style of bezel system. Additionally, as with the ref. 16808, the reference 16803 was available with either a blue or black bezel to match its dial. Being a Rolesor model, the inserts were made from anodized aluminum while the bezel ring itself was in 18k yellow gold. 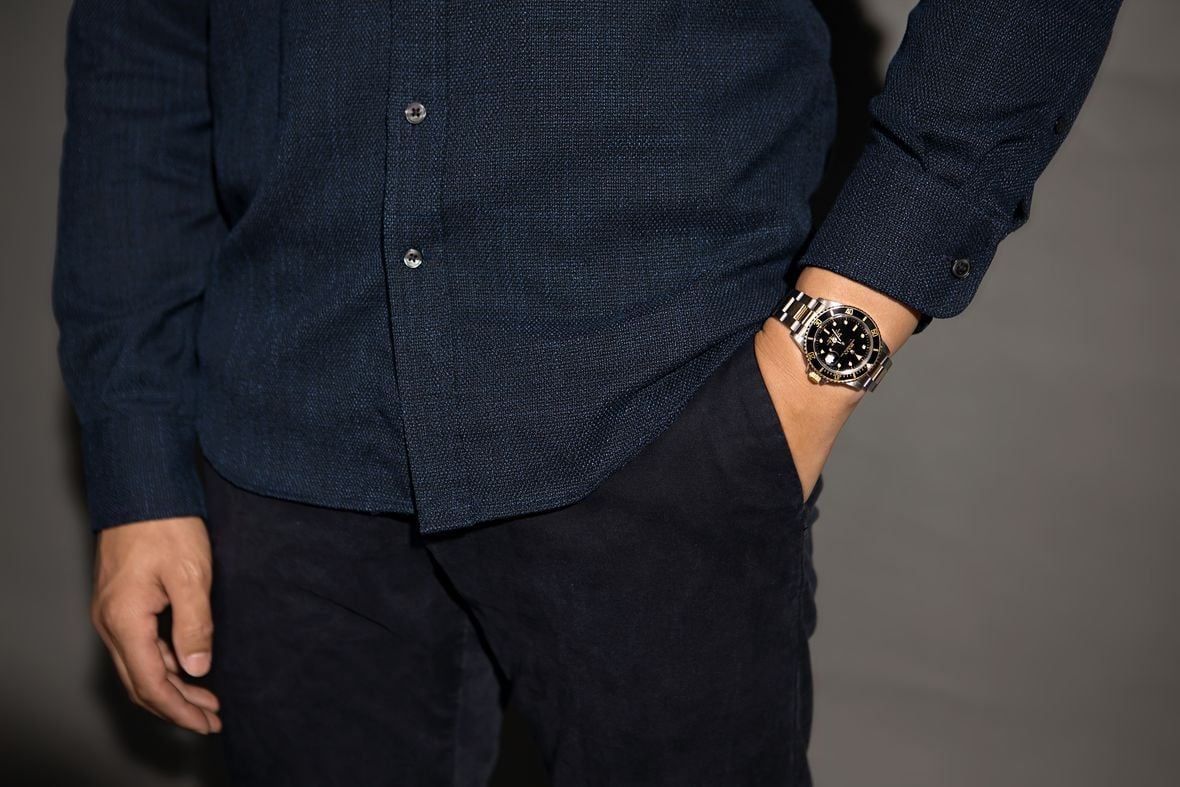 The full-gold and Rolesor Submariner models from the ref. 168xx generation could be had with a blue or black dial and bezel. However, each had different qualities. The black dials on the ref. 16803 were the standard glossy style with applied gold markers (Rolex started making the switch from matte dials just as the Rolesor Submariner debuted in the mid-1980s.

The blue dial, on the other hand, had a beautiful metallic sunburst finish and one that would go on to define subsequent generations of blue Submariner watches. The brushed texture, radiating out from the center, gives a dynamic appearance as its hue changes constantly in different lighting.

Additionally, there was another dial type as well, one no longer made by Rolex. The two-tone and solid gold examples from this generation could also be had with either champagne or slate-colored dials fitted with diamond and sapphire hour markers (known as a Serti dial).

The indexes on the standard pieces also changed throughout the ref. 16803’s brief production run. The so-called ‘nipple dials’ in the early days, consisting of small conical gold dots raised from the surface, gave way to the flat, lume-filled markers ringed in 18k gold that are still used by the brand today. 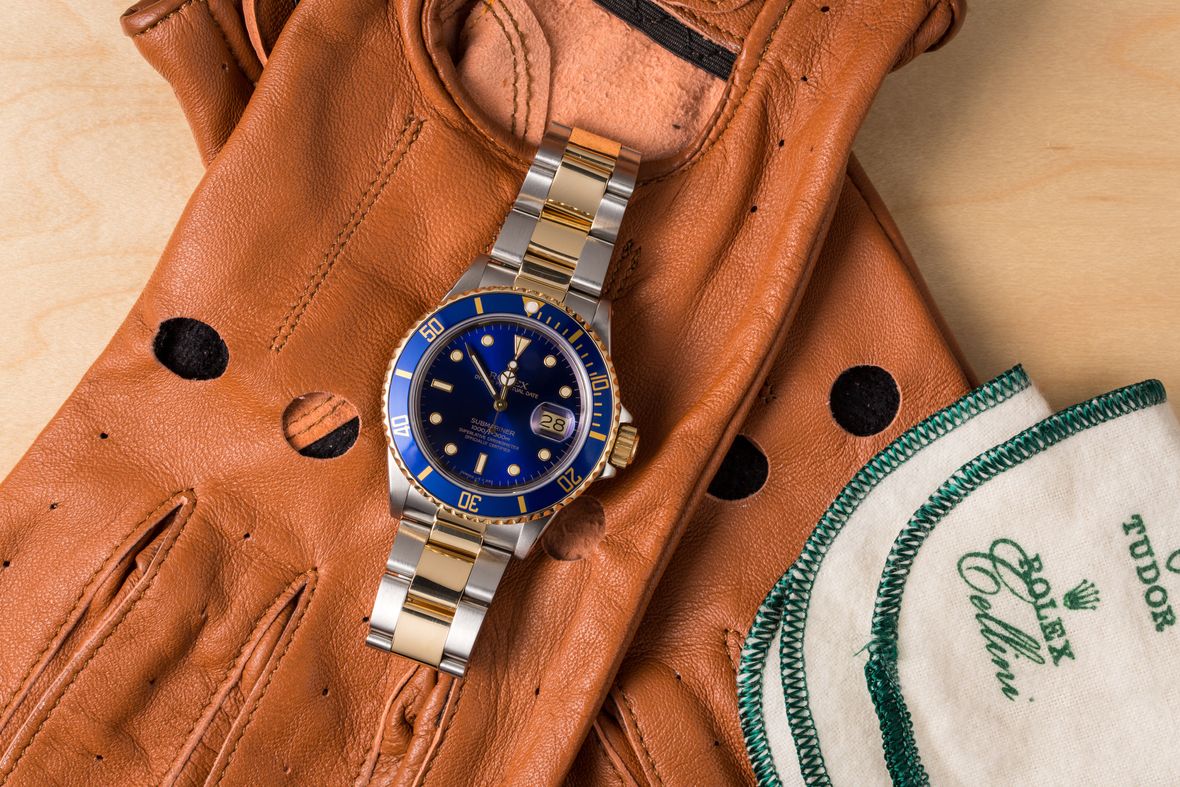 To finish up the exhaustive list of firsts for which we can thank the ref. 168xx Submariner series, we have to turn to its movement. The in-house manufactured Caliber 3035 had a similarly transitory contribution to the Rolex archives, but it too signified a significant milestone moment.

The Rolex Cal. 3035 was the first high-beat movement to power the Submariner, upping the balance speed from the 19,800vph of the outgoing Caliber 1575 of the previous generation to the now-standard 28,800vph of all modern Rolex watches. This is the frequency that grants the eight beats-per-second glide of the seconds hand that we have come to associate with the contemporary lineup, as well as increasing the mechanism’s stability and timekeeping accuracy.

The Cal. 3035 was also the movement to bring the Quickset date function to the range. Now, rather than having to spin the main hands through 24-hours to advance the date, the wearer could adjust it independently of the time-telling hands by simply pulling the winding crown out to a different setting position. 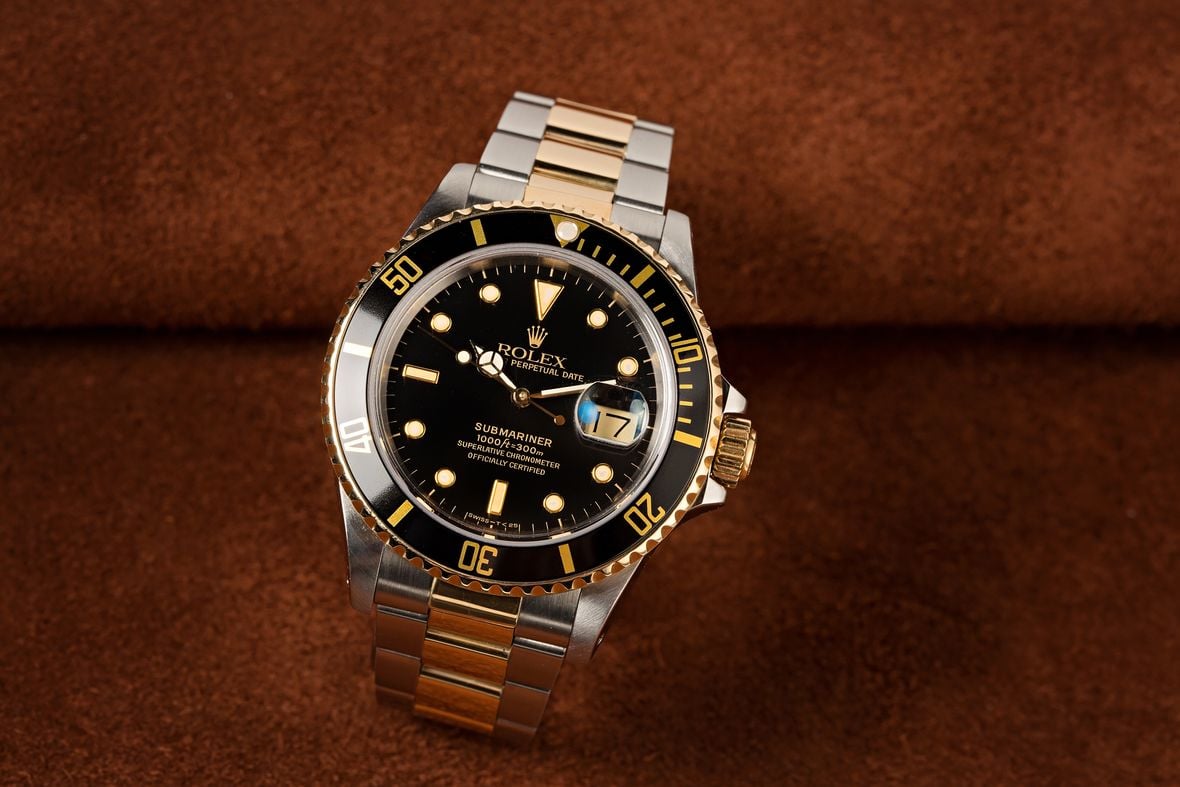 Much like the ref. 16803, the Caliber 3035 movement was also quickly superseded, in this case by the legendary Caliber 3135. There were far more similarities than differences between the two, the latter being seen as more an evolution and refinement rather than a radical overhaul. The later movement benefited from a full balance bridge, a larger balance wheel, and an increased power reserve but in terms of functionality, there was little to choose between them. Both movements are COSC-certified chronometers and will offer superb performance when properly maintained.

The ref. 16803 is an often overlooked member of the Submariner family. This is especially a strange fate for a watch that brought so many new things to such an iconic and popular collection. The Submariner 16803 represents the first Rolesor model, the first Triplock crown on a Submariner, the first 300-meter depth rating, the first sapphire crystal, the first unidirectional bezel, and the first high-beat movement with Quickset date functionality.

By rights, a Rolex watch with that much heritage should command insane prices on the pre-owned market – especially considering that it was only in production for about four years, making it a relatively scarce piece. However, that hasn’t happened (at least not yet). Prices for this undeniable slice of dive watch history start out at around $10,000, which is right around the same price as the absolute least-expensive Submariner watches available.

It is worth remembering that the words “Rolex Submariner” and “undervalued” are rarely seen together for very long. The Submariner is one of Rolex’s most famous and desirable models, and any hidden gems within the collection quickly get discovered. We are already witnessing the two-tone reference 16803 starting to rise in value, so if you wanted one, it would be best to add it to your collection sooner rather than later. 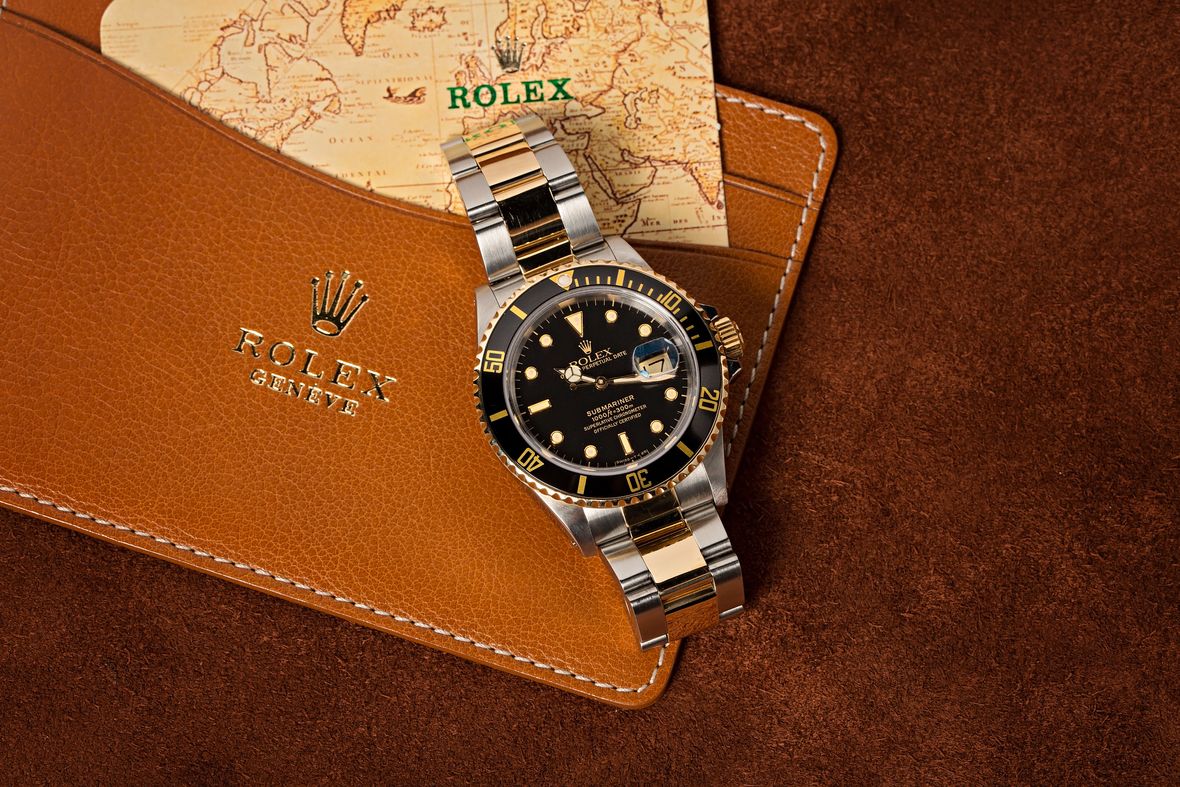