Vintage of The Week: One Red Hot Rolex Classic That Can’t Be Passed Up 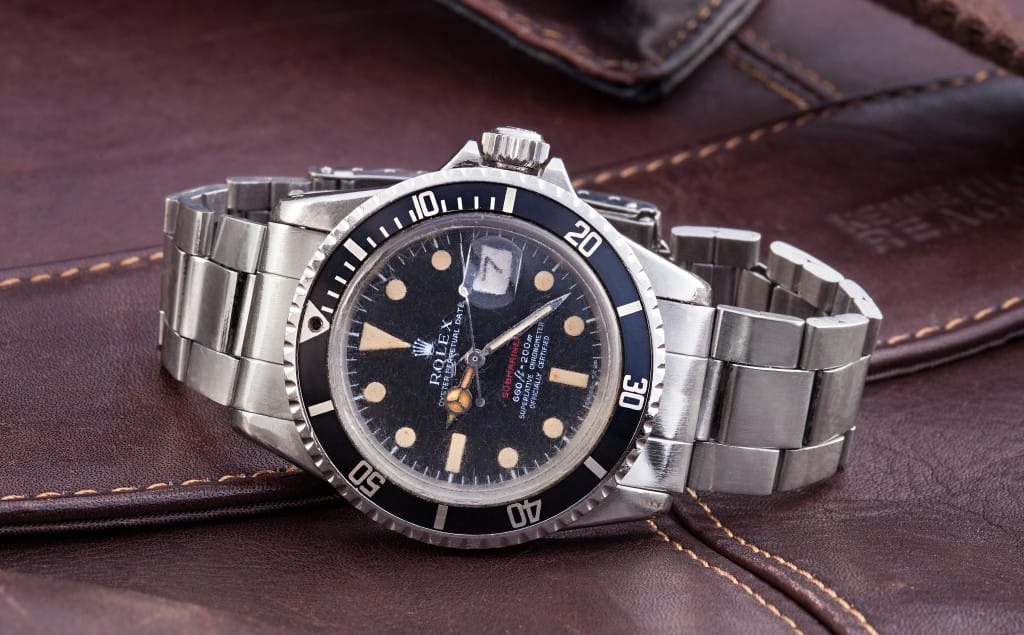 Though we’ve previously discussed the Rolex Oyster Perpetual Submariner, and many of its variations, there always seems to be another deviation about which we can wax poetic. As formerly noted in these pages, the Submariner was launched in 1954 and was the first wristwatch designed to include a diving depth of more than 330 feet, or 100 meters. (It now has a depth rating of 1,000 feet, or 300 meters.) Just one of the brand’s many classic models, the Submariner line includes 11 variants ranging in price from $5,000 to more than $234,000 for Steve McQueen’s Submariner from the auto-racing movie “Le Mans.” 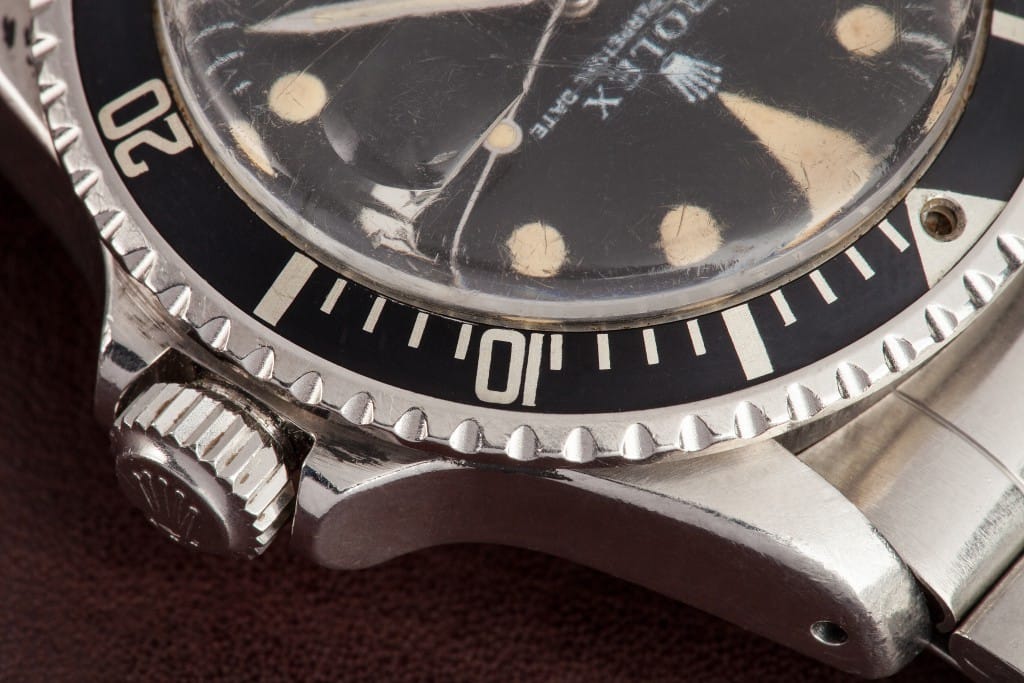 For this piece, we thought we’d take a look at a personal favorite, the Red Submariner, or Red Sub, Ref. No. 1680. While the ref. 1680 was in production for over three decades, the Submariner appeared with its name printed in red for just the first five to six years, beginning in 1965. Then, in the early ‘70s, Rolex changed the type to white. Finding one of these specimens is rare; were a Red Submariner to go in for repairs (as diving watches need to be re-pressurized when batteries are replaced), means that the Swiss watchmaker would have switched out the face with the rare red type for new faces which hosted a white font.

Years of research reveal that the earliest Red Subs are made with 2.1xx.xxx serial numbers, while early ‘69 models include a caseback stamp. These “Meter First” versions (where the depth rating is listed in meters before feet) include one that was built with a black face that eventually faded to brown. 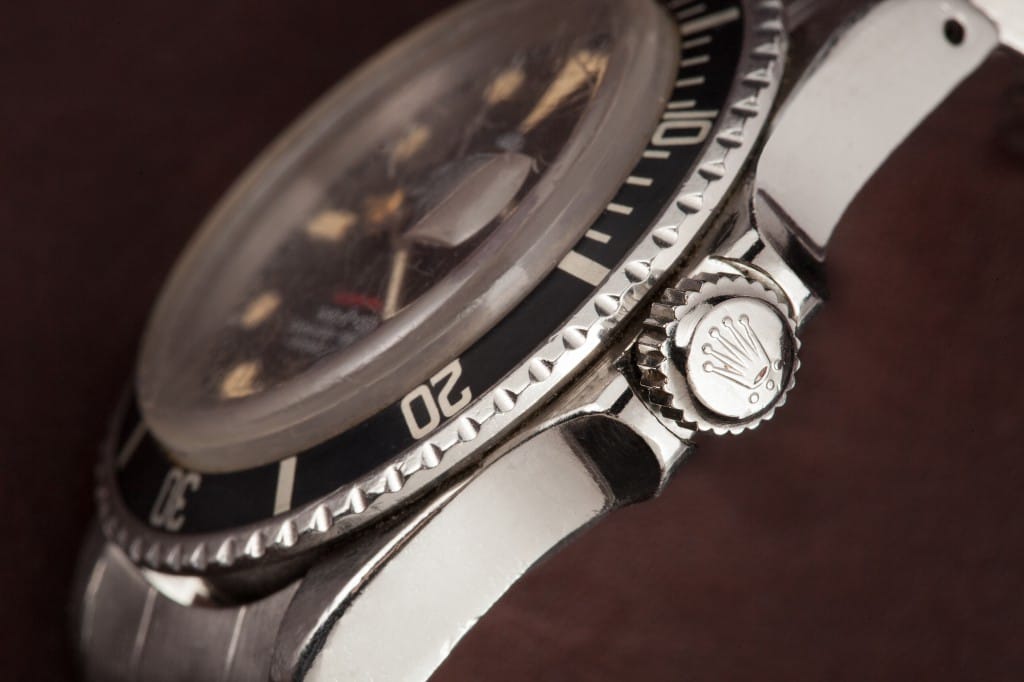 Along with this particular series, Rolex introduced the movement caliber 1565. A few years later in 1971, the watch company engineered the Sub’s caliber to include hacking: When setting the time, the seconds hand stops when the crown is pulled out. This new-and-improved caliber also helped usher in the chronometer status. One of the first Submariners to incorporate a date function (though the Rolex GMT Master, Ref. No. 6542, wins the honor of being the first), the 1680 included a Cyclops date magnifier. Many regard this Submariner lineup as the time when Rolex made the move from being seen as a serious diving watch to becoming the luxury accessory that everyone desired. 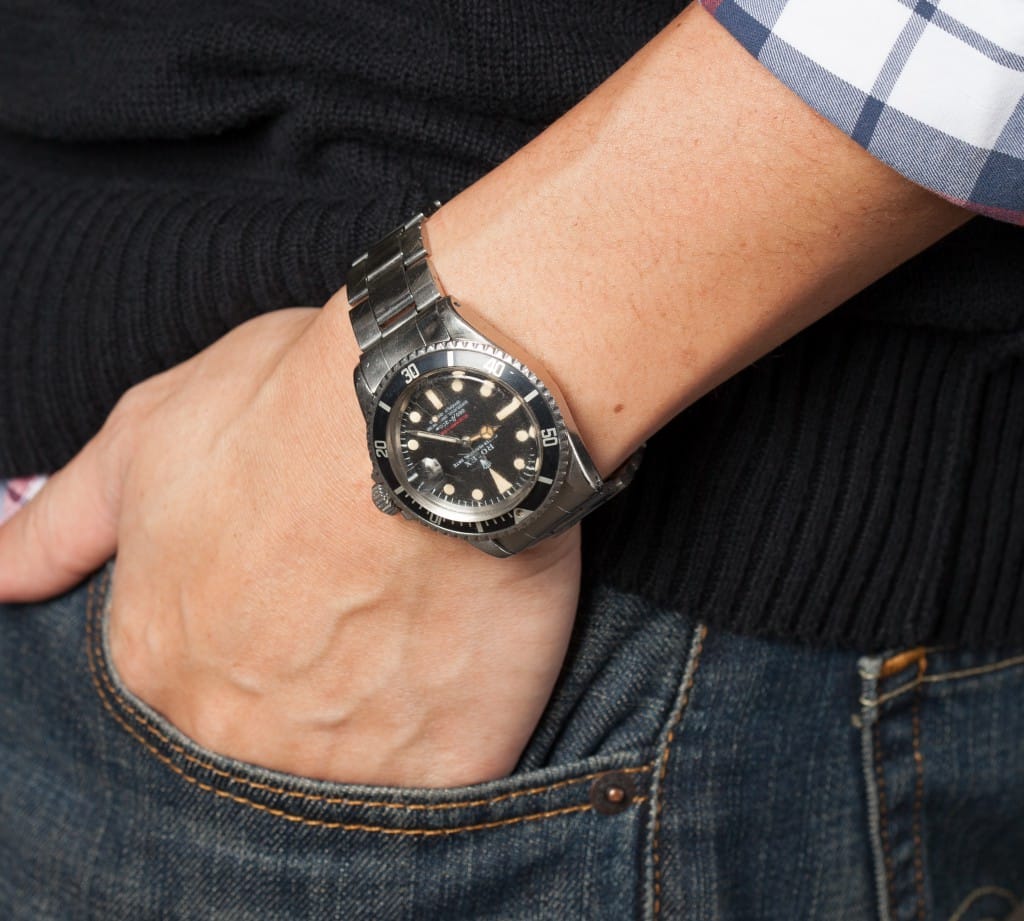 The Vintage Red Submariner will look good on any wrist.

If lucky enough to come upon one of these rare Red Subs with a rich history, you’ll also notice its bi-directional bezel, matt dial mated with tritium luminous material directly applied to the surface, as well as a thick synthetic plastic crystal and chronometer-rated movement.