About the Rolex Pepsi

While Rolex has paired the GMT-Master watch with various bezel colors over the decades, none are as iconic as the blue and red colorway nicknamed the "Pepsi." From the inaugural model that made its debut in 1955 to the current collection, there have been numerous GMT-Master Pepsi references made throughout the history of Rolex's signature pilot's watch.

Rolex launched the GMT-Master in 1955 as a tool watch for Pan Am pilots to keep track of two time zones simultaneously. The first is local time, displayed via the traditional hour hand on the dial. The second is reference time, which during that era was Greenwich Mean Time (GMT), displayed via a 24-hour hand pointing to a 24-hour marked rotating bezel.

The first reference was the GMT-Master ref. 6542, which included a blue and red Bakelite bezel on top of the stainless steel case. Aside from giving the watch a striking style, Rolex selected that particular color combination to help pilots easily differentiate between day (red) and night (blue) hours in the second time zone.

While Rolex replaced the Bakelite material of the first reference with aluminum bezels on the succeeding GMT-Master ref. 1675 watches, the brand retained half red and half blue coloring. In fact, there has been a GMT-Master Pepsi bezel available with almost every generation of the GMT-Master and GMT-Master II, mostly on stainless steel models and in more recent years, on white gold models too. There was a seven-year period when Rolex temporarily stopped making the blue and red GMT bezel an option, but thankfully, it has returned to the catalog. The only steel versions that Rolex did not make with a Pepsi bezel are the GMT-Master II ref. 16760 and the GMT-Master II ref. 116710.

Rolex has made a total of eight GMT-Master Pepsi references over the last six-plus decades. Half of them belong to the original GMT-Master lineup (with synced hour hands) while the others are part of the GMT-Master II collection (with decoupled hour hands.)

Furthermore, depending on the model, the red/blue bezels have been made from Bakelite, aluminum, and Cerachrom ceramic. The letters "BLRO" in the reference number denote the presence of the Pepsi bezel as they stand for the French words "bleu" and "rouge," which translates to "blue" and "red."

Below is an overview of the similarities and differences between the various generations of GMT-Master Pepsi watches.

There are only two GMT-Master II Pepsi watches that can be purchased new from authorized dealers: the steel GMT-Master II 126710BLRO and the white gold GMT-Master II 126719BLRO, which retail for $9,700 and $38,250, respectively. Yet, actually getting your hands on one from an AD requires an incredible amount of patience (years-long) given the lack of availability of these coveted Rolex watches.

On the other hand, the secondary market offers the entire GMT-Master Pepsi lineup including vintage versions, discontinued references, and current-production models.

With its iconic blue and red bezel, the GMT-Master Pepsi has long been one of Rolex's most popular sports watch models. As a result, prices in the secondary market reflect that popularity. For instance, the latest steel GMT-Master Pepsi is currently valued more than double its MSRP with prices starting at $19,950 for pre-owned GMT-Master II 126710BLRO watches. Even the white gold version is selling above retail, starting at $42,995 for pre-owned GMT-Master II 126719BLRO models.

Similarly, older GMT-Master Pepsi models are considered exceedingly collectible, therefore are valued higher than the retail price of a brand new GMT-Master Pepsi. Expect to pay more than $12,000 for the least expensive Pepsi GMT-Master reference. On the other end of the price range, it is not uncommon for the ultra-rare and sought-after original GMT-Master Pepsi ref. 6542 to sell for six-figures. 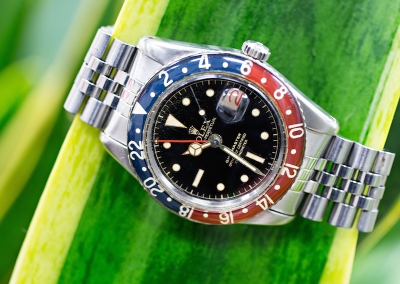 Many collectors find the half red, half blue bezel insert from a "Pepsi GMT" to be reminiscent of the logo of the internationally famous soda manufacturer. Although the GMT-Master's red and blue color scheme actually has its origins in the company colors of Pan Am Airlines, the red and blue version of Rolex's multi-time zone pilots' watch has become inspirable from the Pepsi-Cola Corporation. If you would like to browse additional watches be sure to visit our used Rolex GMT watches for sale.

Unique Features for the Rolex Pepsi

A half red, half blue, 24-hour bezel insert with silver text - made from Bakelite, aluminum, or Cerachrom (depending on the year of production).