The Rolex Submariner family is one of the most popular among the brand's line up of watches and the now discontinued 16610 still remains a favorite within the diver's watch collection. The Rolex Submariner 16610 is a class watch someone thinks of when someone says "Submariner". Browse the other models by visiting our full selection of pre owned Rolex watches.

The Rolex Submariner family is one of the most popular among the brand's line up of watches and the now discontinued 16610 still remains a favorite within the diver's watch collection. Continue reading to discover why this model continues to be a popular choice among the collection.

In recent times, Rolex's most successful line of watches is the Rolex Submariner collection. First introduced in 1954, the Submariner quickly gained popularity for its robust construction, timeless design, and superior water resistance. The original Submariner was introduced by Rolex in 1953 as the first diving watch that could safely reach a depth of 330 feet, and quickly became the quintessential tool watch for under water explorers. Over the years, several design and technical modifications have been made to the Submariner and the ref. 16610 was in production from the late 1980s until 2010, where it was eventually replaced by the present ref. 116610. In 2003, the Rolex 16610LV, with a distinct green bezel and "maxi" dial, was unveiled to celebrate the 50th anniversary of the Submariner collection. This particular model is now affectionately known as the "Kermit". 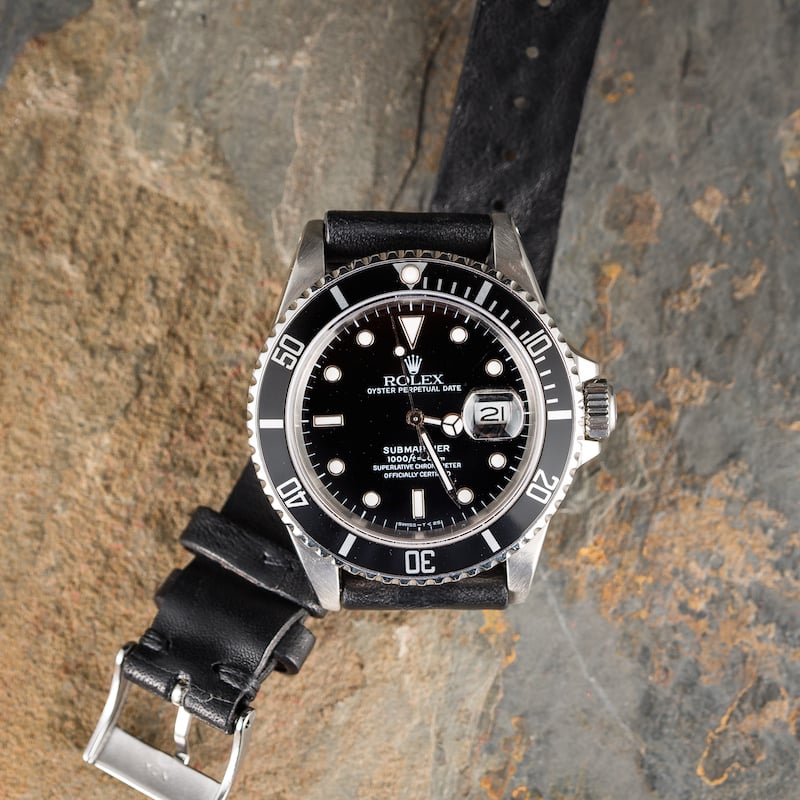 While vintage Submariners get much of the attention these days, and certain rare variants have attained legendary levels of value and collectability; there are plenty of other past Submariner references that excel in cost/ease of ownership and the ability to withstand the wear and tear of daily use.

Throughout its nearly quarter-century-long production run, the reference 16610 did undergo a few minor changes as Rolex continued to refine and update the design of their date-displaying dive watch. As the changes were minor, Rolex did not issue the watch a new reference number; however, these subtle updates do help serve as indicators of when a specific reference 16610 was manufactured.

Some of the changes to take place throughout the reference 16610's production run are the switch from tritium to LumiNova, the elimination of drilled lugs, and the appearance of the serial number and "Rolex" engraving on the inner bezel. As all these updates were minor, they did not warrant a revised reference number; however, they still give prospective buyers some slight variations and minor options to select between when purchasing one of these Submariners in the pre-owned market.

To many, the Rolex 16610 Submariner is the first watch that comes to mind when they think of Rolex's legendary dive-oriented sports watch. Although it is not as rare or unique as some of Rolex's vintage Submariners, the reference 16610 makes a fantastic and highly practical watch for everyday use, as it contains many of Rolex's latest and greatest advancements, and replacement parts are readily available.

In terms of functionality as dive gear, the 16610 is waterproof to a depth of 1,000 feet and features a unidirectional rotatable bezel with an aluminum insert marked with graduations to allow for timing of immersion and decompression periods. It's also equipped with a screw-down crown and Triplock system to ensure its waterproofness.

Aside from its technical capabilities, the Submariner's popularity can be attributed to its great looks. Its 40mm stainless steel Oyster case, black dial, "Mercedes" hands, luminescent hour-markers, come together to form the watch's iconic look.

The Submariner 16610 is equipped with a date function - the no date Subs have different references numbers - with its date window at 3 o'clock magnified by the famous Rolex Cyclops lens. Some versions of the 16610 case sides have holes through the lugs to facilitate interchanging straps, while later models made after 2003, no long have them.

The stainless steel case and bracelet, along with the black dial and black bezel with white markings is a design that is so appealing that it has made the Rolex Submariner the most popular luxury diver's watch of its generation. Similar in many respects, yet fundamentally different where it matters, choosing between the style of the more mature model and the younger one is a matter of personal taste. Although on paper the two siblings are quoted as being the same size at 40mm, in reality, it's not the case. Thanks to its smaller crown guards and slimmer lugs, it's not as bulky on the wrist, and thus more graceful and classic than its sportier counterpart. It can also be argued that the dial, with its smaller indexes and hands, is a more refined approach than the contemporary "Maxi" dial. If you lean towards a more elegant aesthetic, even when looking at sports watches, then the 16610 would be a solid choice.

From 2003 onwards, Rolex took away the holes in the lugs that would allow for easy bracelet and strap switching. So watches dated prior to that year, such as this particular ref. 16610 circa 1989/1990, can sport a diverse range of straps and bracelets for a simple way to change up the watch’s character. The black Italian leather strap seen here on the Submariner is a cool change of pace from the traditional stainless steel bracelet.

Naturally the older model of the Submariner will have a lower upfront expense than the newer version. In the secondary market of luxury watches, a Submariner 16610 can be picked up for approximately $4,500 – $5,500, while the 116610 sits around the $7,000 mark. But another consideration to keep in mind is the cost of replacing the bezel. Replacing the aluminum bezel insert of the 16610 is significantly more affordable than what it would cost to purchase a ceramic bezel on the more modern models.

A Submariner 16610 in good solid working condition can range in price. And here at Bob's Watches we carry a strong inventory of Rolex 16610 for sale at a very attractive price point.

The present day version of the steel Submariner-Date is the 116610 and one of the big differences to the preceding 16610 include the use of the Cerachrom bezel insert - a scratch and fade proof ceramic for an even more robust timepiece. Another notable change is the doubling of the width of the crown and lugs, making the newer model seem larger, although it still has a 40mm case. Current Submariner watches are also available in white and yellow gold, as well as two-tone versions.