After more than a year of digital meetups and postponed events, certain parts of the world are finally starting to get back to in-person gatherings and the 93rd Academy Awards ceremony took place last night as a live event unlike any other. Due to safety precautions, the event was held in multiple locations but just as you would expect from any gathering of Hollywood’s hottest A-list celebrities, a number of remarkable luxury watches could be spotted on the wrists of those in attendance.

In addition to returning to a live in-person format, the organizers of this year’s Oscars ceremony were adamant that the awards show uphold the refind and glamorous mood of the traditional Oscars, and guests were encouraged to wear formal clothing that was described as “a fusion of inspirational and aspirational” in a letter sent by the producers. Given these dress code guidelines, you can guarantee that some truly exceptional timepieces were at the event, and below is a closer look at a few of our favorite standouts.

Click here for a closer look at 7 iconic luxury watches that every collector should know. 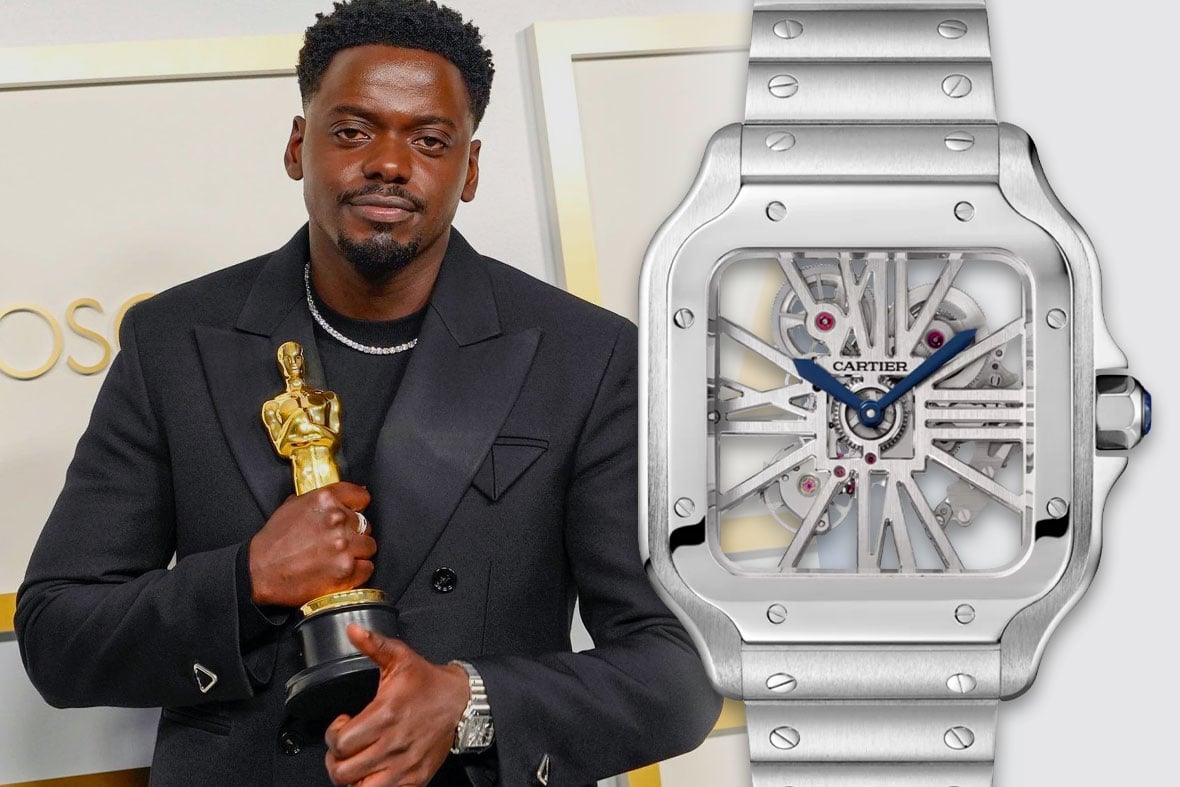 Daniel Kaluuya took home the Oscar for Best Supporting Actor for his role in Judas and the Black Messiah and throughout the evening, those watching at home could spot a very special timepiece on his wrist. While a decent number of the attendees present at the 93rd Academy Awards opted for luxury watches paired with leather straps, it was the distinct case lines and bracelet of the Cartier Santos that could be seen peeking out from Daniel Kaluuya’s sleeve as he accepted his award.

The Cartier Santos is one of the world’s oldest watch designs with a history that dates all the way back to 1904. Its core design is truly iconic, but the particular version worn by Daniel Kaluuya was the Santos de Cartier Skeleton, which offers a fresh and thoroughly modern take on one of Cartier’s signature aesthetics. Featuring a case and bracelet crafted entirely from stainless steel, the focal point of this watch is its fully skeletonized in-house movement, which has been cut away so that the shapes of the bridges resemble the oversized Roman Numeral hour markers that are traditionally found on the dial of Cartier Santos watches. With a current official retail price of approximately $27,800, the Santos de Cartier Skeleton is certainly one of the more premium renditions of this historic model, but we think it was the perfect choice for Kaluuya and arguably the most noteworthy watch spotted at last night’s show. 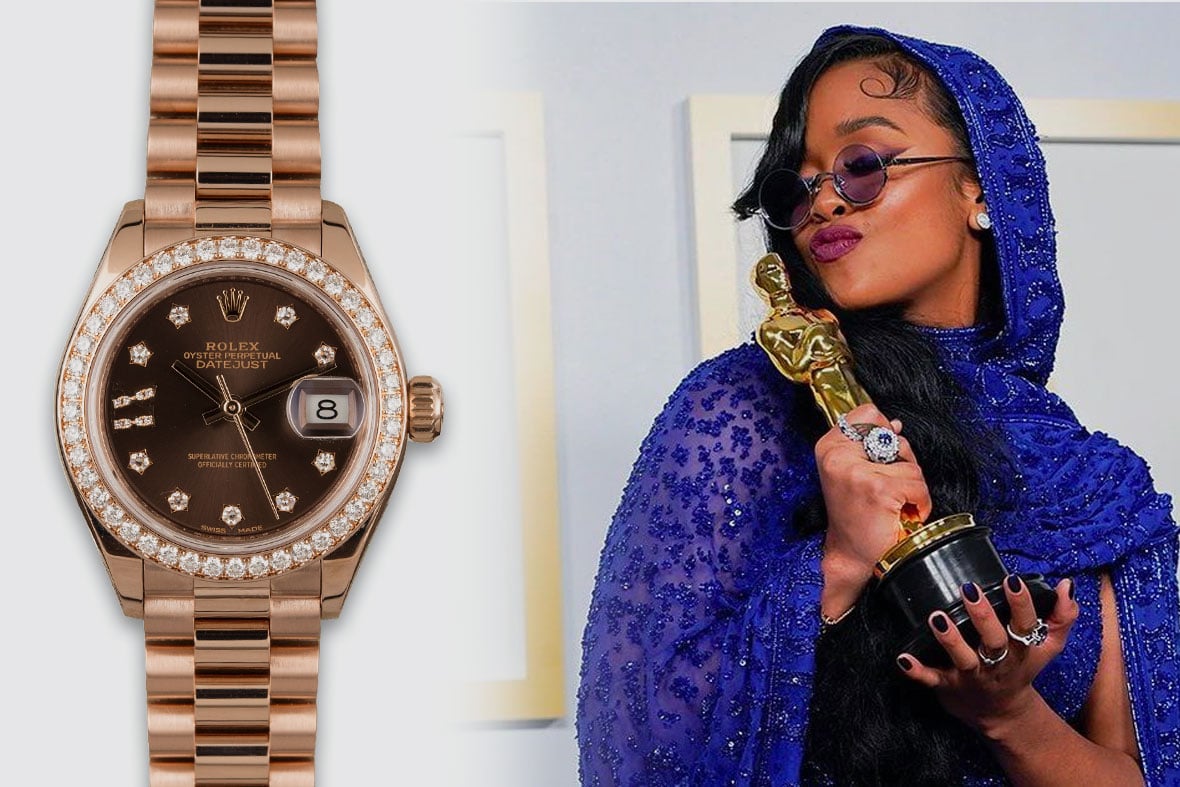 Another Academy Award winner of the evening who was spotted wearing a stunning luxury timepiece was American singer-songwriter H.E.R. who took home the Oscar for Best Original Song for “Fight for You” from Judas and the Black Messiah. Throughout the evening, H.E.R. was seen wearing a Rolex Lady-Datejust President, and this is not the first time the Grammy-winning artist has been seen wearing this watch.

Earlier this year when she added two more Grammys to her collection of awards, H.E.R. was wearing the same Lady-President and the watch can be seen on her wrist during countless concerts and interviews from the last couple of years. Consequently, this watch seems like it is definitely part of her personal collection rather than one provided by a stylist specifically for the event. Crafted from solid 18k Everose gold and fitted with a brilliant diamond bezel and President bracelet, H.E.R.’s Rolex seems to be her go-to timepiece, and we wouldn’t be surprised if we continued to spot it at both future awards shows and live performances. 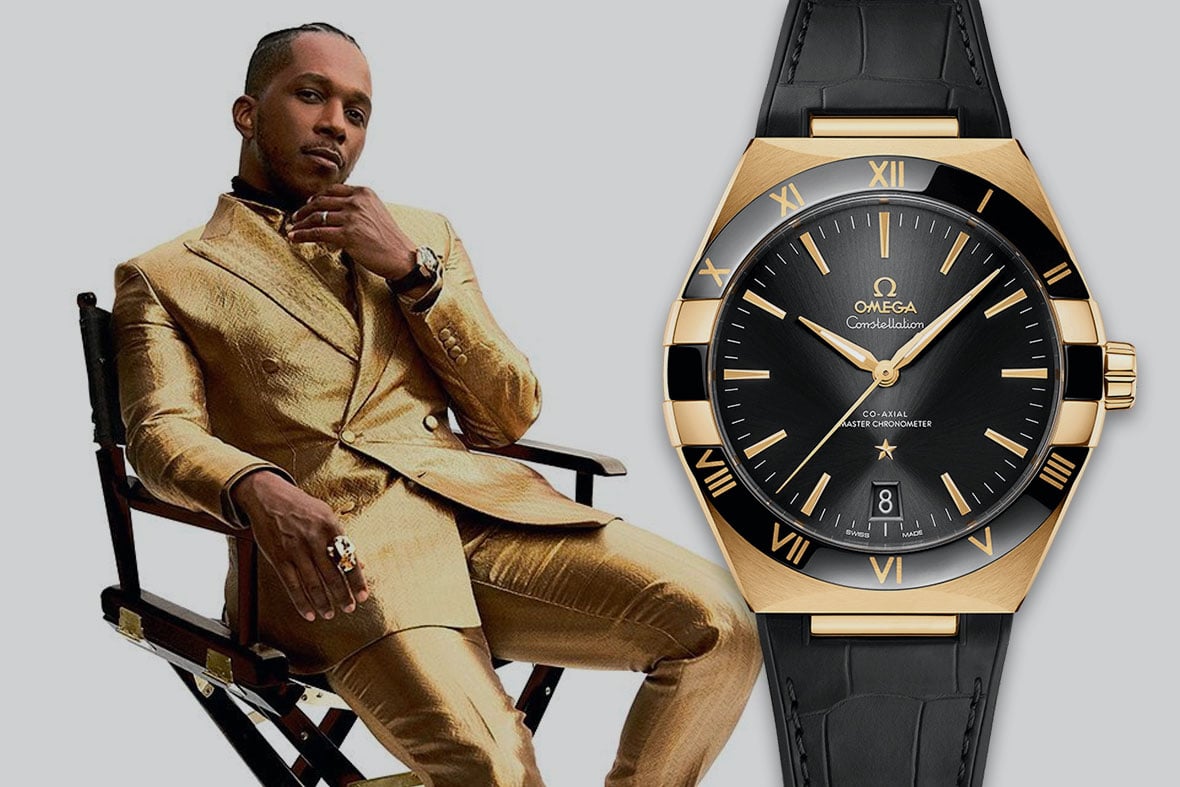 Nominated both for Best Actor in a Supporting Role and Best Original Song for “Speak Now” from One Night in Miami…, Leslie Odom Jr. was wearing one of the most noteworthy outfits from this year’s Oscars – and as you might expect, he had the luxury watch to match. Dressed in an entirely metallic gold suit (woven from silk threads dipped in gold), Leslie Odom Jr. completed his ensemble with a matching yellow gold Omega Constellation.

The specific Constellation model spotted on Leslie Odom Jr.’s wrist during the event was the new 41mm edition fitted with a black ceramic bezel and matching leather strap. The overall aesthetics of the watch are very much in-line with the core design of the original Constellation Manhattan model that debuted during the 1980s. However, its use of black ceramic paired with the updated font for the Roman numerals on its bezels creates a thoroughly modern take on this iconic Omega design – and one that perfectly paired with Leslie Odom Jr.’s striking golden suit. 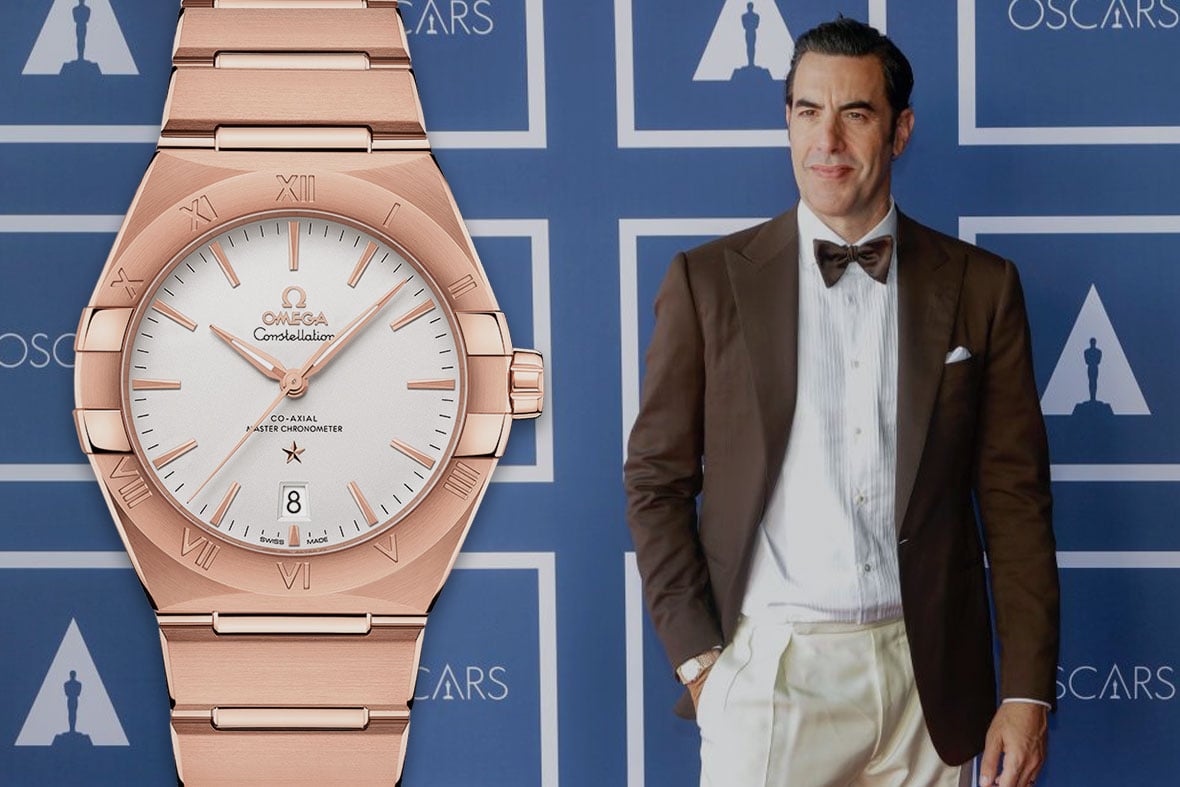 Another double-nominee that could be spotted wearing an Omega Constellation at the 93rd Academy Awards ceremony was Sacha Baron Cohen, who was nominated for Best Actor in a Supporting Role for The Trial of the Chicago 7 and for Best Adapted Screenplay for Borat Subsequent Moviefilm. This is not the first time that Sacha Baron Cohen has been seen wearing Omega watches at various awards shows, and the actor-filmmaker was seen wearing a Speedmaster Moonwatch at the Golden Globes and a De Ville Trésor at the Screen Actors Guild Awards earlier this year.

For this year’s Oscars ceremony, Sacha Baron Cohen opted for a 39mm Omega Constellation in full 18k Sedna red gold. Due to ongoing travel restrictions, Sacha Baron Cohen was unable to attend the live event in Los Angeles and instead appeared via video call from an in-person event in Sidney, Australia. Despite only making a digital appearance, the unmistakable case lines of the Omega Constellation were immediately identifiable on Cohen’s wrist, and his particular Sedna gold example was fitted with a crisp white dial that perfectly complimented his white shirt and trousers. 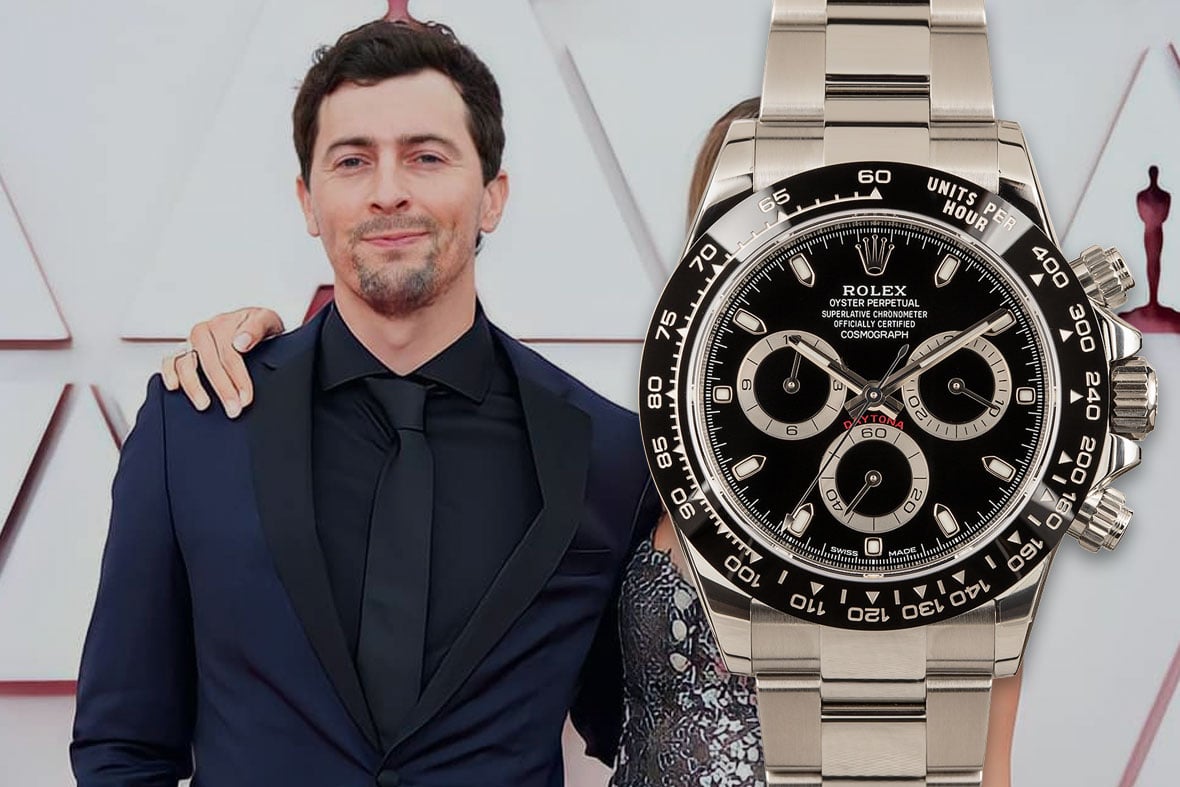 Rolex is a major supporter of the Academy Awards and given the brand’s status as the single most famous luxury watch manufacturer in the world, it is only natural to spot at least a few Rolex watches at the Oscars. While this year’s Rolex sightings were far more limited than in the past, there were still a number of timepieces from the brand that could be spotted at the event, including the Rolex Daytona ref. 116500LN that could be seen on the wrist of producer Josey McNamara, whose film Promising Young Woman was nominated for Best Original Screenplay.

While Josey McNamara’s Rolex Daytona was hidden from view most of the evening, those watching the pre-show got an excellent view of it while the producer was being interviewed alongside co-producer Margot Robbie. Launched at Baselworld 2016, the current stainless steel Rolex Daytona has been sold-out at retailers ever since. While the stainless steel Daytona retails for just $13,150, the incredibly limited supply and the multi-year waiting lists for the watch have pushed its value up to well over $30k on the open market. The example spotted on McNamara’s wrist during the Oscars pre-show was the version fitted with the black dial, which perfectly complemented his all-black suit and tie.