It is no secret that many Rolex watches perform extremely well as financial assets. You only have to look at prices on the pre-owned market for the most in-demand models to see how strong an investment a Rolex can make if you choose the right one at the right time. Of course, the trick is being able to spot which piece is going to increase in value in the future, and this is a long way from being an exact science. However, there are a few specific traits that can be indicators of investment potential and the Rolex GMT-Master II ref. 116710LN possesses several of them.

First, it is an example of the world’s most famous luxury travel watch, a piece that has truly become iconic during its 60+ year history. Second, the reference 116710LN has been discontinued, meaning that there are a limited number of examples in existence, which is something that is almost certain to drive up prices. And third, this particular model has a special place in Rolex’s history as the first stainless steel GMT watch to be fitted with the brand’s proprietary Cerachrom ceramic bezel and also the last to feature a single color bezel insert.

All told, there are plenty of points in favor of the Rolex GMT-Master II 116710LN becoming a future classic. So, to help you decide whether or not this particular model belongs in your collection, we have put together this guide to tell you everything that you need to know about this unusual and important Rolex reference. 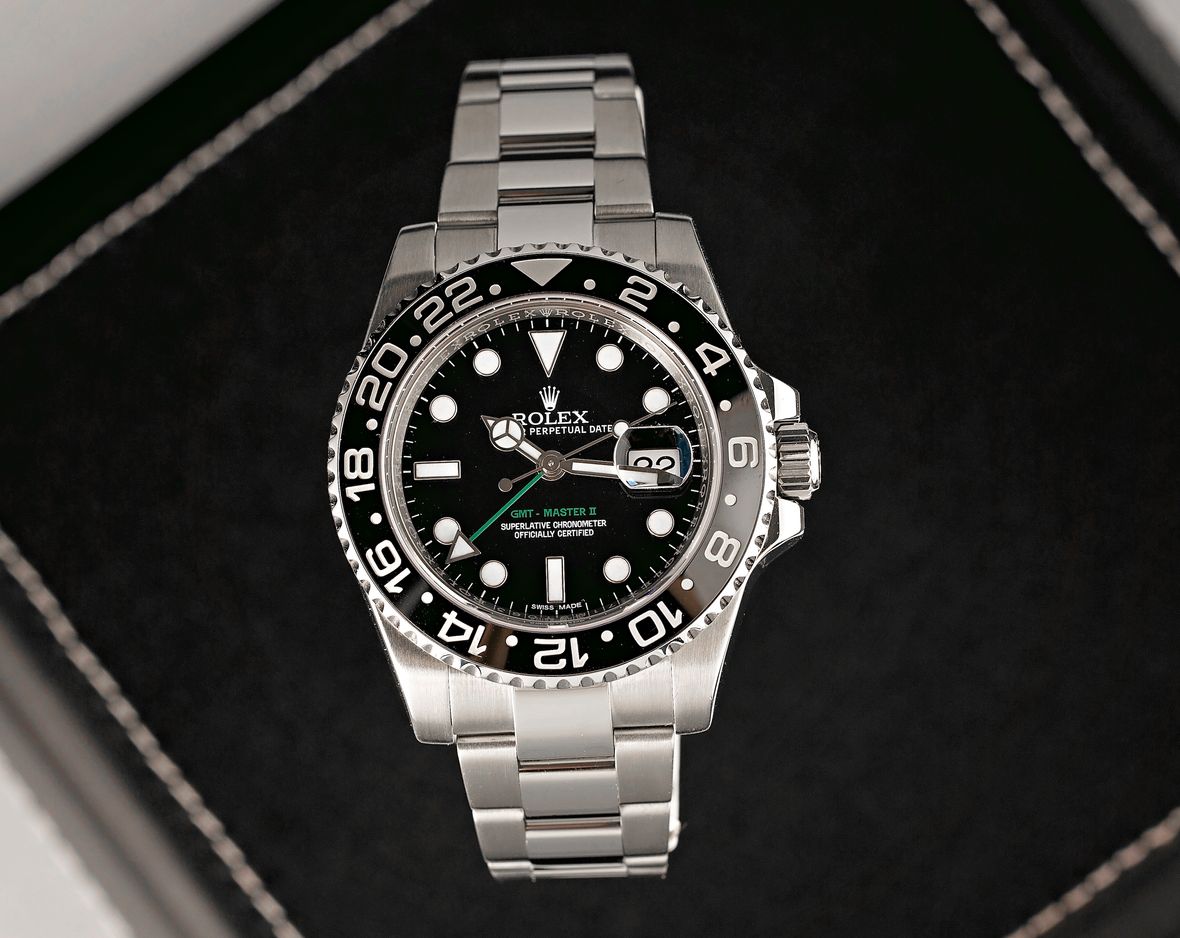 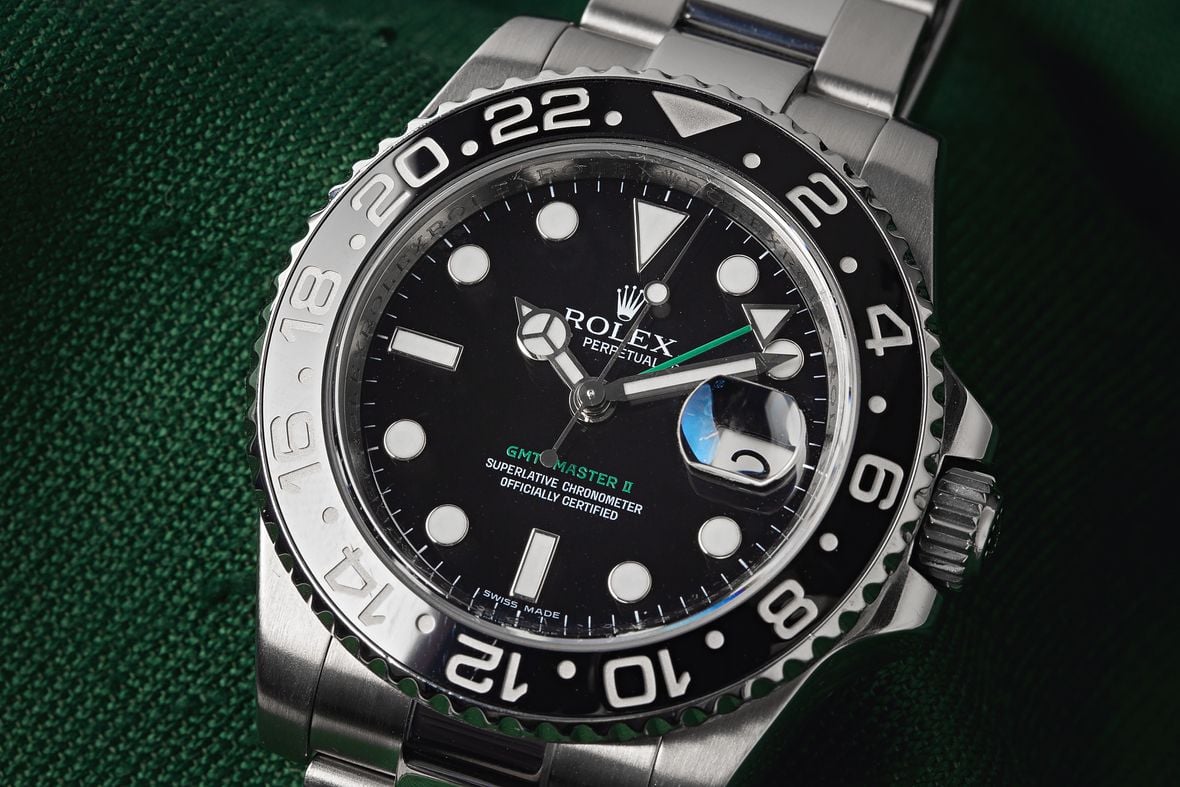 The ref. 116710LN wasn’t actually the very first example of the new six-digit generation of Rolex GMT-Master II watches. That honor went to the ref. 116718LN from 2005, which was constructed from solid 18k yellow gold and offered with either a black or celebratory green dial to commemorate the GMT-Master collection’s 50th anniversary. The solid gold model was followed by the two-tone Rolesor ref. 116713LN in 2006, and the stainless steel ref. 116710LN appeared the following year in 2007.

However, the steel model was the one that everyone had been waiting for and it arrived at Baselworld 2007 sporting Rolex’s recently introduced Super Case (the GMT-Master II range was the first to feature it). Although it maintained the same time-honored 40mm case diameter as its predecessor, the overall profile was noticeably chunkier thanks to thicker lugs and crown guards nearly twice the width of the previous model. The updated case proportions were Rolex’s response to the call from many collectors to increase the dimensions of their Professional Collection models, as the trend for larger watches was in full flow at the time.

Complementing the bolder case was another novel addition for the range, the Maxi dial. First seen on the green bezel 50th Anniversary edition Submariner from 2003 (nicknamed the “Kermit”), the Maxi dial features larger indexes and broader hour and minute hands. Just like the Super Case itself, the bigger dial furniture appealed more to some than others, but there was no doubt that it improved overall legibility. One other update was the use of a Triplock crown instead of the Twinlock variety found on older models. Originally developed for the Sea-Dweller to ensure its fearsome water resistance, Triplock crowns are now found on all of Rolex’s dive watches, along with modern Daytona, Yacht-Master, Yacht-Master II, and GMT-Master II watches (despite the fact that Rolex’s non-divers still retain their standard 100-meter depth ratings). 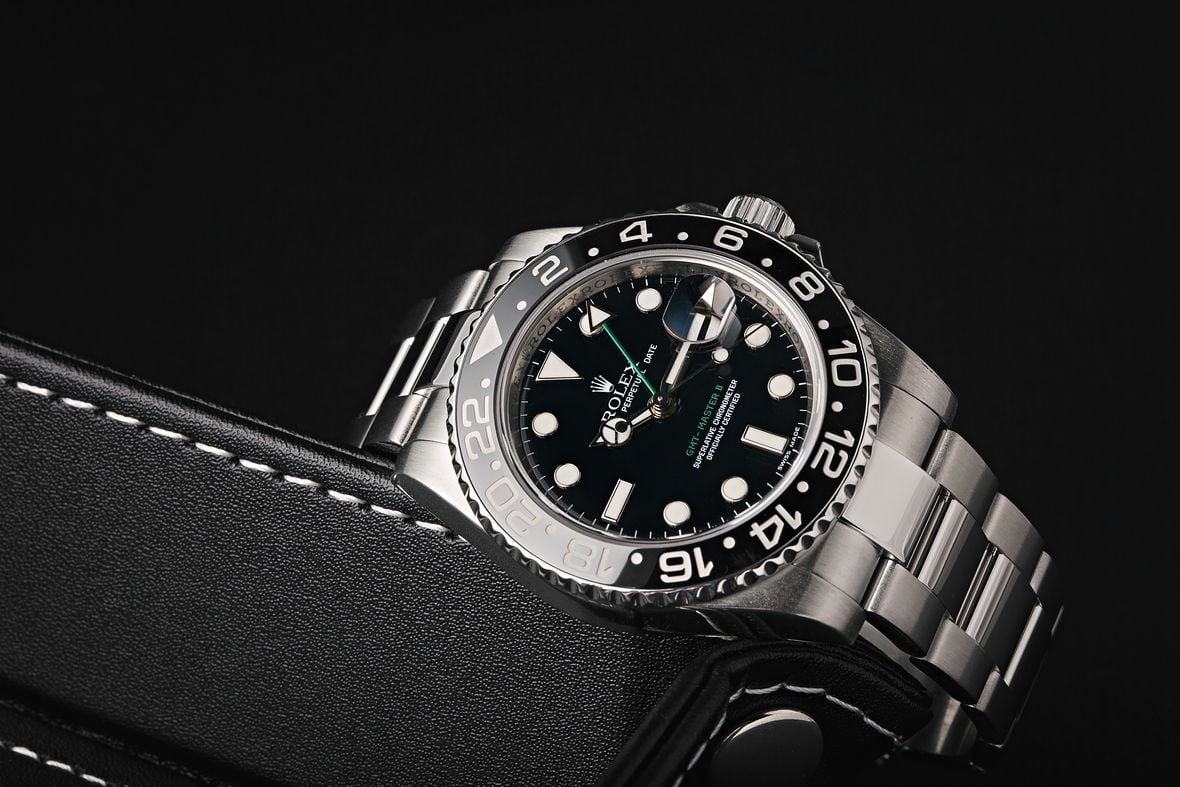 Naturally, the headlines surrounding the Rolex GMT-Master II ref. 116710LN all centered around its bezel. Rolex’s newly patented material (known as “Cerachrom”) would go on to replace the inserts used across many of the brand’s sports/tool watches, which had been made from aluminum since the 1950s. While strong and resilient, aluminum was still susceptible to scratching and fading over time from normal wear and use. Cerachrom was developed completely in-house by Rolex to be highly scratch-resistant and virtually impervious to the fading effects of UV light.

Starting out as extremely fine zirconium or aluminum oxide powder, the substance is mixed with various pigments to provide it with its final color, along with a binding gel to allow it to be molded into the desired form. Then, after being shaped by subjecting the material to high pressures and heating it to around 1,600°C, it is allowed to cool, which reduces its volume by 25% and leaves it incredibly strong and hard. The numerals are engraved using diamond-tipped milling tools, and the markings are then filled with either platinum or 18k gold (yellow or Everose) using a PVD technique before the whole component is given a final polish.

The advent of Cerachrom represented a momentous step forward for Rolex as a brand. However, as far as the GMT-Master II reference 116710LN was concerned, there was still a missing piece of the puzzle. Rolex had yet to devise a way of adding two colors to the bezel, something that had been the collection’s calling card since the very beginning. The split-color GMT bezel had become a vital characteristic of the watch’s identity. Rolex’s GMT watches had even been issued a number of nicknames in the past that were based on the style of their bezels – the Pepsi (blue and red), the Coke (black and red), and the Root Beer (brown and gold).

Rolex wouldn’t crack the bi-color ceramic problem until 2013 when the ref. 116710BLNR was unveiled with a blue and black Cerachrom bezel, garnering the watch another unofficial moniker (the “Batman”). With all of that in mind, the reference 116710LN was not the first black bezel GMT watch from the company’s history. Rolex had offered an all-black bezel insert as an option for the GMT-Master and GMT-Master II since the beginning of the 1970s, so the fact that the ref. 116710LN was fitted with a solid color bezel was not a departure from the collection’s history, but rather was simply a reflection of Rolex’s manufacturing capabilities at the time. 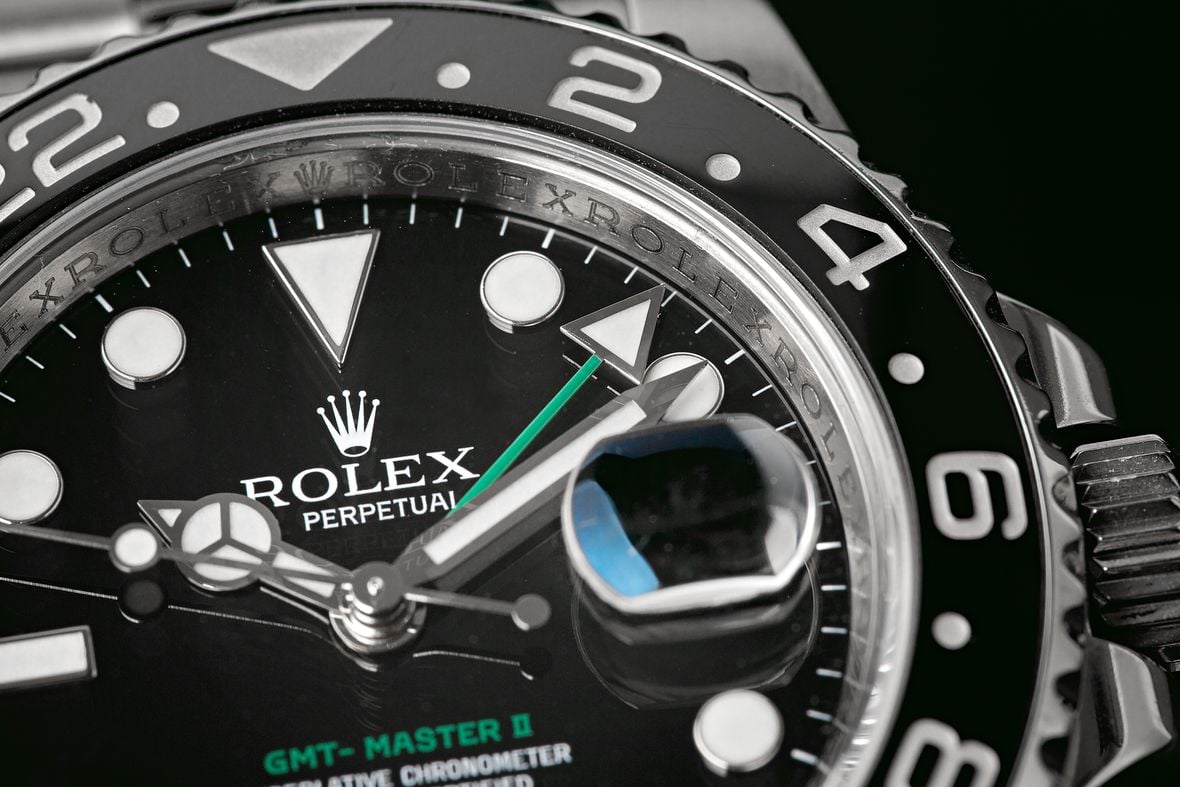 The movement inside the ref. 116710 is the in-house Rolex Caliber 3186. It was the replacement for the previous generation’s Cal. 3185 which had been in use since the late 1980s and in truth, the two movements were almost identical. The main reason for the change in caliber number was the slightly updated jump-hour mechanism and the implementation of Rolex’s proprietary blue Parachrom hairspring, which took the place of the Nivarox version found in the Cal. 3185.

An alloy of zirconium and niobium with a blue oxide coating, Parachrom is touted as being completely antimagnetic and virtually immune to temperature variations, along with being approximately 10-times more resistant to shocks. It first appeared inside the Caliber 4130 from the current series of the Daytona and has now been rolled out across almost the entire collection of Rolex movements, with the only exceptions being some of the smaller calibers that use Syloxi (silicon)  hairsprings.

The other thing that distinguishes the Caliber 3186 is that the wheels of its drive train were moved closer together. This eliminates the tiny shimmy you could see on the GMT hand of older models when the main hour hand was adjusted, tightening the whole thing up over the Cal. 3185. Functionality remained the exact same, with the core architecture of both movements being based on the legendary Cal. 3135, the longest-running and most widely used movement that Rolex has ever produced.

Another change, and one that is sometimes overlooked with the Rolex GMT-Master II ref. 116710LN is its modernized bracelet. The model was released on the three-link Oyster – the sportiest and least formal option among Rolex’s various metal bracelets. However, the ref. 116710LN was created during an era when Rolex was working hard at improving the overall quality of its bracelets, an area where it had received slight criticism in the past.

The links of the Oyster bracelet featured high-polished centers and were now entirely solid (including end-links), thus ensuring a solid weight and resilience, the newly redesigned bracelet also introduced the patented Easylink extension to the clasp. Rolex’s Easylink system allows for 5mm of extension (or contraction), completely on the fly and without the need for any tools. This means that the bracelet can be adjusted throughout the day to compensate for the natural fluctuations in wrist size that occur due to factors such as ambient temperature and humidity.

The Rolex GMT-Master II ref. 116710LN is the final example of the Rolex’s legendary pilot’s watch to be released with a single color bezel. It also happens to be a steel Rolex sports watch, making it one of the most revered timepieces of its kind ever made – and is now discontinued. As such, the ref. 116710LN makes one of the most attractive targets for today’s collectors, tempted not just by its rugged, understated aesthetics or its genuinely useful complication, but also for its future investment potential. With its all-black Cerachrom bezel and green GMT hand, the reference 116710LN doesn’t look like any other GMT-Master II watch, and that is exactly the reason why it might just be the next big thing. 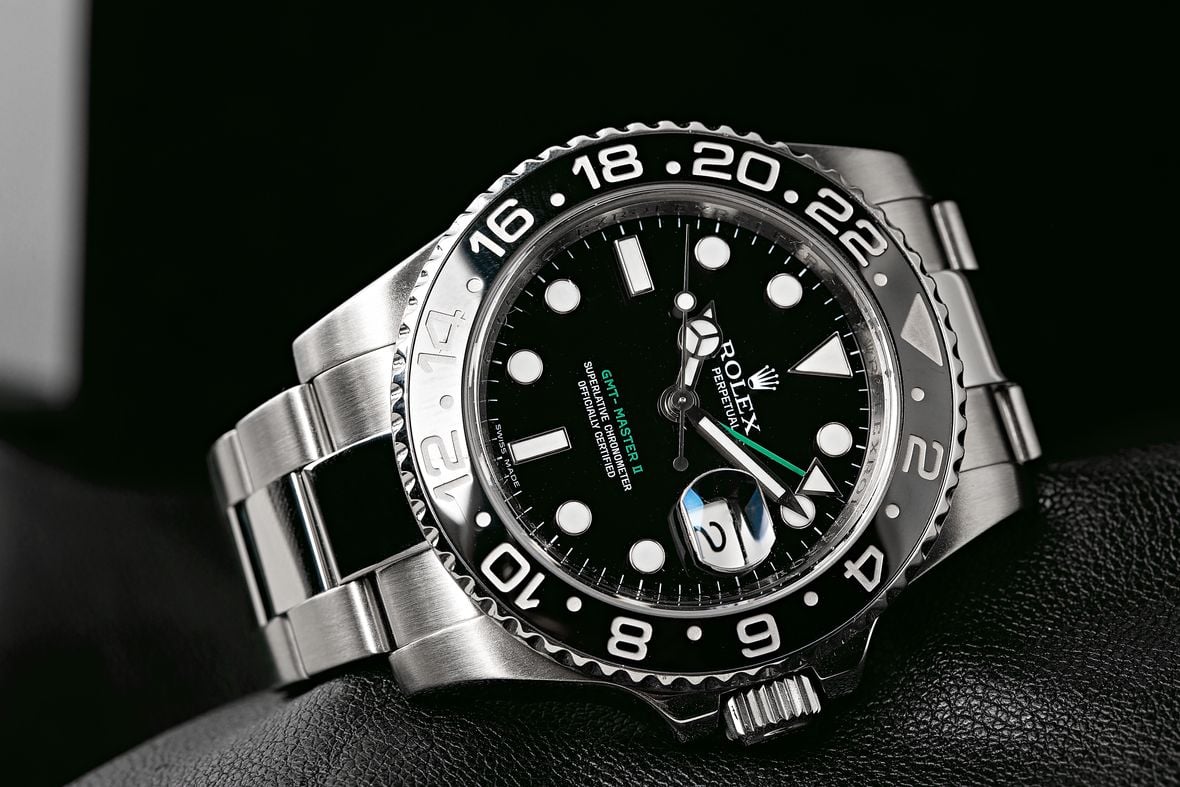