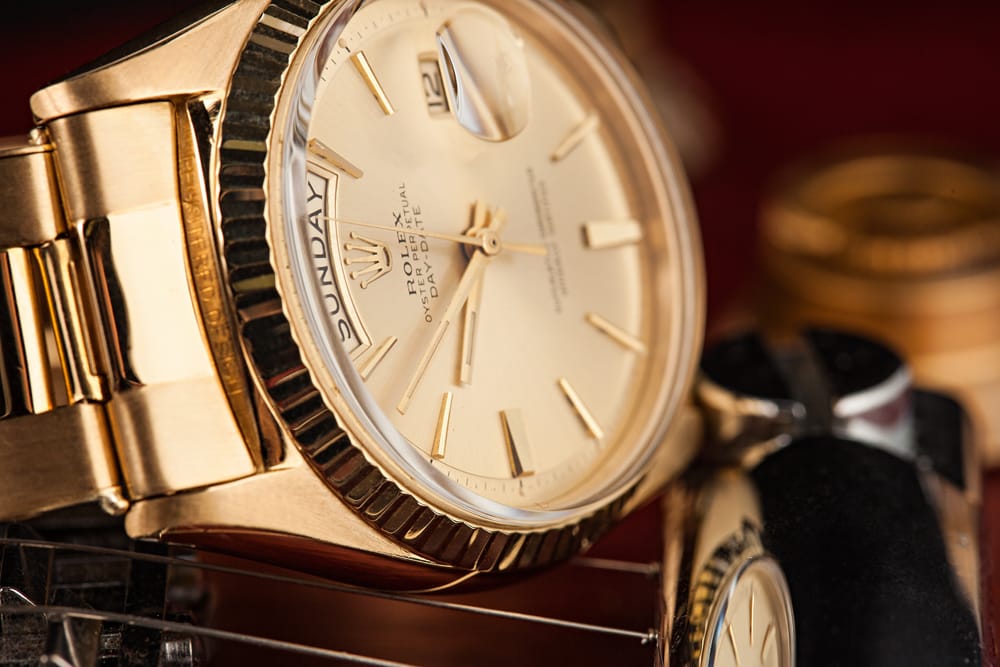 This week’s Vintage of the week is a Rolex Day Date 1803 that has been photographed on a Gibson Les Paul guitar.

Officially released in 1956, the Rolex 6511 “Day Date” revived the look and feel of the timepiece. The “Day Date” name came from two new features: a window at 12 showing the day and a subsequent window at 3 showing the date. I am sure that in ’56 there were many collectors who were excited to get this Rolex for sale at their local authorized dealer.   The addition of the day and date added extra complexity to the watch with the addition of the automatic movement day and date discs. The case became much thicker. This, however, was not a bad thing. Aesthetically, the larger, screw-down case, made the watch carry much more presence on the wrist. After the introduction of the “Rolex Day Date President 1803″ bracelet, featuring a concealed clasp, the popularity of the “Day Date” soared, quickly becoming Rolex’s most popular watch. 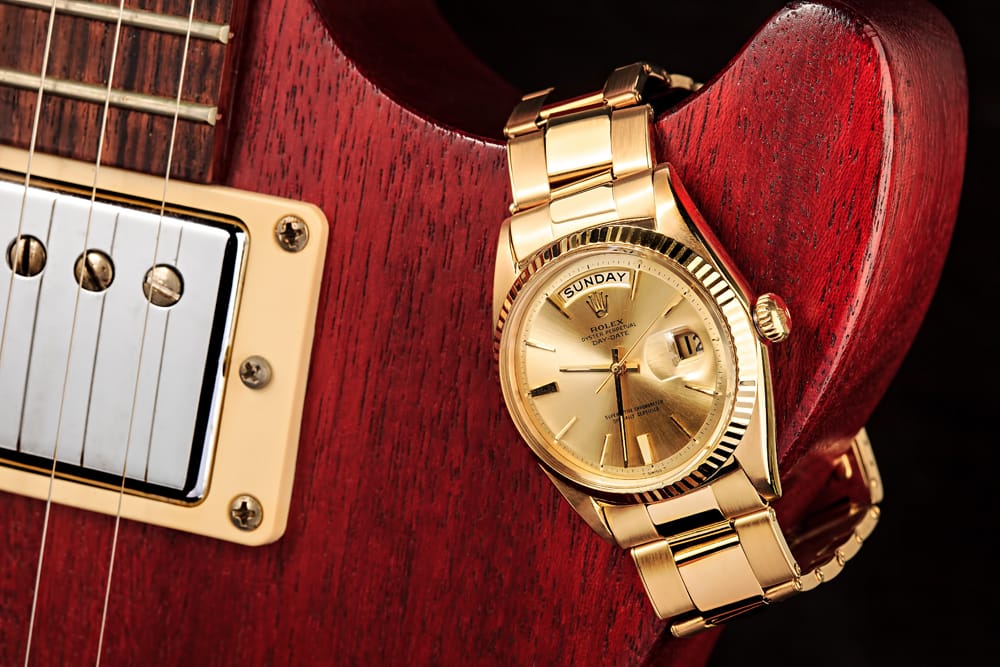 The externally identical 6611 model was released a year later, featuring the new caliber 1055 movement. The caliber 1055 movement offered a free sprung Micro-Stella balance. With an accuracy standard guarantee within + 3.0 seconds per day, this version was the first to be labeled “Superlative Chronometer Officially Certified” on the dial. After several caliber evolutions, the double quick-set caliber 3155 was introduced in model 18238 in 1988. The caliber 3155 is still used in all Rolex Day-Date models to this day. 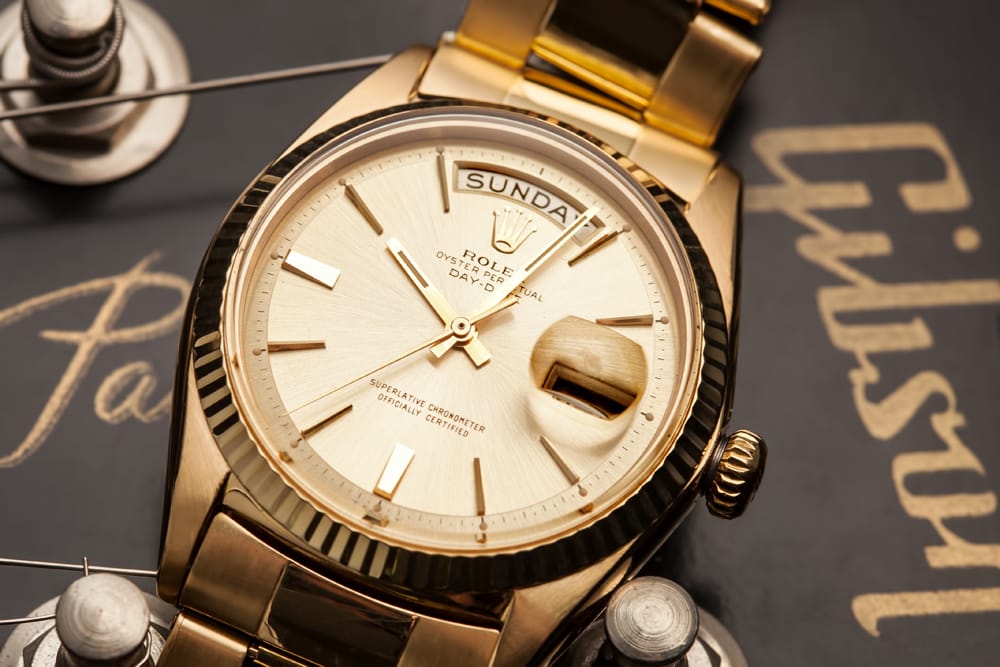 The Day Date quickly came to represent accomplishment, having been worn by some of the most accomplished men in the world, including Winston Churchill and Dwight Eisenhower. The watch eventually earned the nickname “the Presidents’ watch,” as several US presidents, including Roosevelt, Eisenhower, Kennedy, Johnson, Nixon, Ford, and Raegan, are all known to have worn a Day-Date. Initially, the tern “President” referred to the type of bracelet attached to the Day Date. However, it soon came to commonly refer to the entire timepiece. 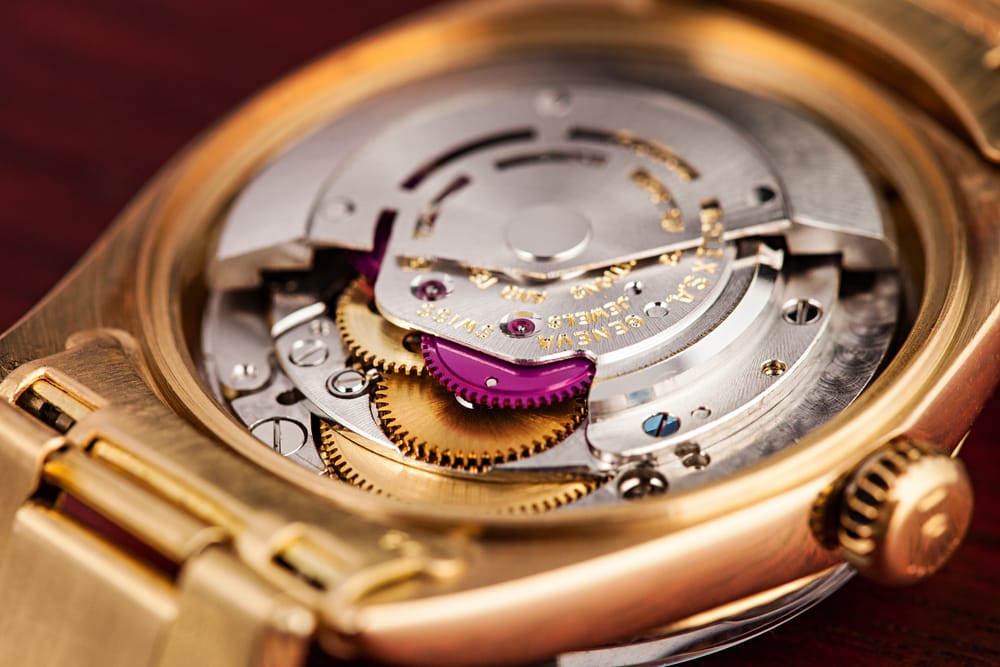 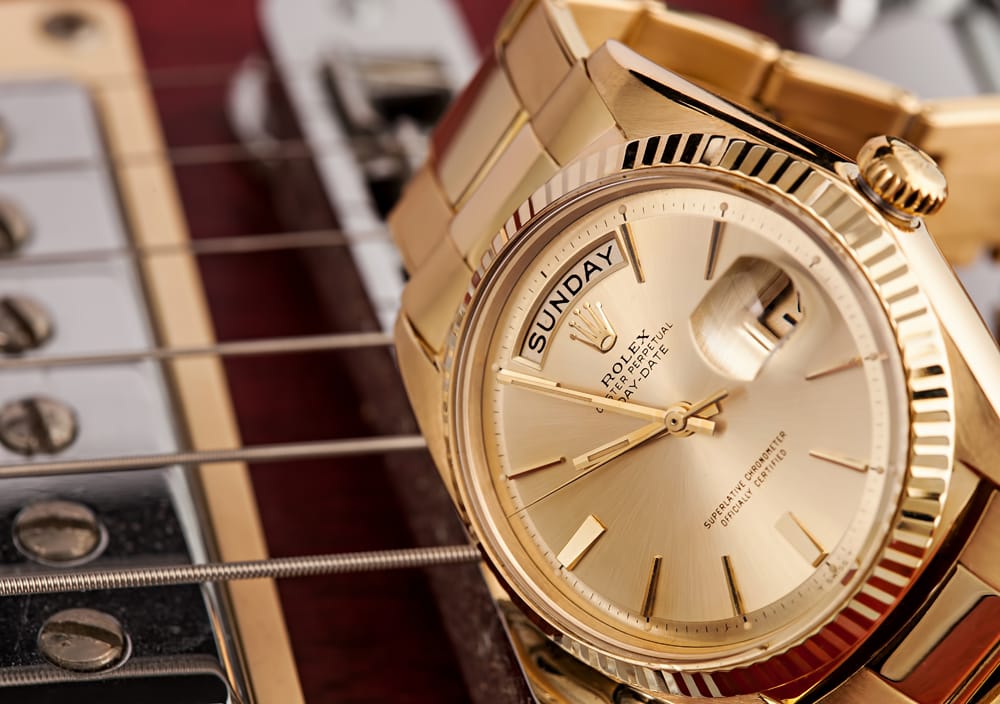 Some technological changes were made over the next few years, including the addition of the “hack” feature around 1972. The hack feature allowed the second hand to be stopped the time needed to be reset. The later “quick set” feature, introduced with caliber 3055in the late 1970’s, allowed the wearer to simply pull the button out half way and, with a few turns, correct date displayed. Before, many turns were needed. The inclusion of sapphire crystal was another great advance for the Day Date. The sapphire crystal added to the durability of the watch, fitting tighter than the plastic previously used. It also had great aesthetic value, offering near scratch proof resistance and a sleeker look than before that adds to the Rolex’s value if you are looking to sell your Rolex. 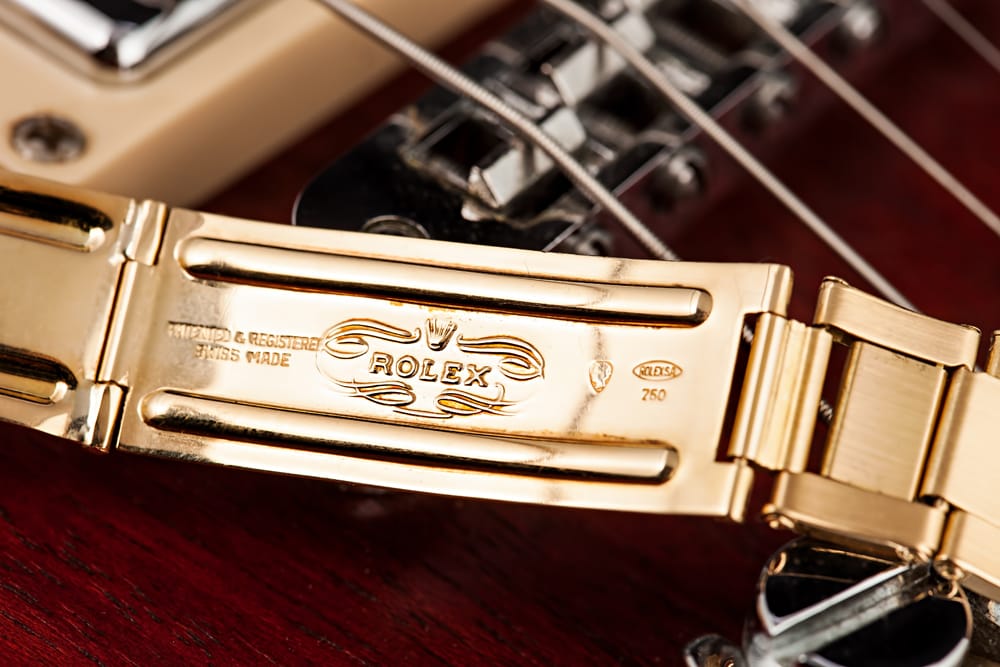 By 1989, the “double quick set” was introduced with caliber 3155. This allowed the date and day to be easily and quickly changed with the same button. Aesthetically, jewels were added, including diamonds on the bezel, creating a richer and more luxurious look. 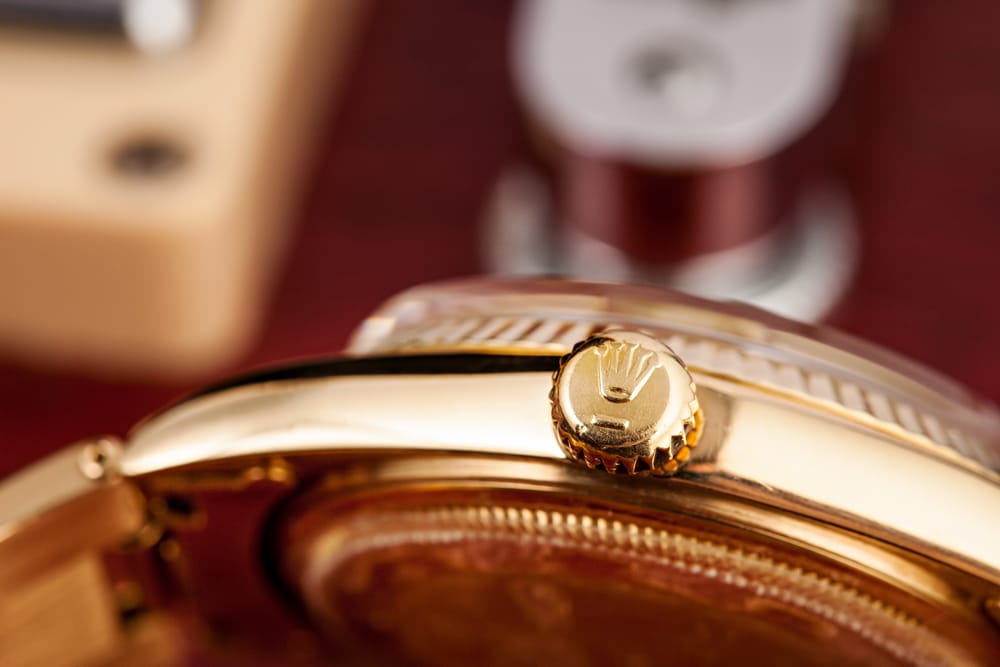 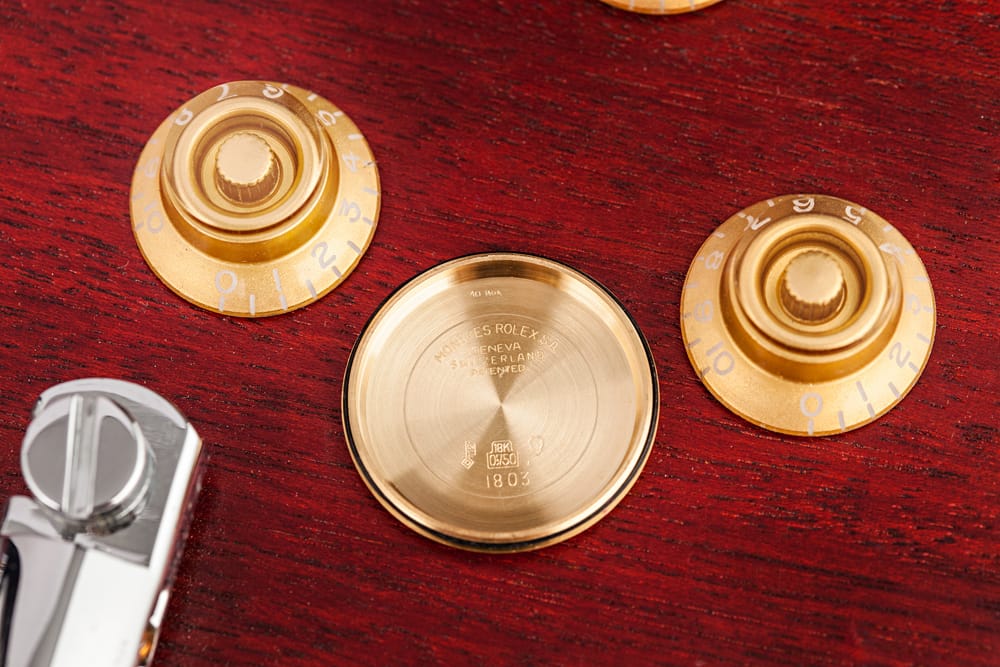 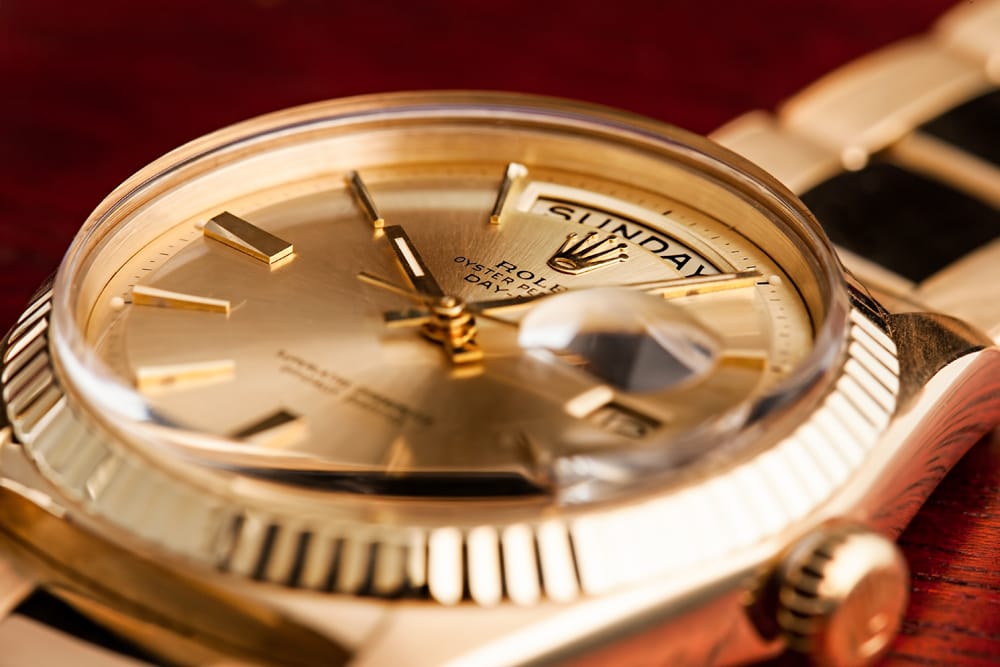 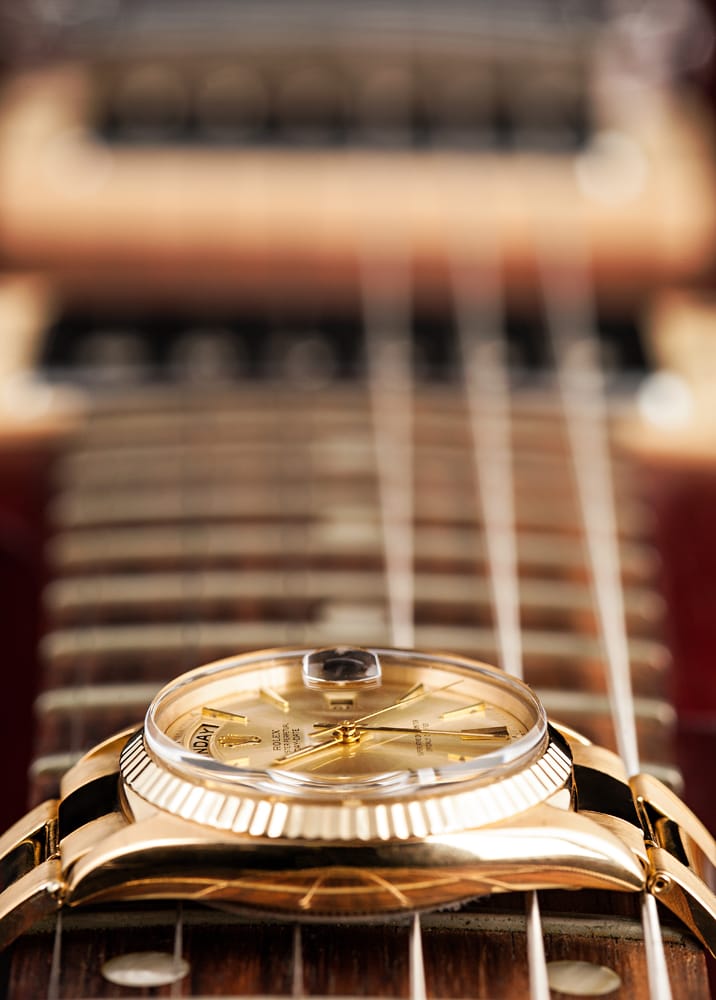