Since its first introduction in 1971, the Rolex Explorer II - the larger, more advanced sibling of the classic Explorer - has undergone many changes and upgrades. However, one of the most notable is the evolution of the prominent 24-hour hand over the lifetime of this famous tool watch.

Just like how the GMT-Master is for pilots and the Submariner is for divers, the Rolex Explorer II was built for spelunkers (cave explorers). The 24-hour hand was originally added to the Explorer II specifically to serve as a prominent AM/PM indicator. The 24-hour hand circles the dial once per day and displays the time in relation to the fixed bezel, which allows the wearer to distinguish between day and night hours without needing to reference the sun. 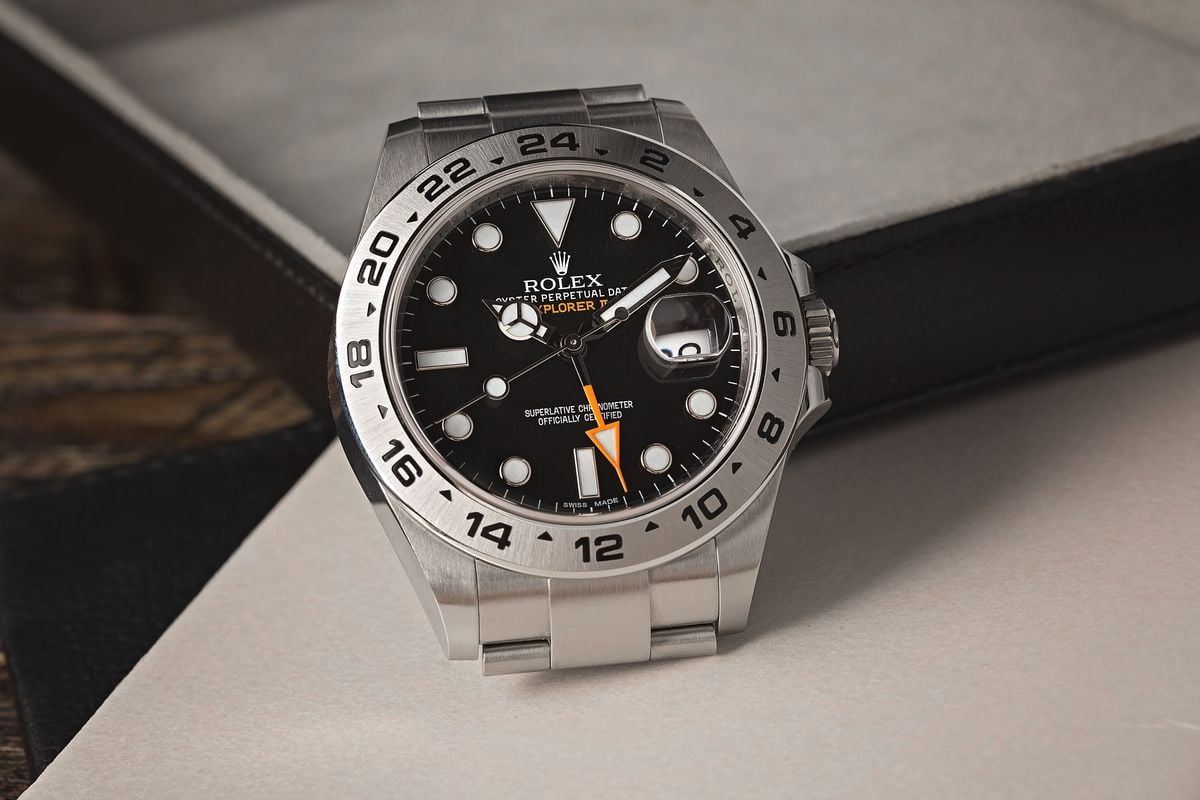 The Different GMT-Hands on the Rolex Explorer II

There are three distinct generations of 24-hour hands that have appeared over the lifetime of the Rolex Explorer II, let’s take a closer look. 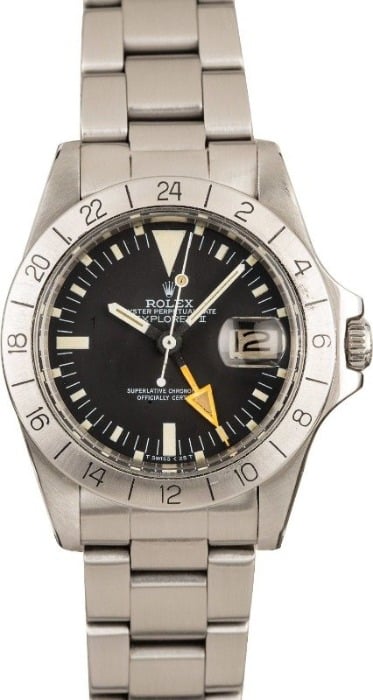 The reference 1655 was the first iteration of the Rolex Explorer II. These early ref. 1655 watches were outfitted with bright orange 24-hour hands; however you will also find certain examples that have their 24-hour hands in red. With that in mind, the color of the hands on many ref. 1655 watches has faded to some degree or another. Orange hands can be varying shades of orange (some almost entirely white), and a fair number of the red hands now actually appear orange in color.

Another defining feature of this 24-hour hand is its large arrow-tip, which garnered the ref. 1655 the nickname 'Freccione' - the Italian word for 'arrow' being freccia. Famously, this watch is also called the Steve McQueen, even though there’s no evidence that he ever wore this watch. In regards to the 24-hour hand itself, you will notice that its triangular tip is filled with lume, with the tip extending straight out to point directly at the corresponding hour on the fixed 24-hour bezel.

Additionally, for this generation of the Rolex Explorer II, its 24-hour hand is not independently adjustable. This means that it is permanently synchronized to the rest of the hands, and will just make one full rotation of the dial every 24-hours. 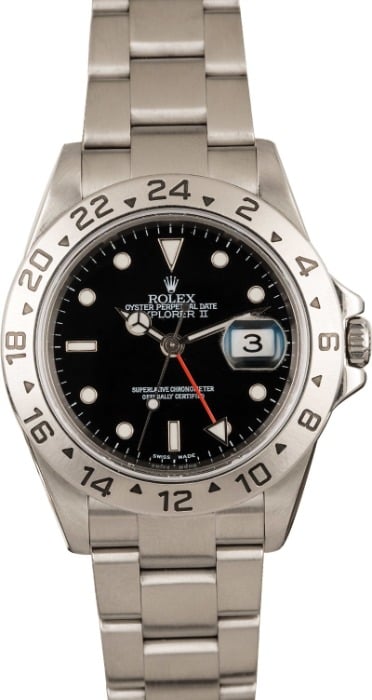 The ref. 16550 was the second Explorer II reference and introduced the independently adjustable 24-hands, along with a sapphire crystal, and a new case and dial design. By the end of the 1980s, Rolex transitioned the Explorer II from the ref. 16550 to the ref. 16570; however the overall design of the watch remained virtually unchanged. With that in mind, we're focusing on that 24-hour hand, which you can see, was drastically changed with this generation.

Sharing a movement with the GMT-Master II collection, the 24-hour hands on this generation of the Explorer II look identical to the one ones found on the GMT. The one exception is the hands of the white or 'Polar' dial version of the ref. 16570, which are finished black rather than polished white gold like on the ref. 16550 and the black dial versions of both references.

Instead of featuring the 'fat' arrow, the 24-hour hand was elongated, thinned out, and colored red. Additionally, as it was now independently adjustable from the regular time-telling hands, the Rolex Explorer II's 24-hour hand became a GMT-hand and could display a second timezone. The luminous arrow tip continued to exist, but was miniaturized and moved all the way up to the tip. Another notable change was that the arrow was no longer the same bright coloring of the hand itself; only the shaft of the arrow is painted red on this generation of Explorer II watches. 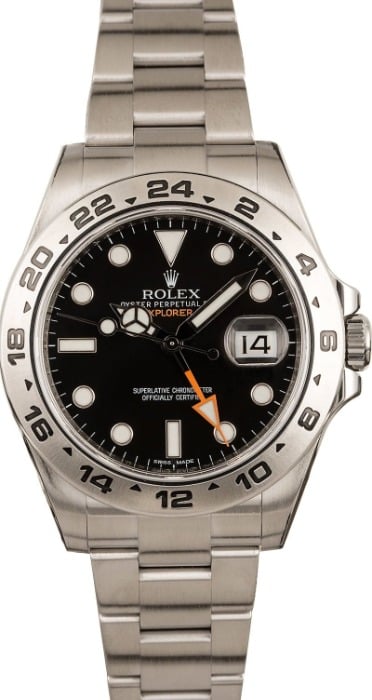 For the 40th anniversary of the famous Explorer II, Rolex reintroduced the orange 24-hour hand on the ref. 216570 to pay homage to the original ref. 1655. Although the size of the watch increased to 42mm, the overall shape of the 24-hour hand is near-identical to the original, featuring a large, lume-filled arrow with a tip that extends out towards the corresponding 24-hour scale on the bezel.

To stay proportional with its increased size, the 24-hour hand has also been enlarged to match the Maxi dial and the larger 42mm case. While they look very similar, the key difference between this generation of 24-hour hand and the one on the original model is in regards to functionality. Like the previous generation, the 24-hour hand on this latest version of Explorer II is independently adjustable and can be used to track a secondary timezone.

You can easily distinguish between watches from this generation and the first Explorer II simply due to age, dial style, and case size. However, if you're ever confused, note that the standard hour hands on the ref. 1655 are always pencil shaped, while modern Rolex Explorer II watches all have the more common Mercedes-style hands.