New OMEGA Speedmaster Dark Side of the Moon ALINGHI

The Omega Speedmaster is truly a watch that needs no introduction. Celebrated around the world for being the first watch worn on the moon and the only timepiece that is certified by NASA for both spaceflight and EVA (spacewalks), the Omega Speedmaster is a bonafide industry icon and one of the most famous wristwatches of all time.

Since its initial release in 1957, the OMEGA Speedmaster collection has been used as a platform for a wide variety of different Omega watches with chronograph complications, including a number of limited and special edition references that have been produced over the years. The latest addition to the Omega Speedmaster family pays tribute to Omega’s relationship with Alinghi and is based on the brand’s Dark Side of the Moon watches.

OMEGA Speedmaster Dark Side of the Moon ALINGHI 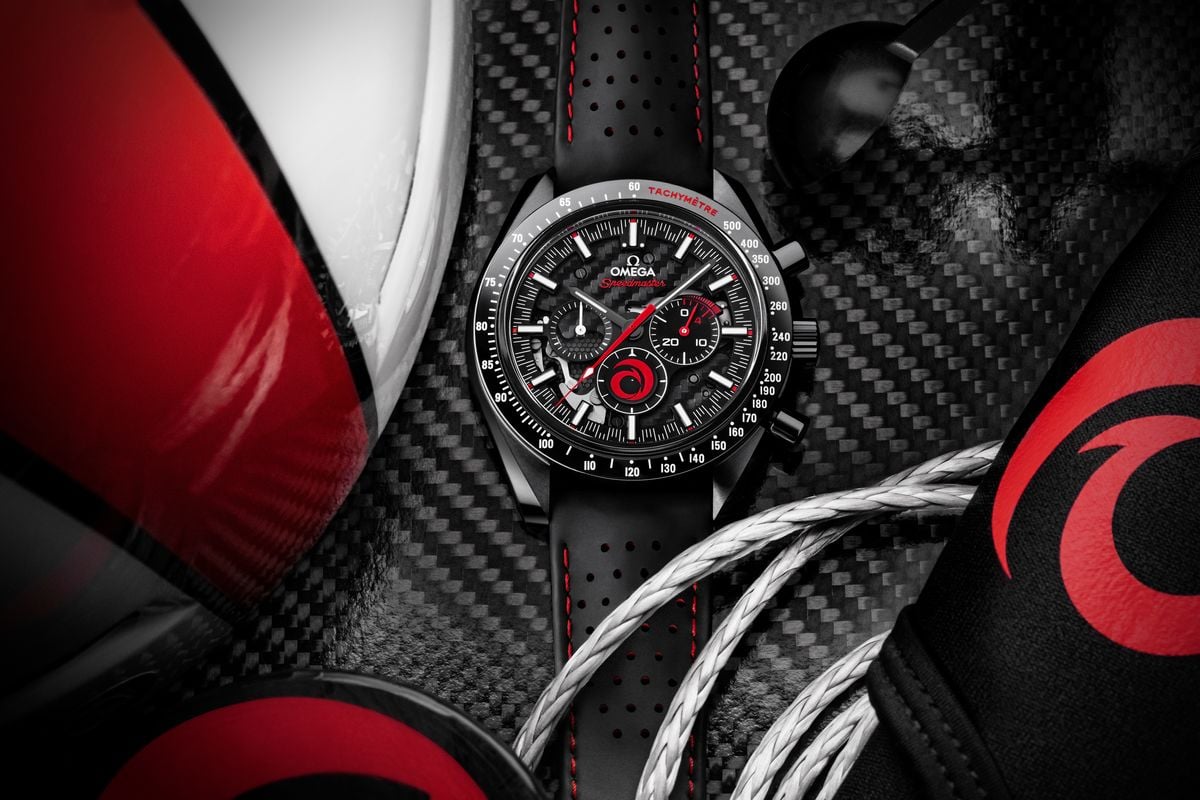 Click here to learn more about how NASA tested the Omega Speedmaster.

Based on the Caliber 1861 that powers the classic Omega Speedmaster Professional Moonwatch, the new Cal. 1865 is a thin and lightweight manually-wound, integrated chronograph movement. However, unlike the Cal. 1861, the Caliber 1865 features unique engravings on its bridges that allude to the Alinghi team’s racing boat. The mainplate and barrel bridge have been given a honeycomb pattern (a reference to the carbon hull interior of the Alinghi boat), while all other bridges have been finished with a black carbon pattern (also inspired by the boat’s carbon hull). 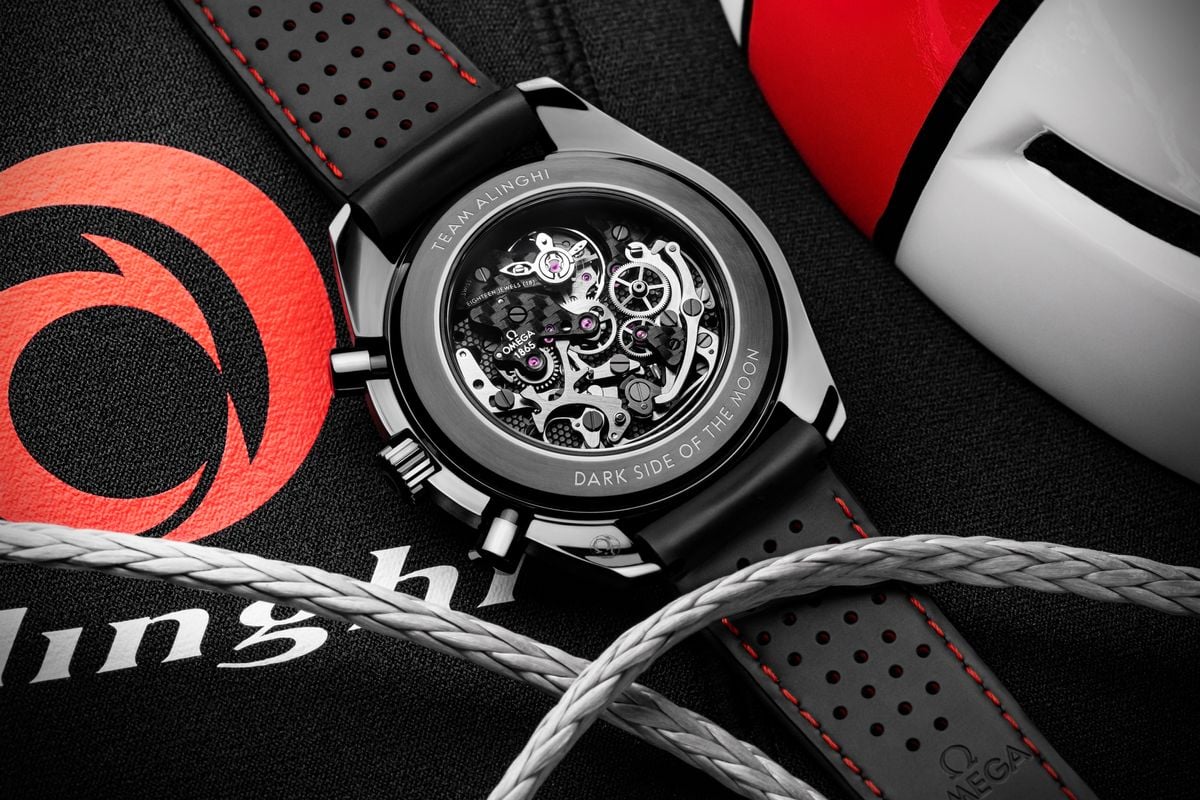 Anyone familiar with the world of regattas and yacht racing will be familiar with Alinghi. Officially founded in 2003, Alinghi is a syndicate set up by Ernesto Bertarelli to compete in the America’s Cup, as well as other competitions. Racing under the colors of the Société Nautique de Genève, Alinghi’s partnership started in 2019, and the new Omega Speedmaster Dark Side of the Moon Alinghi pays tribute to the two brands’ shared passion for innovation and sailing.

The new Omega Speedmaster Dark Side of the Moon Alinghi edition embraces a primarily red and black color profile – red to represent passion, and black for technology. The 44.25mm case is constructed entirely from black zirconium oxide ceramic and it is fitted with a matching black and red rubber strap. The start/stop pusher for the chronograph is even finished with the Alinghi logo in red varnish.

Additionally, instead of having a traditional hand positioned within the sub-dial located at 6 o’clock, the new Omega Speedmaster Dark Side of the Moon Alinghi is fitted with an anodized aluminum disc, finished with the Alinghi logo, which rotates whenever the chronograph complication is activated.

The brand-new Omega Speedmaster Dark Side of the Moon Alinghi edition is now available at Omega boutiques and authorized retailers, and is accompanied by an official retail price of $10,800 USD. For those that are fans of the Alinghi team or regatta racing in general, this new Omega Speedmaster is the perfect chronograph. 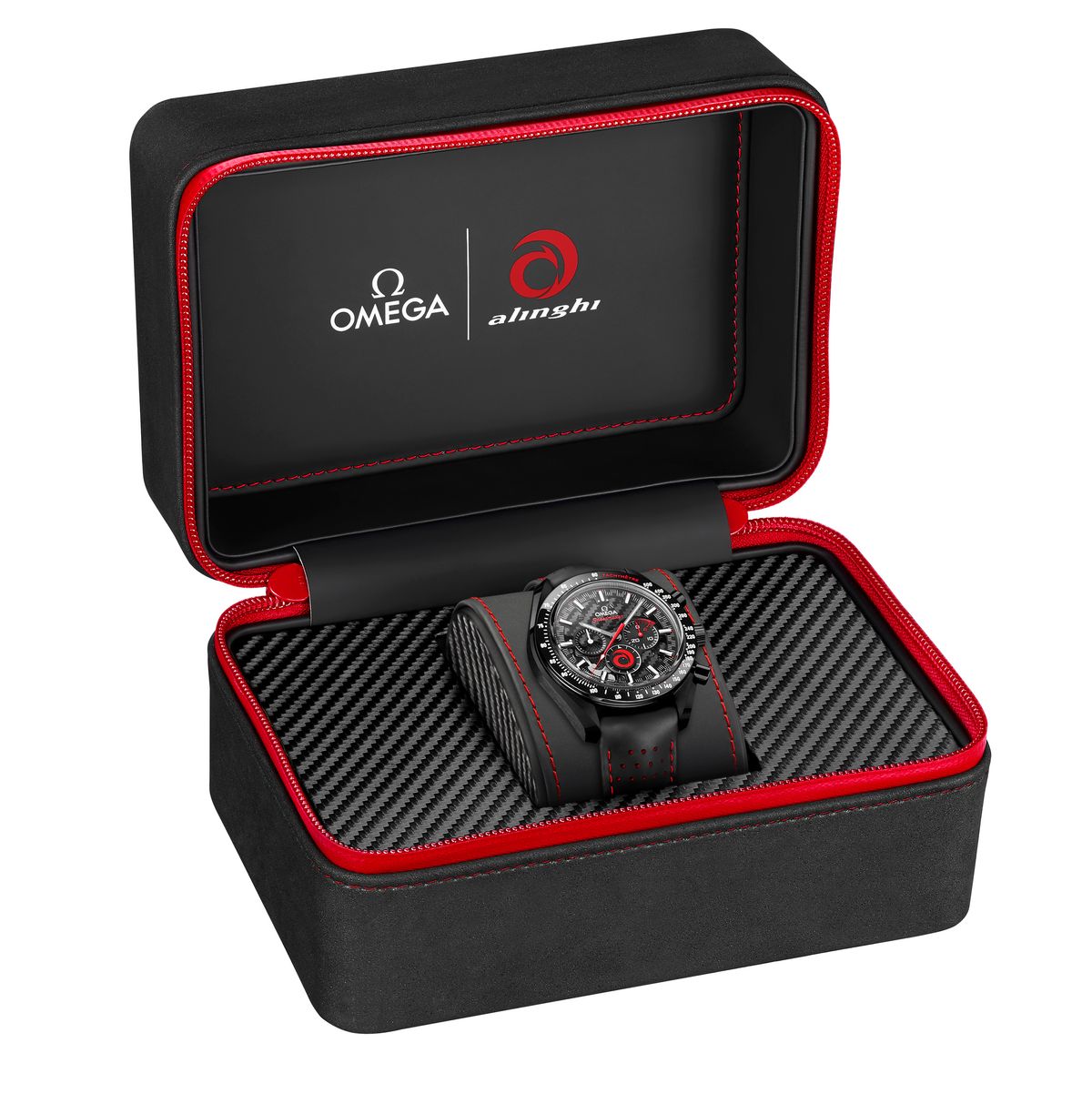