The word “flieger” is German for “airman” and in watch collecting circles, Flieger watches represent a very particular style of pilot’s watches with a design that dates back to WWII. Let’s investigate the origins of the pilot’s watch, the birth of the Flieger watch, and some modern examples from luxury timepiece manufacturers that embrace the vintage style and military heritage of this classic tool watch. 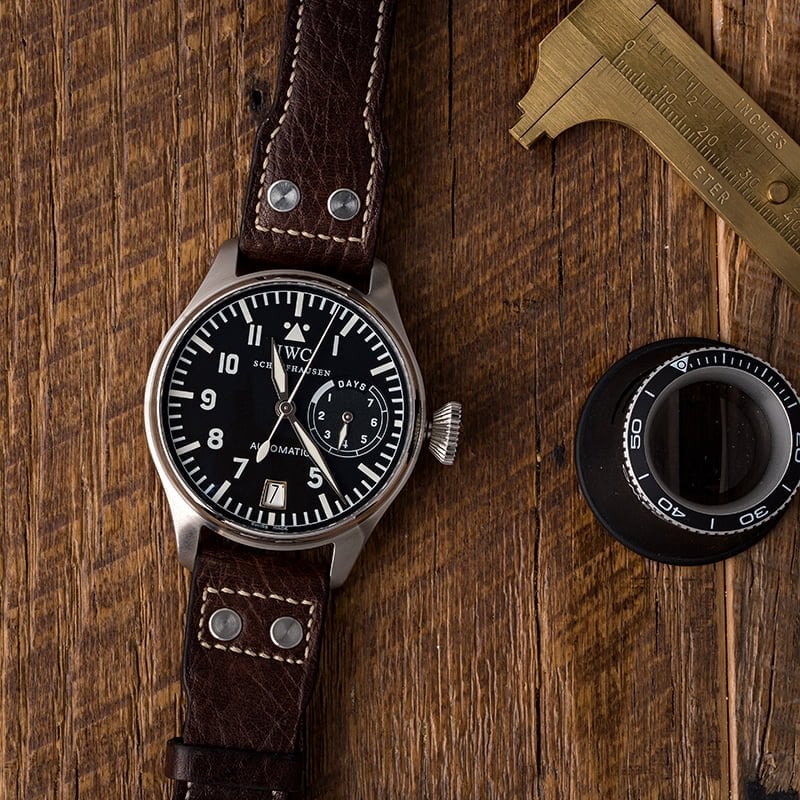 While Cartier may be the furthest brand that comes to mind when it comes to tool watches, Louis Cartier actually invented the very first pilot’s wristwatch. That was back in 1904, and it was for his friend Alberto Santos-Dumont, the pioneering aviator. Five short years later, Louis Blériot made history as the first man to fly an aircraft across the English Channel, and on his wrist was a Zenith pilot’s wristwatch. 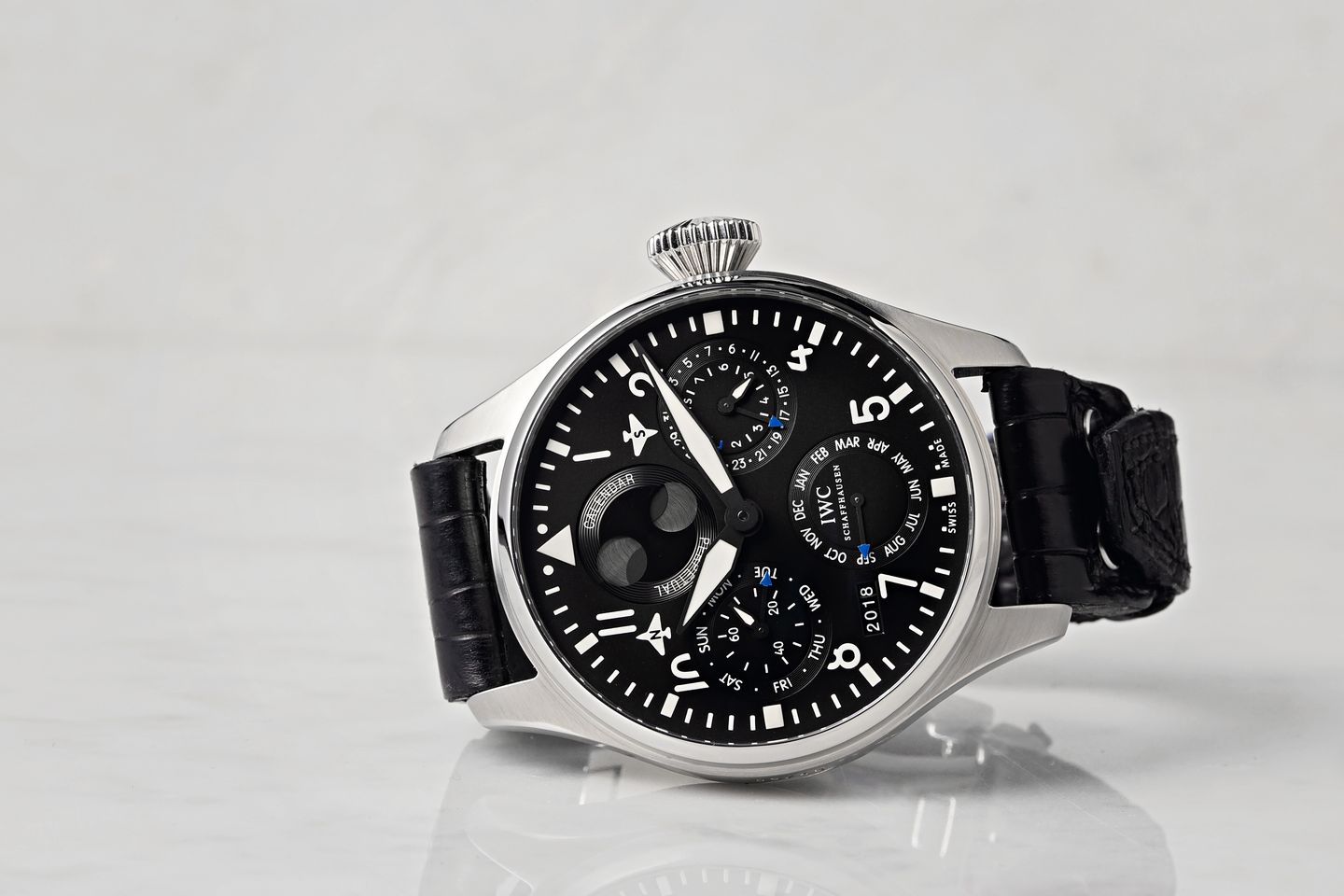 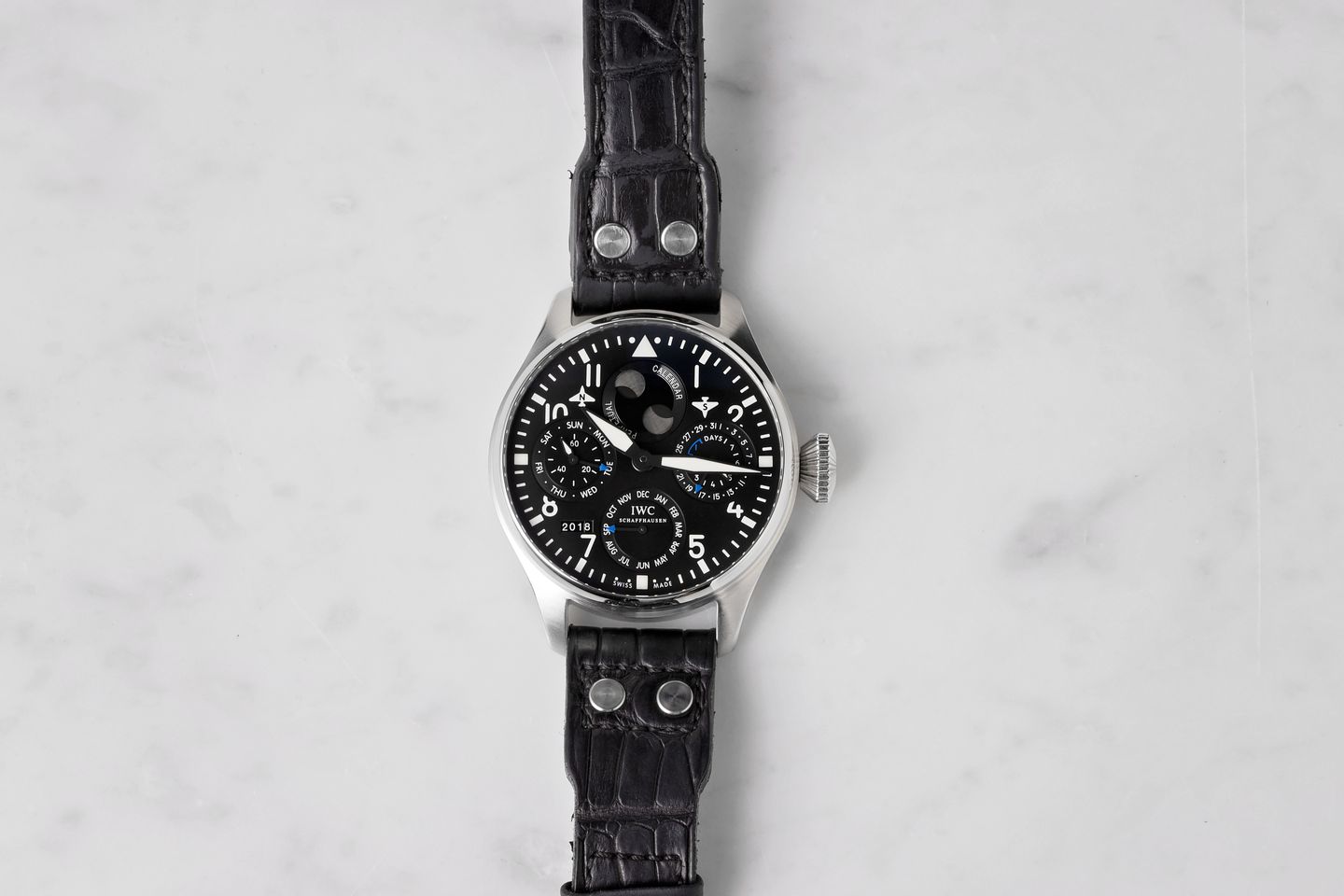 After Charles Lindbergh completed the first solo non-stop flight across the Atlantic Ocean in 1927, he teamed up with Longines to design the Hour Angle watch, which could calculate longitude during a flight. In 1936, IWC unveiled the first “Special Pilot’s Watch” with an arrow marker on the rotating bezel to record takeoff times.

When WWII began in 1939, pilot watches were once again required by different air forces around the world. The Americans had the American A-11 watches, supplied by Bulova, Elgin, Hamilton, and Waltham. The British had the “W.W.W.” (Wrist. Watch. Waterproof) models, supplied by Buren, Cyma, Eterna, Grana, Jaeger-LeCoultre, Lemania, Longines, IWC, Omega, Record, Timor, and Vertex (a.k.a. the Dirty Dozen). And the Germans had the B-Uhren watches, supplied by A. Lange & Söhne, IWC, Laco, Stowa, and Wempe. 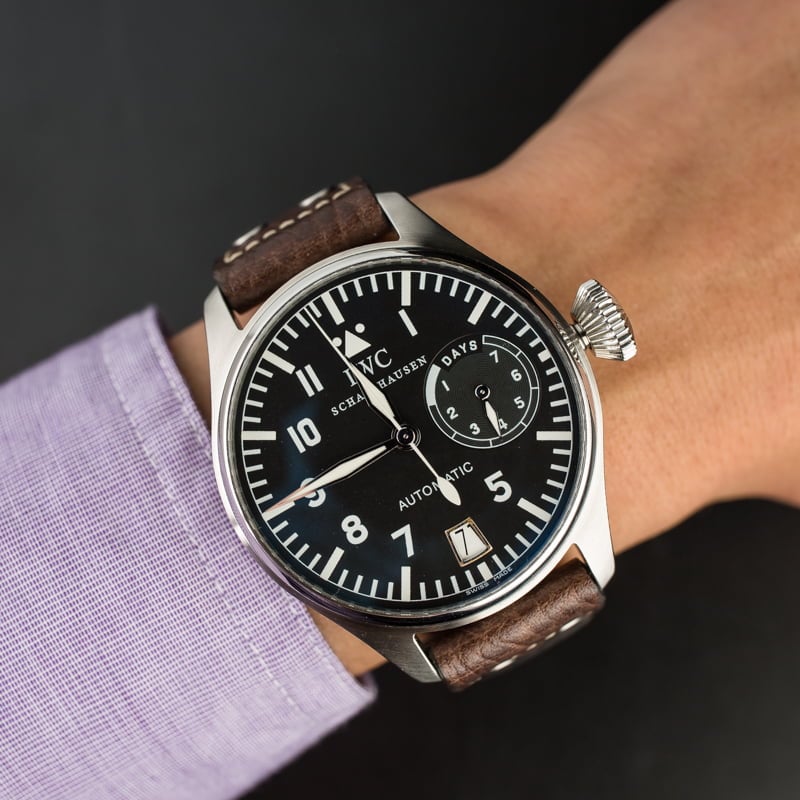 German for “Observer-Watch,” the Beobachtungs-Uhren (also known as B-Uhren, B-Uhr, or flieger) models were made for the German Luftwaffe (Germany’s air force) during WWII. The military requirements were clear; these had to be very large wristwatches with very legible dials.

The Flieger watches measured a massive 55mm in diameter and came equipped with matte black dials to avoid any distracting reflections. For easy reading, the dials included a triangular marker at 12 o’clock, a 60-unit track around the periphery, and luminescent center hands painted with radium. The B-Uhren watches were fitted with extra long leather straps designed to wrap around the outside of a pilot’s jacket. There were two types of Flieger watches: Type A and Type B. 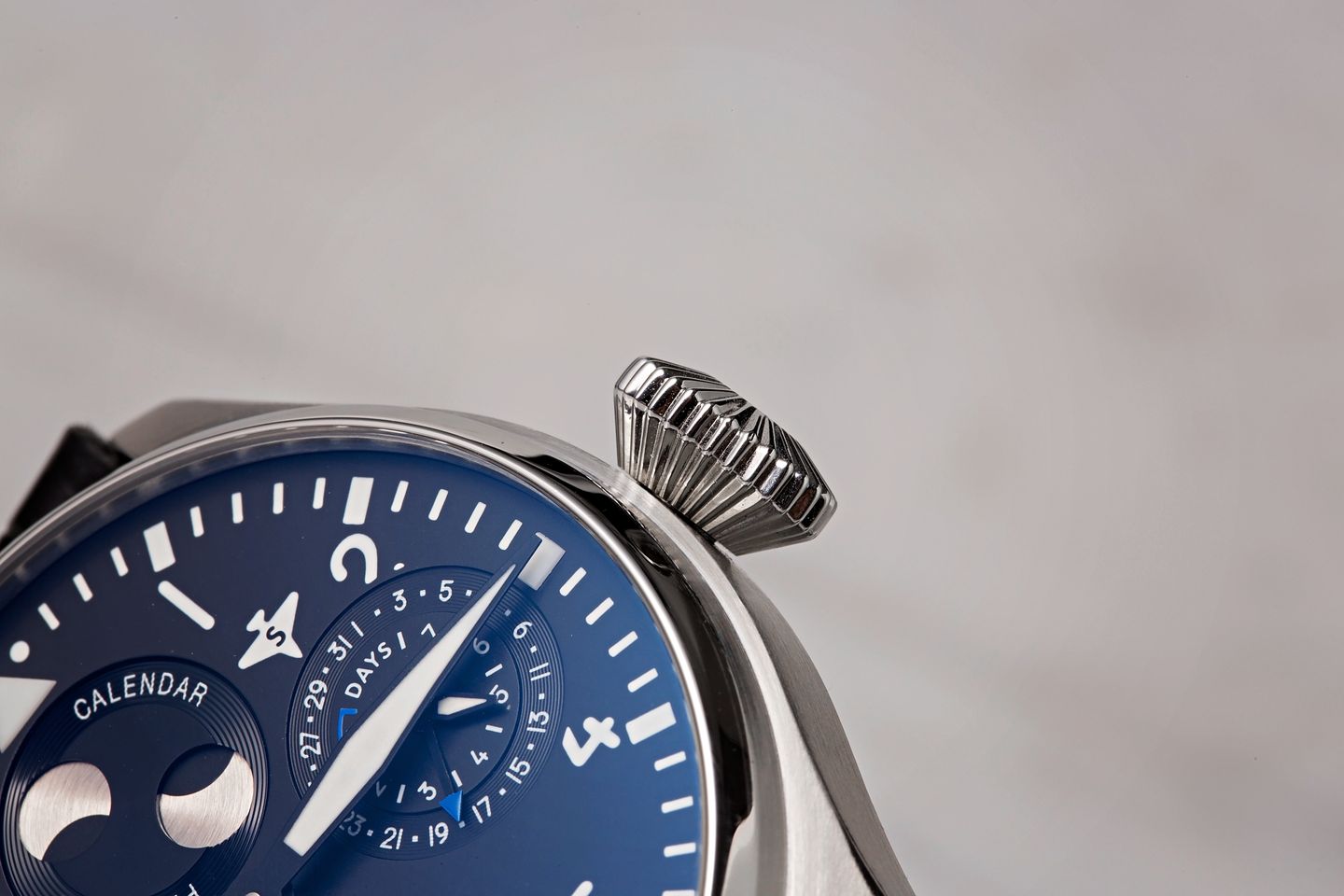 The B-Uhren Type A models had the simpler style dial, characterized by hour markers from 1 – 11 and two small dots flanking the triangle at 12 o’clock. The B-Uhren Type B watches (which came out in 1941) included minute markers adjacent to the minute track followed by an inner ring with hour markers. The 12 o’clock triangle was modified to look like an arrow and the two dots were eliminated.

Powering the German Flieger watches were manually-wound pocket watch movements, protected by an iron shield to make them anti-magnetic. To accommodate thick pilot gloves, the B-Uhr winding crowns were oversized and grooved. The movements also included a hacking feature – where the seconds hand stops when the winding crown is pulled out – to permit perfect time synchronization during missions. 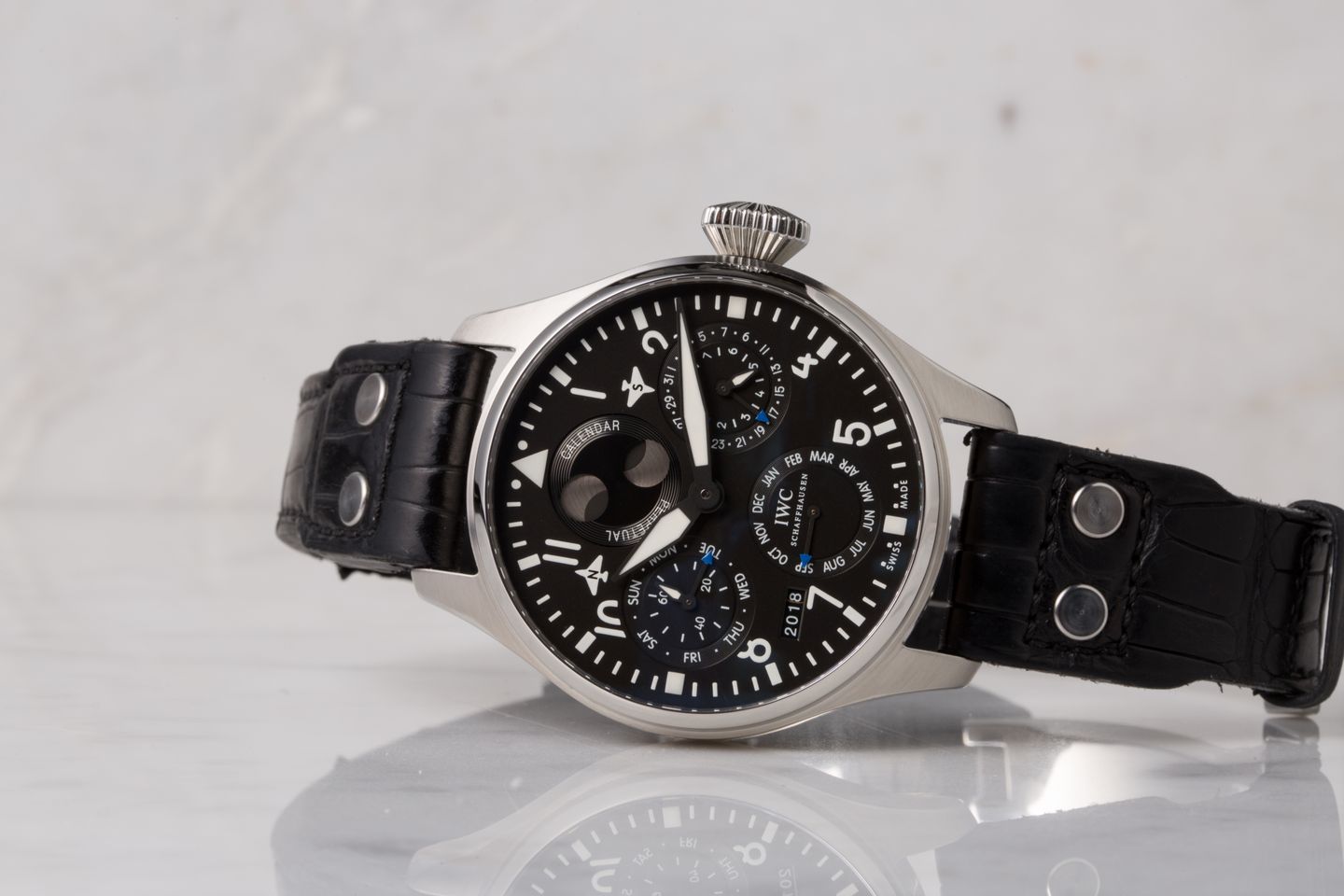 Despite its ominous origins, the Flieger design continues to be a very popular style of pilot’s watches today. Stowa and Laco continue to make their once-military models for the public, while there are also other brands like Sinn, Orient, and Citizen that make modern-day Flieger watches.

However, perhaps the most famous Flieger watches in production today are those from IWC. Look closely at the Pilot’s Watches and the Big Pilot’s Watches from IWC and you will immediately see the direct link to the original B-Uhren Type A models. 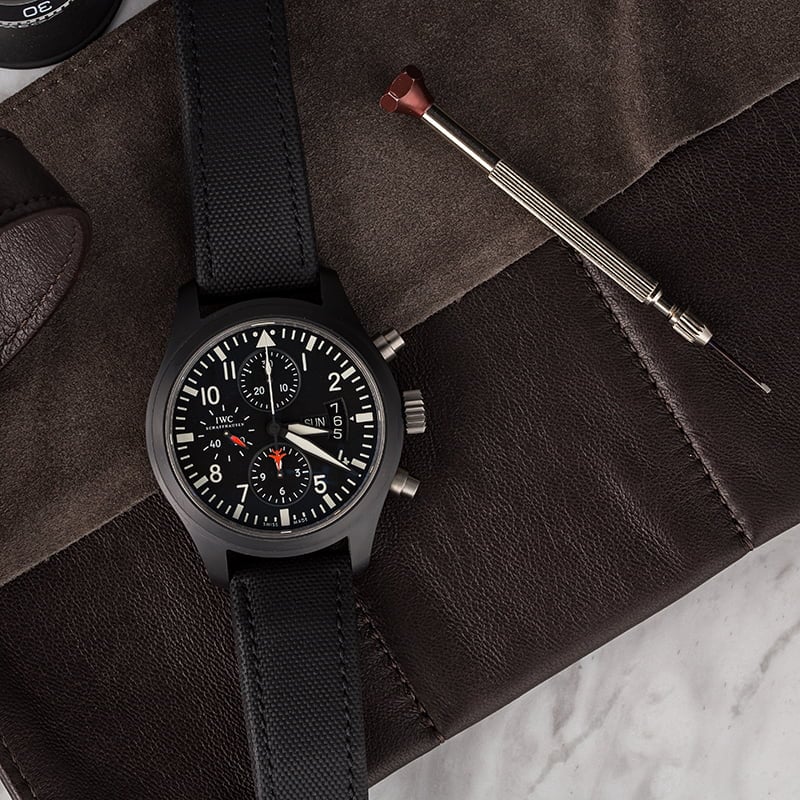