The Cellini is like the middle child of the Rolex family – it tends to go unnoticed. Though it may dwell in the shadow of big hitters like the Daytona and may not be as universally appealing as the Day-Date, the Rolex Cellini has cemented its place in the brand’s catalog as its most creative and underrated model.

In contrast to the design consistency of Rolex Oyster watches, Rolex Cellini watches are incredibly diverse, featuring an expansive array of case shapes, bracelet designs, movement types, and material options. An emphasis on variety and avant-garde design rather than consistency may explain why the Cellini line never attained quite the same kind of success as Rolex’s Oyster line – simply put, it can sometimes be difficult to immediately identify a Cellini as a Rolex watch.

However, to promote a greater understanding of this often overlooked but incredibly worthy timepiece range, we’ve compiled the ultimate buying guide on Rolex Cellini watches. 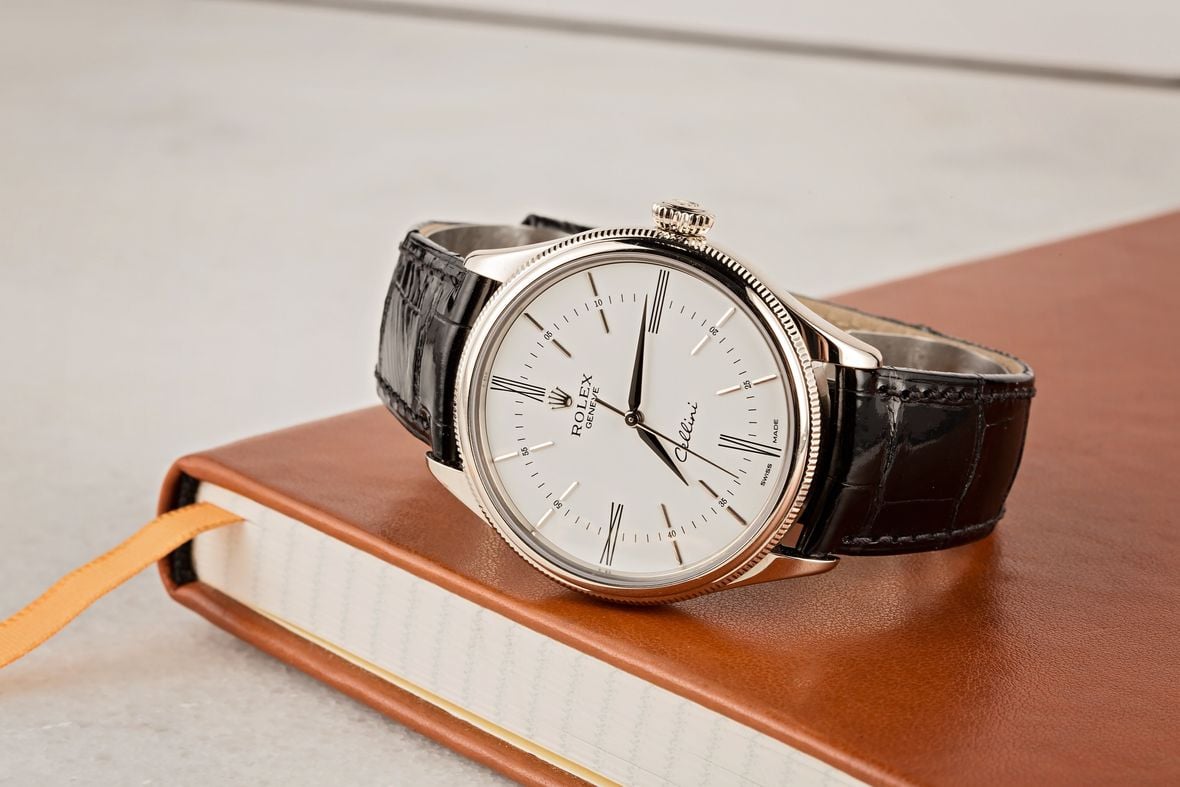 – Named after the Italian goldsmith and sculptor Benvenuto Cellini

– Only crafted from either solid gold or platinum.

– Can be powered by either quartz or mechanical movements.

– Does not use Rolex’s Waterproof Oyster Case.

Click here to learn more about the history of the Rolex Cellini. 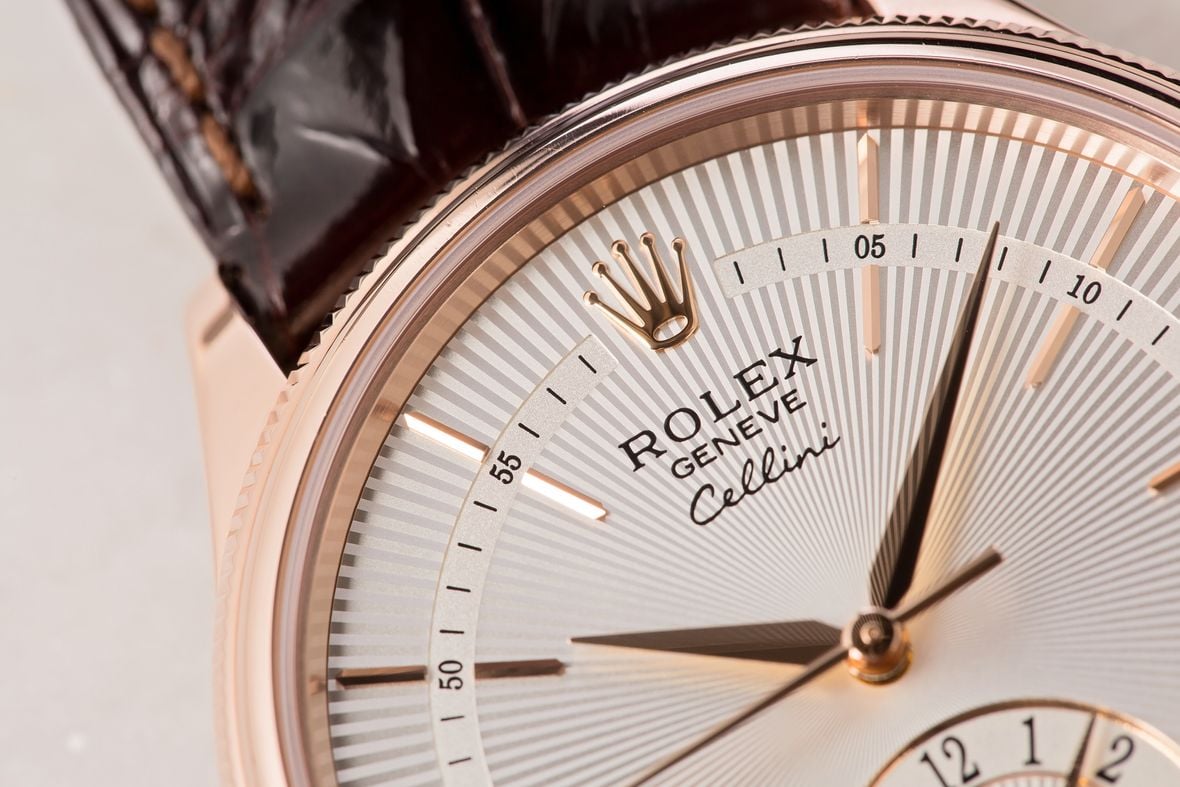 Introduced in 1968, the Rolex Cellini lineup has been home to the brand’s non-Oyster dress watches. Rolex named the collection after the Florentine goldsmith, sculptor, and painter, Benvenuto Cellini, who was known for creating masterpieces during the Renaissance period that are still studied and celebrated today.

The first Cellini models were slim gold dress watches with time-only dials powered by manual-winding movements. They were markedly different from the robust Rolex Oyster watches of the era, which included models such as the Submariner, GMT-Master, Day-Date, Datejust, and Explorer. The “Oyster” designation in select Rolex watches refers to its water-resistant Oyster case. Conversely, Cellini watches never had Oyster cases and were not built with water resistance in mind. 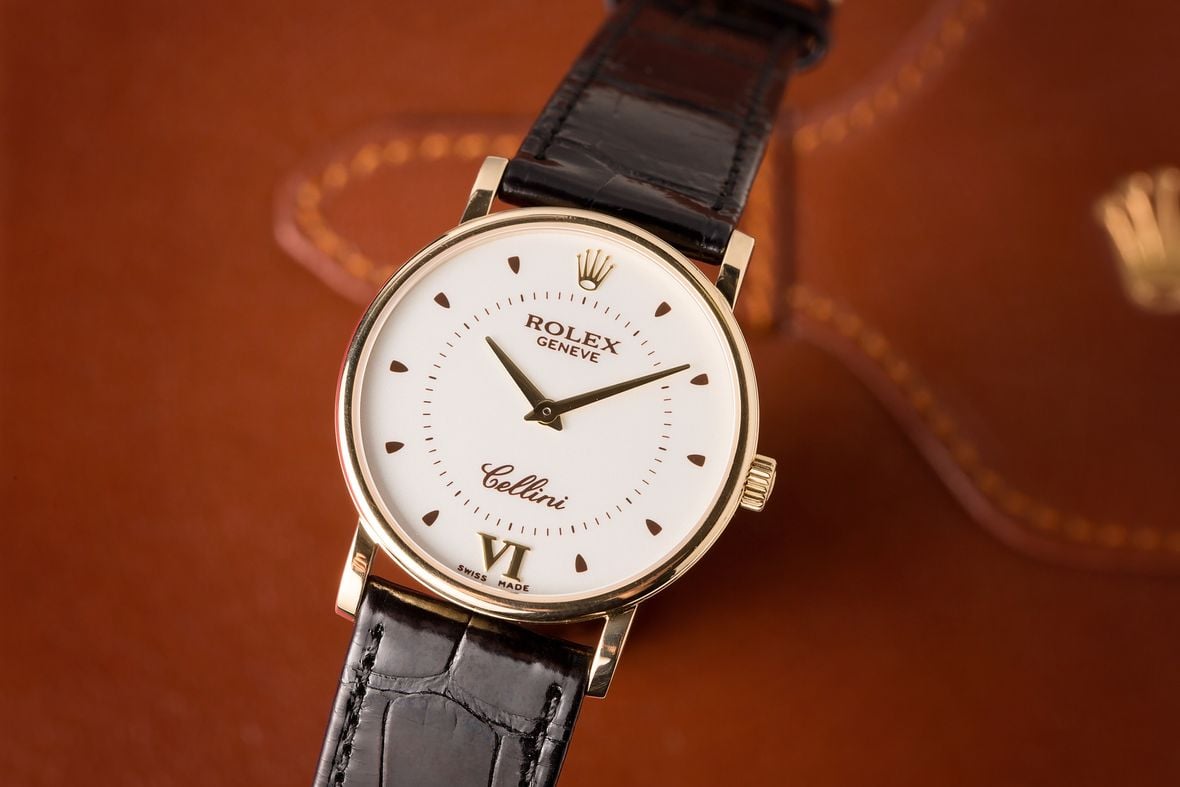 Over the following decades, Rolex expanded the Cellini line with a bevy of models ranging from the eight-sided Cellini Octagon and the asymmetrical Cellini Midas (modeled after the limited edition Rolex King Midas watch from the mid-1960s) to the cushion-shaped Danaos and Art Deco-inspired Prince. Regardless of the watch silhouette, all Rolex Cellini watches are made from precious metals – mostly frequently gold but sometimes platinum.

In 2014, Rolex took a page out of the Oyster collection playbook and redesigned the entire Cellini lineup to be more harmonious. Today, all current-production Cellini watches have 39mm cases, double-stepped bezels, flared winding crowns, and leather straps. Three years later, Rolex released its first moonphase watch since the 1950s in the form of the Cellini Moonphase reference 50535. 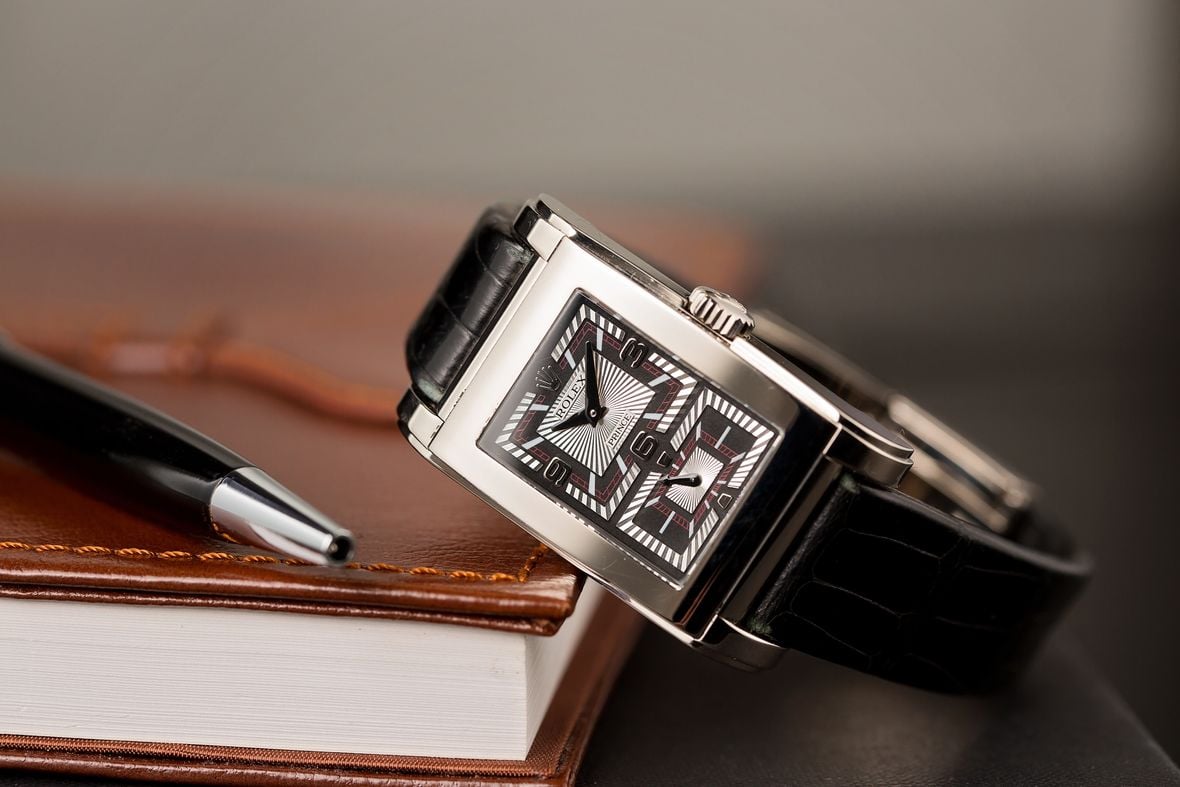 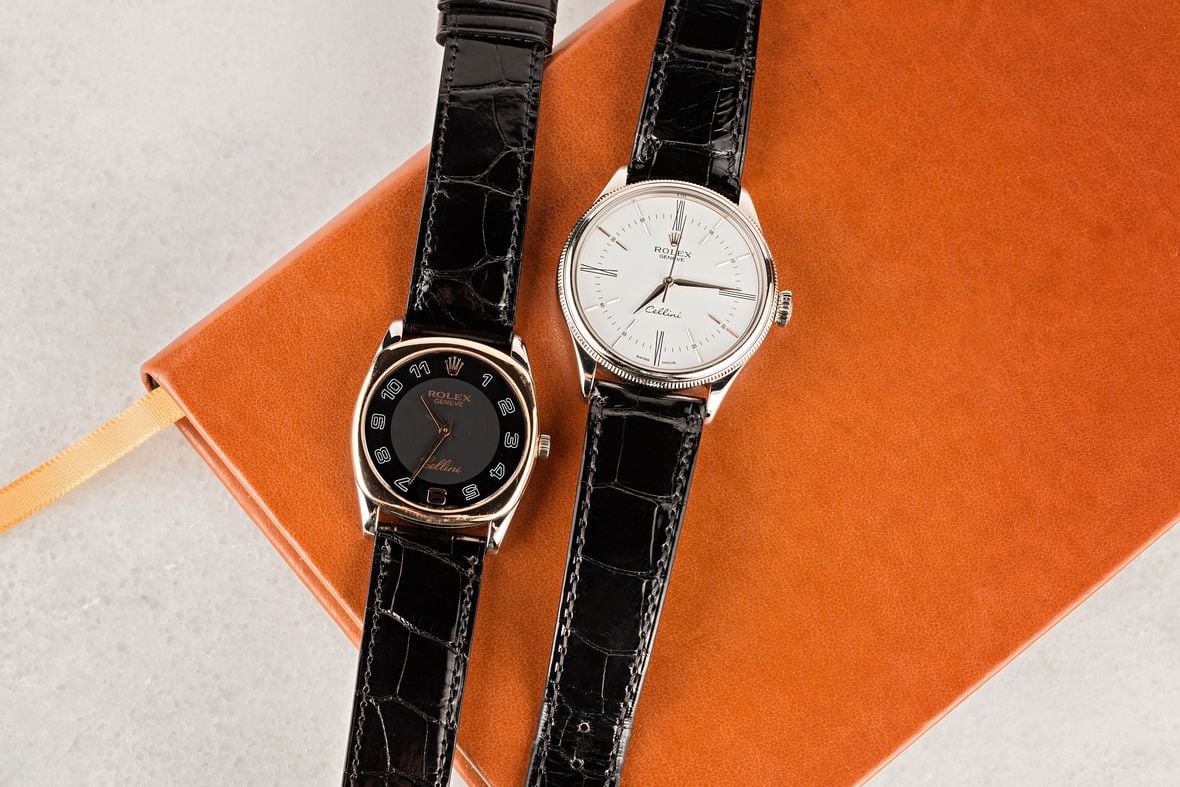 After the standardization of the Cellini collection in 2014, all current-production Cellini watches now have the following features:

– Round 39mm cases in either 18k white gold or Everose gold

– Rolex Genève and Cellini on the dials 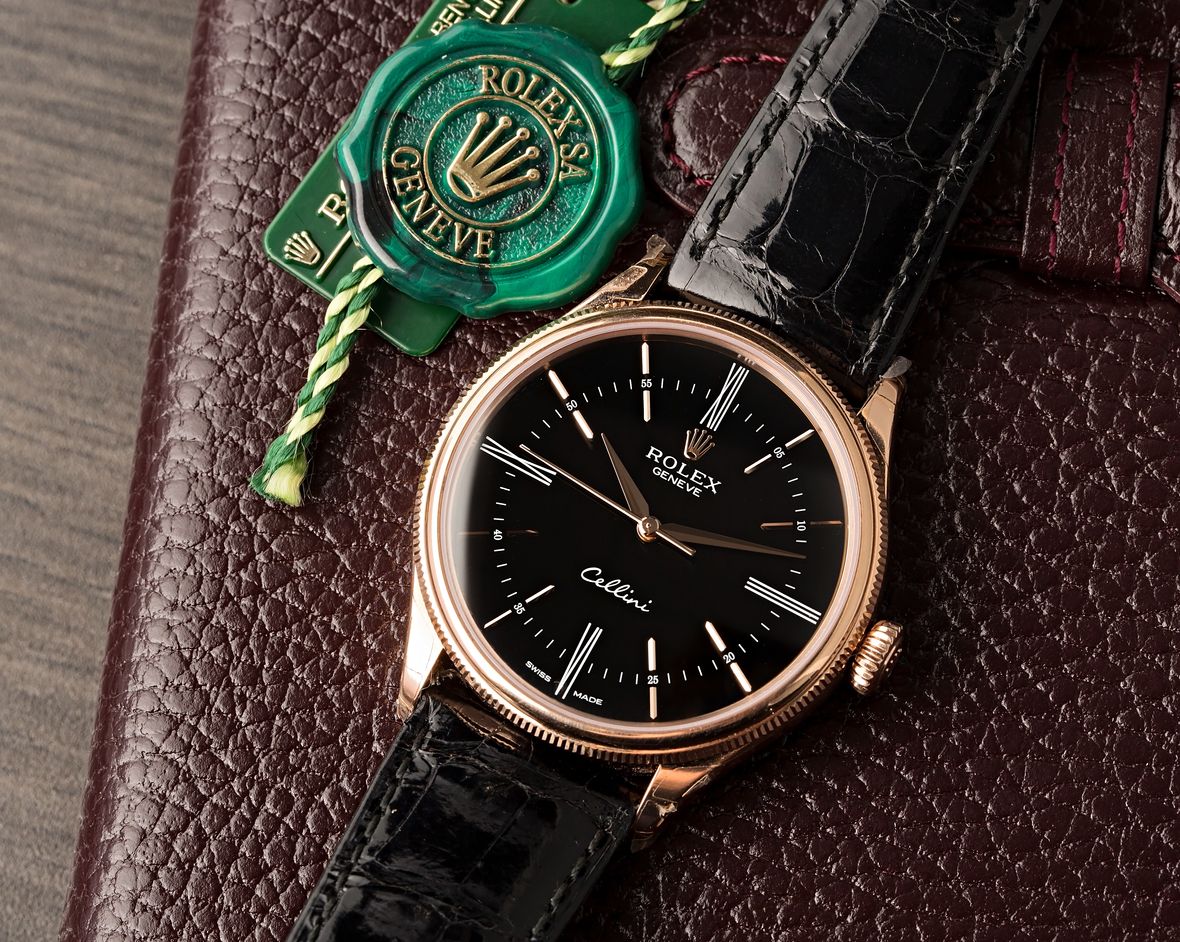 The Rolex Cellini Time is offered with either a white dial or a black dial, both featuring Roman oversized Roman numerals at the four poles alongside long baton-style hour markers that are divided by the inner minute track. Inside the watch is the automatic and chronometer-rated Caliber 3132 movement. The Cellini Time retails for $15,200 (either white or Everose gold) but they can often be purchased pre-owned for 20-30 % less. 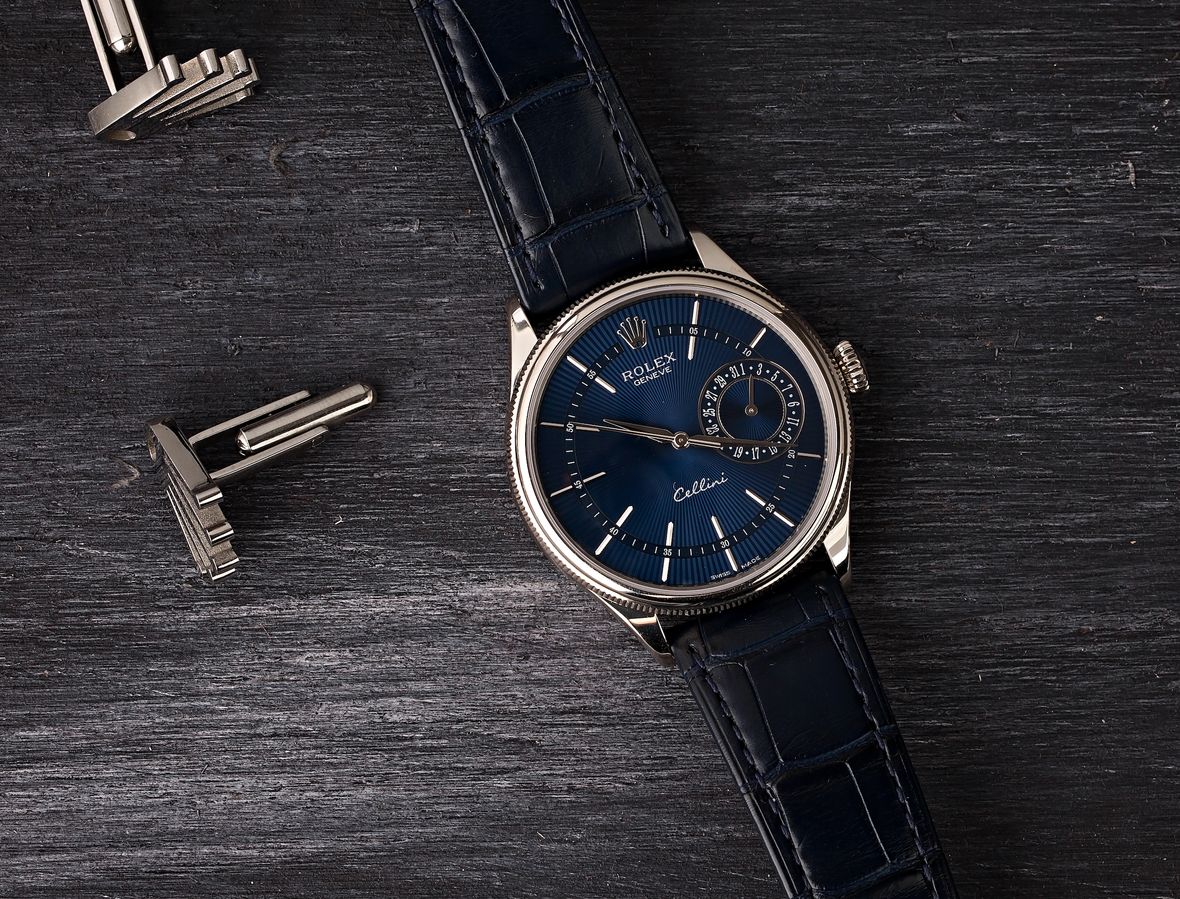 The dials of the Rolex Cellini Date are decorated using a traditional guilloché technique, resulting in lines radiating from the center out towards the periphery. Alongside subtle dial color options like black or silver, Rolex also offers a fantastic blue dial version of the Cellini Date, complete with a coordinating blue leather strap. Powering the Cellini Date is the Caliber 3165 automatic movement and the watch retails for $17,900 but again, a pre-owned version can often be bought for less on the secondary market. 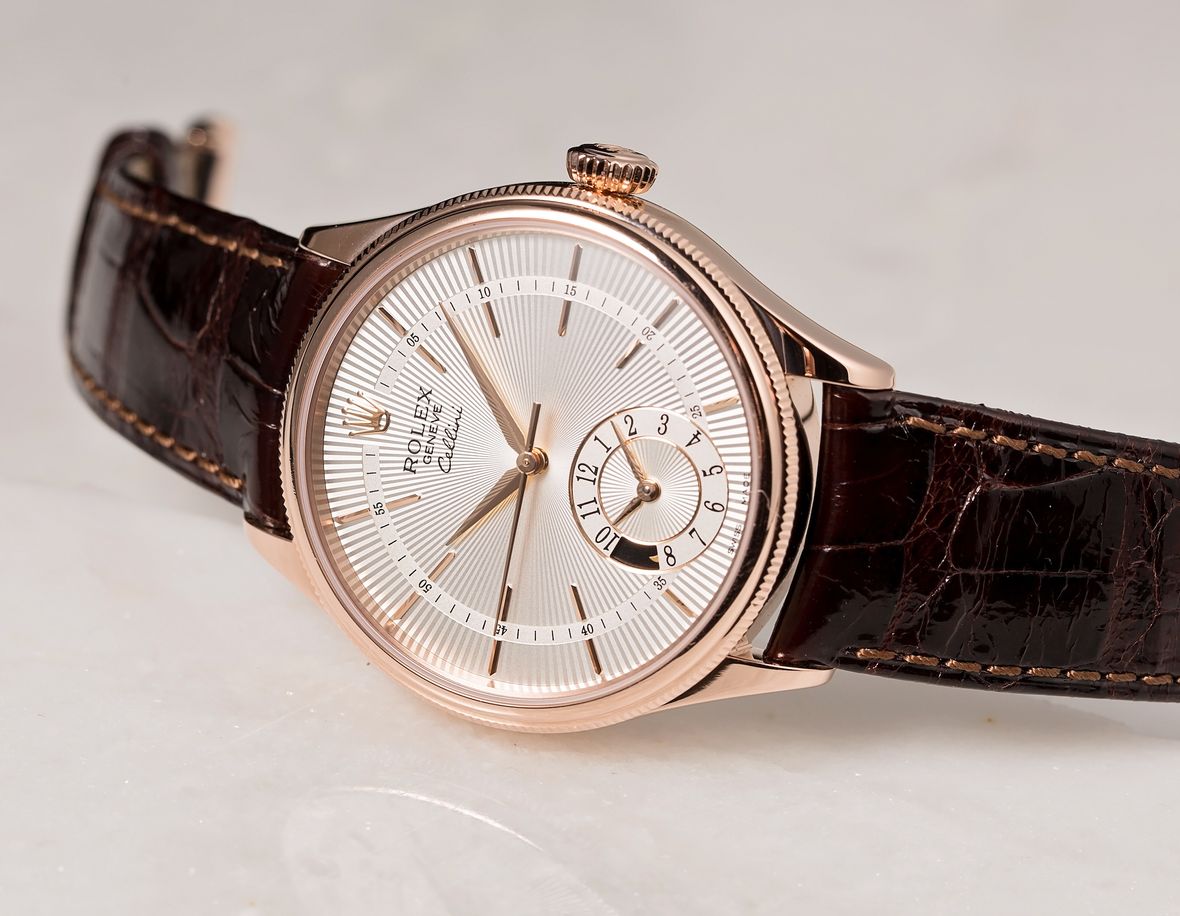 The Rolex Cellini Dual Time allows the wearer to read two time zones simultaneously. Local time is displayed via the central hour/minute/seconds hand while the second time zone is indicated on a sub-dial at 6 o’clock. Since the second time zone display follows a 12-hour format rather than a 24-hour one, Rolex has included a day/night indicator by way of a sun or a moon appearing in a small window within the secondary time zone sub-dial. 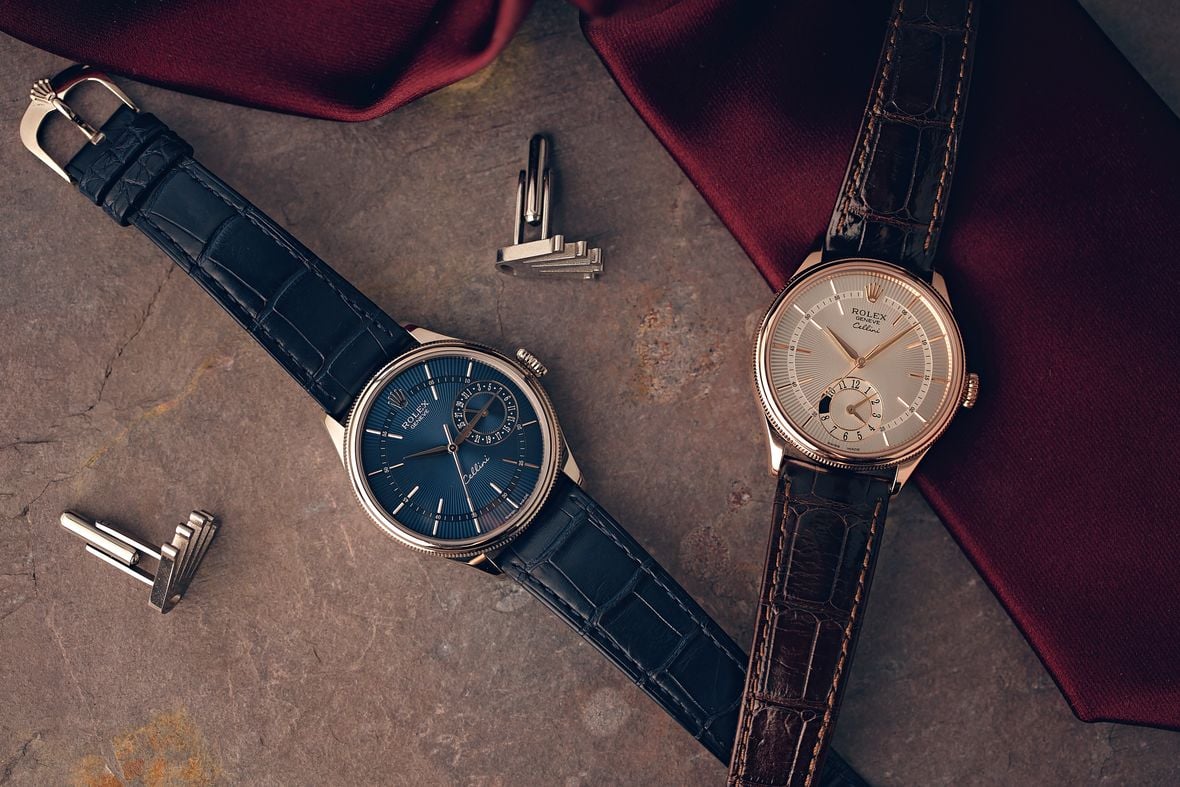 Like all Cellini watches, the Rolex Cellini Moonphase features a 39mm case but it is only available in 18k Everose gold. Therefore, there’s only one version and it is the Cellini Moonphase ref. 50535. The watch is furnished with a white lacquer dial and the date is displayed by a blue hand with a crescent moon tip pointing to the numbers around the circumference of the dial. A blue enameled disc at 6 o’clock serves to show the current moon phase of the lunar cycle, with the moon itself represented by a small disc of meteorite. Encased inside the Cellini Moonphase is the self-winding Caliber 3195 and this unique Rolex watch retails for $26,750. 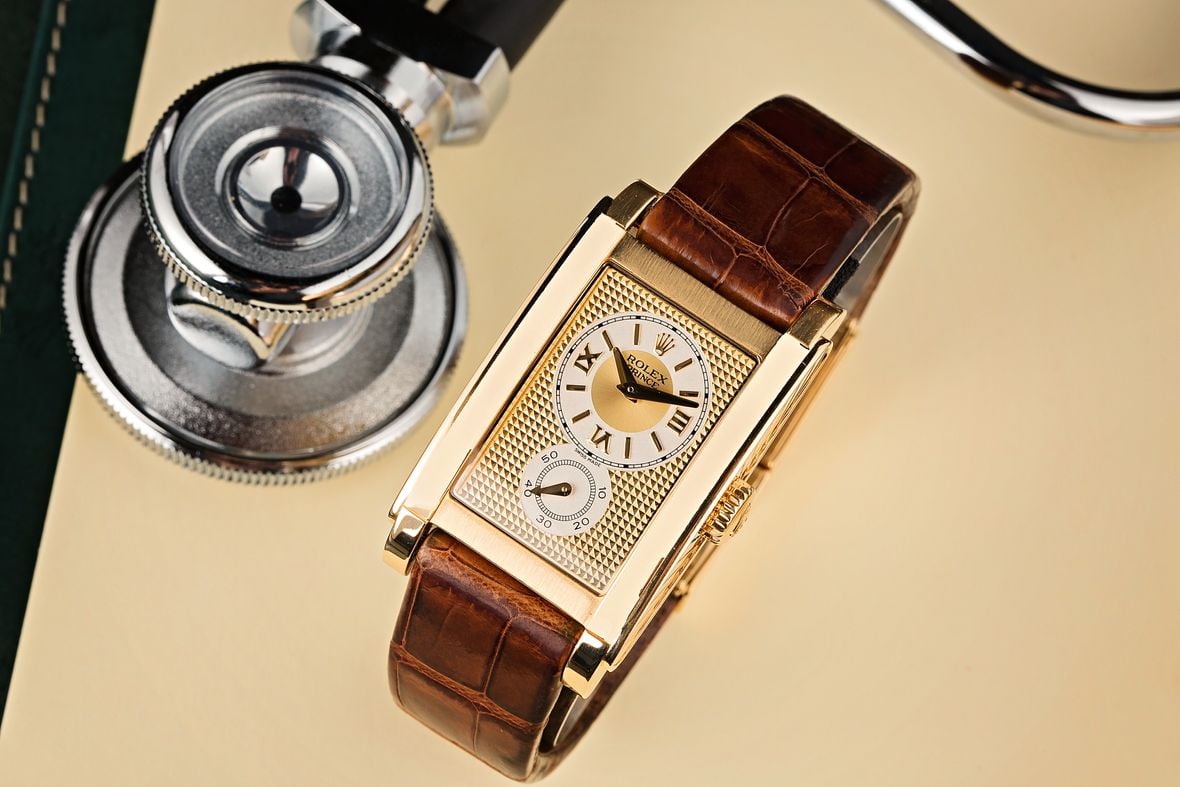 Although no longer produced by Rolex, there are plenty of vintage and discontinued Cellini models to discover on the pre-owned watch market. Despite the immense variety of older Rolex Cellini models, there are a few characteristics that they all share:

– Rolex Genève and Cellini on the dial

Older Rolex Cellini watches can come with all sorts of case silhouettes including round, oval, square, rectangular, hexagonal, octagonal, tonneau, cushion, and asymmetrical. Plus, depending on the model, Rolex used hand-wound, automatic, and even quartz movements to power these now-discontinued Cellini watches. 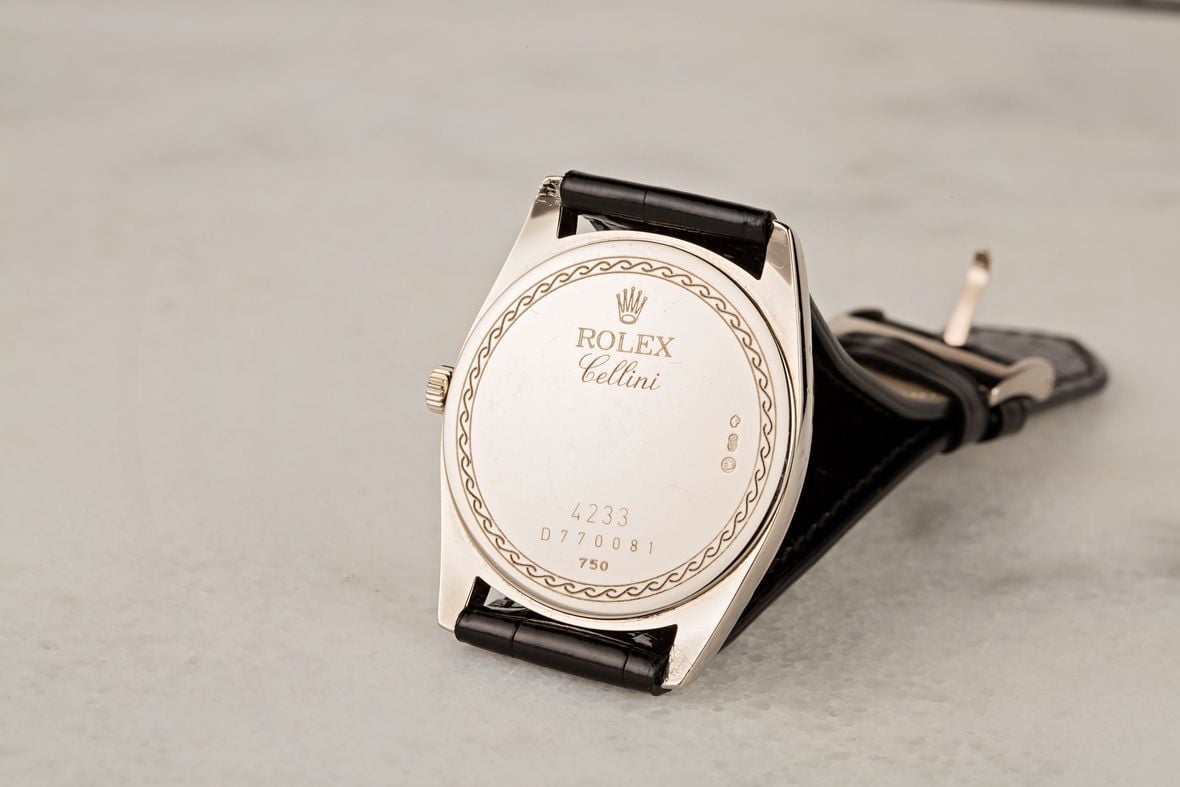 The Most Famous Discontinued Cellini Models

Some notable Cellini models from older Rolex catalogs include:

– Avant-garde designs characterized by asymmetrical cases and inspired by the famed solid gold Rolex Midas of the previous decade.

– Ladies’ watches with round or oblong cases.

– Round platinum cases available in 35mm and 38mm sizes. 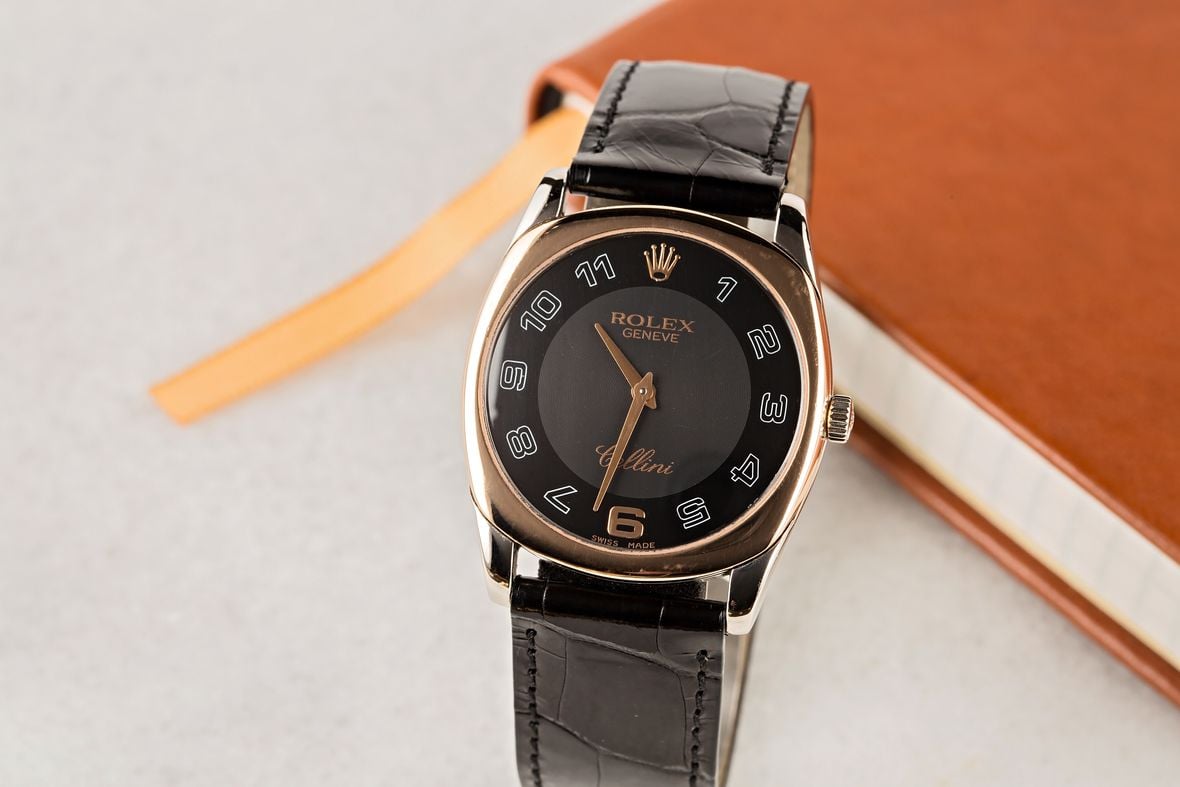 The Rolex Cellini collection is truly refinement at its best, and that’s saying a lot for a brand that’s known for over-engineered watches that are built to be worn every day and last multiple lifetimes. Due to its elegance and sheer modernity, the Rolex Cellini should be touted for its polished versatility; however, it often does not receive nearly the level of attention that it deserves simply due to the massive notoriety of its siblings within the Rolex catalog.

Due to its elegance and sheer modernity, the Rolex Cellini should be touted for its polished versatility. Whether or not you ultimately want to add a Rolex Cellini to your collection is an entirely personal decision. However, it still remains a rather undeniable fact that the Rolex Cellini is the brand’s most elegant and refined line of timepieces, and one that offers exceptional value for the money, especially when purchased on the pre-owned market.

With all of that being said, we hope next time you spot a Rolex Cellini you’ll at least take a second look and consider this as more than just a dress watch, but an important part of Rolex’s history and brand identity. 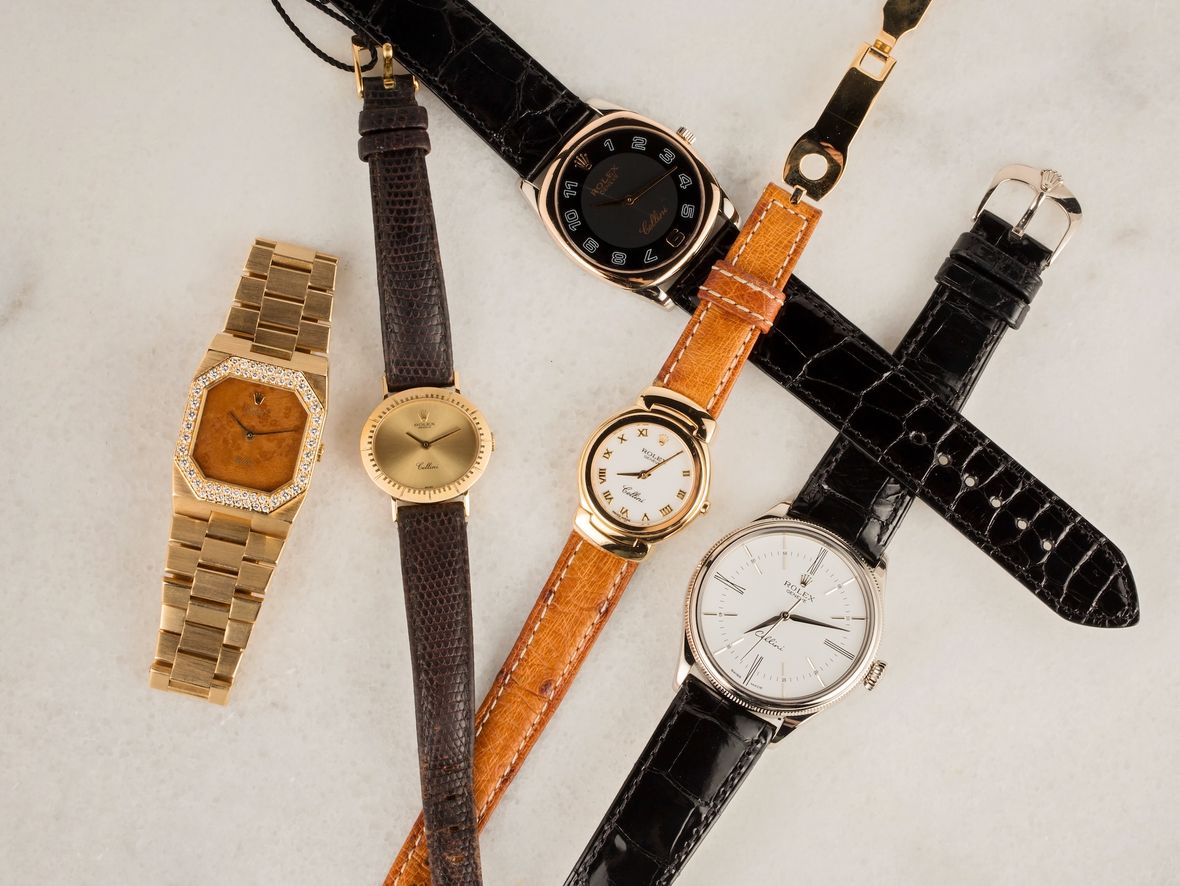