Every good thing has to start somewhere, and that includes an envy-inducing watch collection. Timepiece manufacturers, no matter how big their reputation, know that they still need to sell their wares to survive. They are also fully aware there just aren’t enough people in the world with the means to drop six figures on a model to keep them in business. As a result, pretty much all of them have a portfolio that includes a number of entry-level mens luxury watches and is wide enough to accommodate both the one percent and the rest of us.

The top luxury watchmakers all produce entry-level pieces, those that prop up the rest of the collection and make an ideal buy-in to the marque. They may generally be among the least spectacular in the lineup, but they are still designed to wow their owner and engender some brand loyalty – and you can ask any marketer about the value and importance of satisfied customers extolling the virtues of a product; nothing beats word of mouth. So below, we have picked out a few of our favorite entry-level mens luxury watches with prices that are exceptional for all the right reasons. 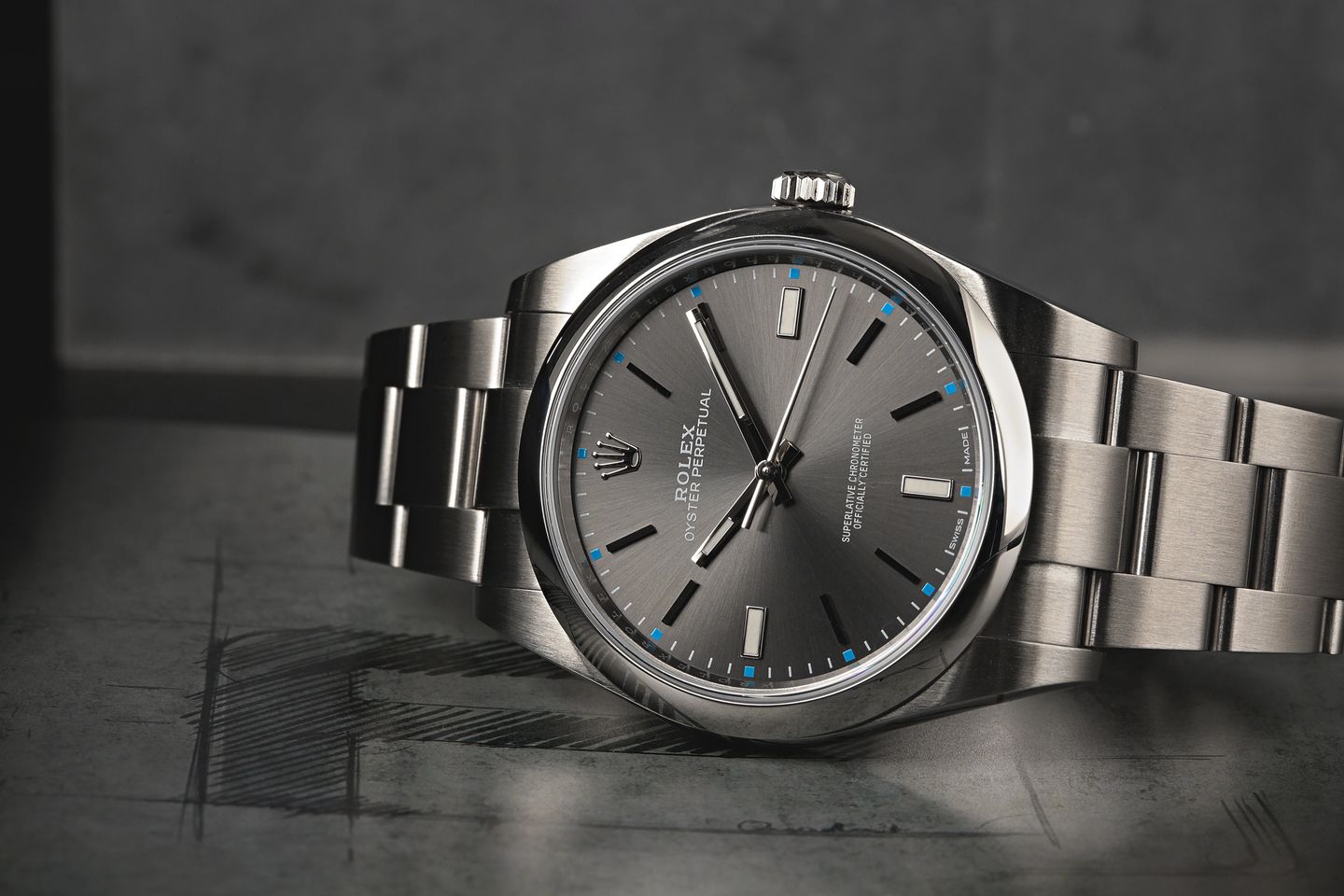 What are the best entry-level mens luxury watches? 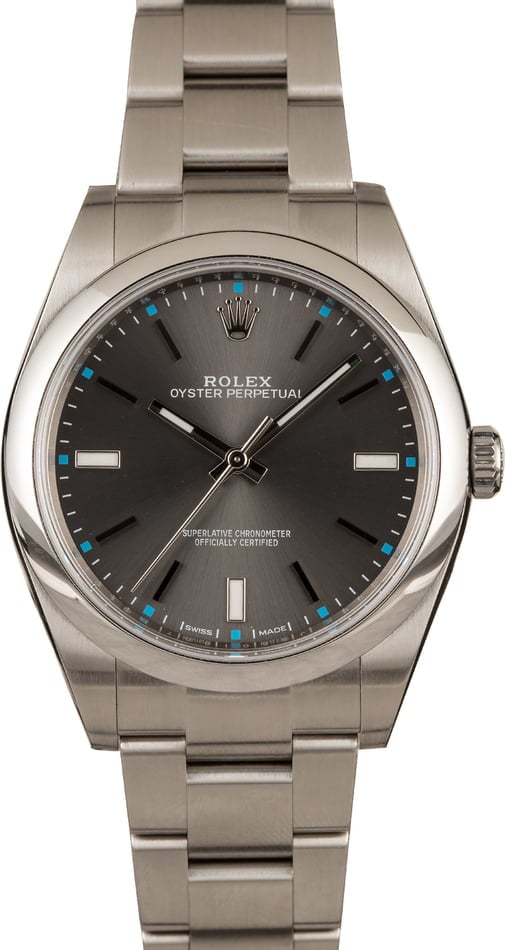 The Oyster Perpetual is the entry-level collection in the Rolex catalog.

Until recently, Rolex only really made fairly simple watches. With the exception of their chronograph (the Daytona), they have long concentrated on perfecting the art of the elegant and resilient three-handed mens luxury watches, sometimes with a date function or GMT complication thrown in to spice things up. It is something that they’ve been both praised and condemned for in equal measure, depending on the person doing the critiquing; however, there is no doubt they produce some of the best time-only models in the industry.

The Oyster Perpetual is the longest-serving, continually-produced series in the entire Rolex catalog, and it acts as the foundation stone on which just about everything else from the brand is built. It takes its name from Rolex’s (and horology’s) two most important innovations: the waterproof case (‘Oyster’) and their self-winding movement (‘Perpetual’).

While there have been gold examples in the past, the current range is an all-steel affair, but one that benefits from the incredibly strong 904L stainless steel that is used throughout the rest of the catalog. The modestly understated design is available in five sizes, with 39mm being the largest. Dial variations range from monochrome black and white to more vibrant blue or purple. Robustly engineered and aesthetically timeless, the Rolex Oyster Perpetual 39 is an absolute standout amongst entry-level watches, offering tremendous value for its retail price of $5,700. 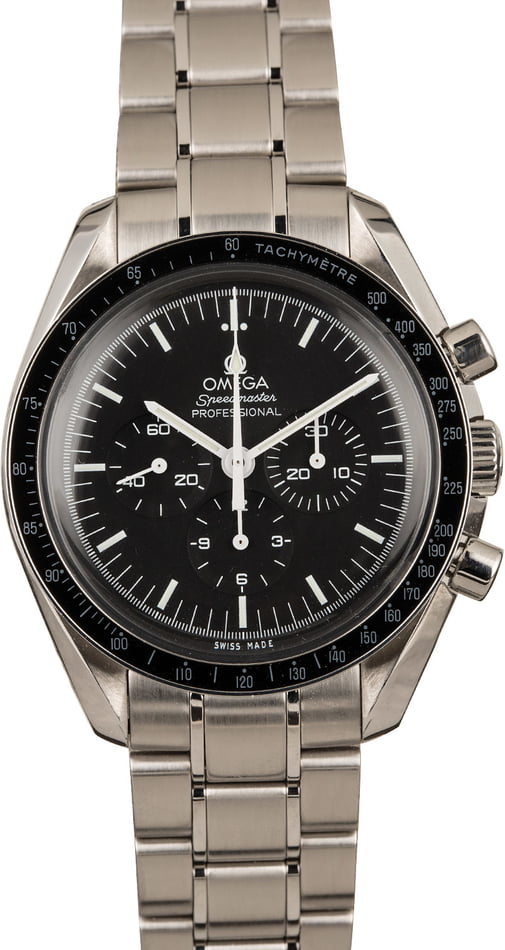 The Omega Speedmaster was the first watch worn on the moon.

The Speedmaster isn’t officially the cheapest model from Omega; that distinction goes to the De Ville Prestige 39.5mm – a fine watch without doubt, complete with the groundbreaking and unique to the brand Co-Axial movement. However, if, for a few hundred dollars more, you could have yourself a bonafide legend, an icon of the watchmaking industry and a chronograph to boot, why would you not go for the Speedmaster?

With an official retail price of just $5,350 the classic Omega Speedmaster Professional Moonwatch is an absolute bargain compared to most mechanical chronographs from other manufacturers, and it is one of the most widely-loved watches in the entire industry. This one is the classic version that has been flight-qualified by NASA, making it all the more impressive that it can be obtained for anything close to what could be considered an ‘entry-level’ price.

One of a total of 33 Speedmasters in the current catalog (and it’s possible to spend a great deal more on one) its styling is as classic as it gets. A black dial and bezel with high-contrast white handset and indexes for perfect legibility, the trio of sub-dials are present and correct as is the tachymeter bezel (the original reference from 1957 was the first time the scale had been moved to the surround from the edge of the dial to free up more room). Underneath, while not a Co-Axial like the De Ville, is the Omega Caliber 1861, a direct descendant of the famous manually-winding movement that powered the actual watch that went to the moon on the arm of Buzz Aldrin. In all, and whichever way you slice it, the Speedmaster is a true classic and one of the industry’s outstanding bargains. 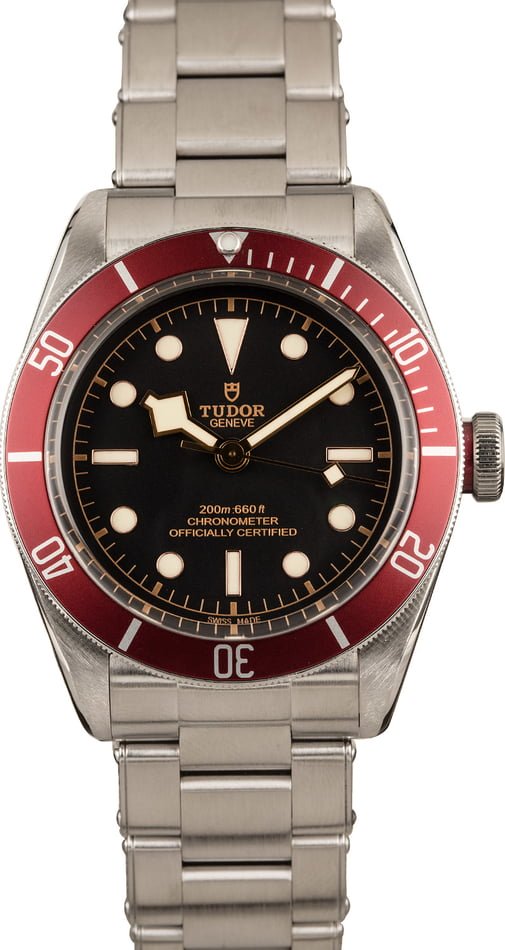 While Tudor will always be viewed as the little brother to Rolex, the brand produces its own catalog of incredibly well-built mens luxury watches. For decades, the primary difference between offerings from Rolex and Tudor was that Tudor watches used outsourced movements, while Rolex fitted their watches with their own in-house calibers. However, now Tudor manufactures its own in-house movements, which makes the brand’s latest generation of watches exceptionally compelling value propositions.

The most ‘entry-level’ offerings in Tudor’s catalog still use ETA-based movements; however, models featuring their in-house calibers sell for only a few hundred dollars more. With retail prices starting at $3,400 the Tudor Black Bay Heritage diver is not the brand’s least expensive option; however, the model offers exceptional value for money when you consider that you get a professional dive watch with 200 meters of water resistance and an in-house chronometer-certified movement for significantly less than the least expensive models from Rolex’s current catalog.

Drawing inspiration from the pioneering dive watches from the 1950s, the Tudor Black Bay offers vintage style in a durable package with a modern state-of-the-art movement. Additionally, the Black Bay dive watches are available in three different colorways (not to mention both a smaller sized version and a GMT variant), along with the option of either a leather strap, fabric strap, or metal bracelet. Tudor may not ever be able to fully step out from the impossibly-large shadow of its parent company; however, being compared to Rolex is never a bad thing, and the brand makes some of the best mens luxury watches on the market. 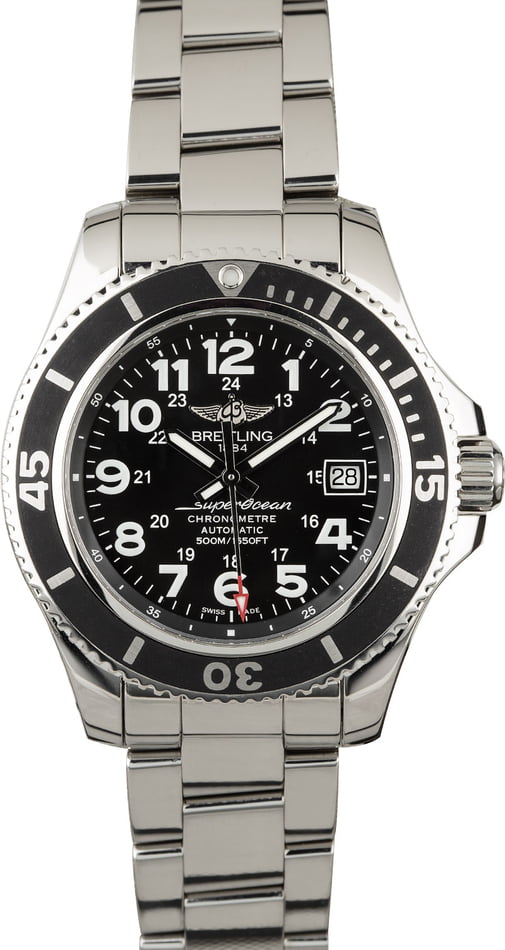 With 500 meters of water resistance, the Breitling Superocean is more than capable of keeping up with you.

The Breitling range has grown considerably since appointing the great Georges Kern as CEO in 2017 and receiving a healthy injection of cash from Europe’s largest private equity firm, CVC Capital Partners, who acquired the brand the same year. Gaining at both ends, Kerns has overseen a return to a more vintage-inspired aesthetic, and at the same time, Breitling has been leading the way in state-of-the-art wearable luxury tech. There are now nine separate collections of mens luxury watches in the catalog, with attractively priced options in almost all of them. For the real entry-level though, we turn to the Superocean line, the range of dive watches which dates back to 1957.

The Superocean Automatic watches come in four different sizes, with the 36mm and 42mm retailing at the same price of $3,450, while the 44mm and 46mm cost slightly more. The styling is also distinctive amongst the hyper-masculinity of the rest of Breitling’s offerings. Dials can be had in traditional black and white or you can mix things up and go with blue, bright yellow, or eye-catching orange. It is a watch that doesn’t take itself too seriously and even borders on light-hearted fun. However, they are all still perfectly capable. The 36mm has the lowest water resistance at a very respectable 200m, but the 42mm version bumps things up to 500m. Additionally, the larger models have even greater water resistance and are safe to 1,000m and 2,000m, respectively.

Readability was obviously a top priority for the designers and the hour indexes are positively enormous, pointed out by thick, lume-filled hands, while the seconds hand is topped off with a large red arrowhead. Providing power is the ETA-based Breitling 17 movement. With 28,800vph and with a 42-hour reserve, it is one of the most tried-and-true calibers in the entire catalog. While wrist size will likely be the determining factor in which model to get, the Superocean 42 is a great value for money and represents one of the most compelling offerings among the various dive watches out there at this price point.